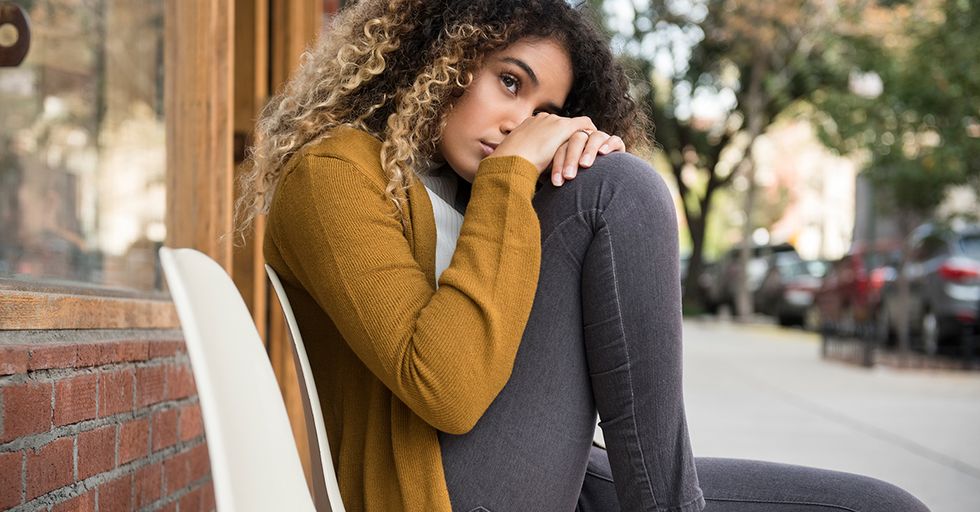 Anxiety affects more people than you may realize.

According to the Anxiety and Depression Association of America, anxiety disorders affect 40 million adults in the United States age 18 and older. That's 18.1 percent of the country's population.

If you're part of that 18.1 percent, you don't need me to tell you that dealing with anxiety is stressful, saddening, and really hard at times! It can be downright exhausting going through life as an anxious person. Unfortunately, you may actually be saying things to yourself that make your anxiety even worse. But don't worry. Today, we're going to talk about the harmful things you may be saying to yourself, as well as go over alternative things you can say to combat anxiety.

Obviously, these tips and tricks are not to be taken as medical advice, and you should be sure to consult a therapist if you would like a professional opinion and/or treatment. In the meantime, here's a look at the things you say to yourself that may actually be hurting you — and ways to turn that harmful self-talk into beneficial self-care.

Sometimes, dealing with anxiety can be a bit of a vicious cycle.

You're feeling anxious, which causes you to repeat negative messages to yourself...which in turn cause your anxiety to spiral even further. But you can put an end to that!

You can do this.

Rather than letting yourself fall prey to the well-worn negative messages you send yourself, try taking a step back and saying something else instead.

It's going to take some practice, but you can totally do this.

OK. Deep breaths. Ready? Let's start with a big one:

When you're feeling anxious, it's very easy to start beating yourself up. But if you stop to think about it for a second, you'll realize that this doesn't make sense. You can't bully yourself into not being anxious anymore. That's not how it works.

Instead, try saying: "I made a mistake and I'm feeling insecure."

It's easy to fall into the trap of thinking that because you're feeling anxious right now, you will feel anxious forever. But it's not true.

After all, you cannot predict the future.

Anxiety may sometimes make you feel as though you can predict the future (e.g., "If I don't get this promotion, I'll be unhappy forever."), but you know that is not possible.

Instead, try saying, "I'm going to take things one day at a time."

Maybe you will get that promotion! And maybe you won't. Either way, the anxiety you're feeling will not last forever. Reminding yourself that you cannot predict the future may help.

"This is the worst thing ever."

People who struggle with anxiety sometimes tend to catastrophize their current situation. You may find yourself thinking, "This is the worst thing ever and anything I do to fix it is going to fail."

But these catastrophic narratives only make things worse.

Instead, acknowledge your actual feelings.

Again, take a step back from Worst Case Scenario Land and acknowledge what you are actually feeling in that actual moment. Even saying something like "I am scared right now" can put an end to the vicious cycle of catastrophizing and let you focus on what you can do at the moment to feel better.

"I should be feeling better."

Although anxiety can manifest in physical ways, a lot of it is mental. As a result, you may start thinking that since it's "all in your head," you should be feeling better.

But that puts so much pressure on yourself!

That's not fair to your mind or to the process of healing. Forget what you think "should" be happening.

"I'm looking forward to feeling better." "I want to do a better job of [whatever]." This is a much more productive way to address your anxious thoughts.

Playing the "What if?" game is dangerous, but that doesn't stop millions of people from doing it every day. "What if I don't get the job?" "What if my relationship falls apart?" "What if I lose all my money?"

If a sentence starts with "What if," you probably want to avoid thinking it.

Instead, try doing a breathing exercise to stay focused on the now.

Asking "what if?" just borrows anxiety and worry from a situation that isn't even happening — and may never happen! Rather than investing all of that worry and energy in hypotheticals, focus on the here and now.

"This is going to ruin everything."

Sometimes, things don't go according to plan. Unfortunately, that's just a part of life. Your anxiety may make you feel like a small hiccup — or even a large detour — can ruin everything. But remember: You can't control everything.

Instead, focus on the things you can control.

You can only control yourself and your reactions to things not going according to plan. Rather than assuming that everything is ruined and spiraling into negative thoughts, try to be proactive.

Also, remember to be flexible.

Sometimes you may need to adjust your expectations. That's just another part of life. If you enter into a plan with the understanding that things may not always work out exactly as you intend them to, your anxiety is less likely to take over when something unexpected happens.

This is yet another thing you may be saying to yourself that is actually making your anxiety worse. Once again, blaming yourself for something going wrong is not helpful.

Instead, first acknowledge that everything is not your fault.

Then, make a plan.

If something goes wrong, try not to focus too much on what actually went wrong. Instead, make a plan of what you're going to do going forward to avoid those types of mistakes. Write it down or say it out loud to yourself.

If you've had bad moments of anxiety in the past, you may feel discouraged when you start to feel anxious again. It's easy to get into the mindset of thinking that you will always be stuck in the cycle of anxiety.

Instead, try to be open to change.

Locking yourself into thinking things can never change can actually prevent things from actually changing. Remind yourself to be open to handling things differently this time in the hopes of securing a different outcome.

When you're struggling with anxiety, time sometimes feels as though it's standing still. It can be hard to get from one second to the next, let alone making it through an entire day. You may start to feel as though you can't do it, and you may say exactly that to yourself.

Instead, say, "This is temporary."

But you can get through it. You have done it before. You know that the anxiety you are feeling is temporary even when it doesn't feel temporary. Try to repeat to yourself, "This is temporary" for as long as it takes. It will not last forever.

When you start feeling anxious, it can be tempting to start to boss yourself around and command yourself to "just calm down." But that's not a very kind way to treat yourself! You wouldn't tell someone else in the midst of an anxiety episode to "just calm down," right?

So don't do it to yourself!

Instead, acknowledge to yourself, "I'm feeling anxious/scared/nervous. But this is temporary. I will get through this, but everything that I am feeling right now is perfectly valid." Because it is!

The way we talk to ourselves — both during anxious times and just in everyday life — can have a great impact on our entire lives. If anxiety is something you struggle with, maybe try changing up the messages you send to yourself. And again, it may be beneficial to speak with a therapist as well! In the meantime, don't forget to share this with someone who is trying to take their self-care journey seriously!