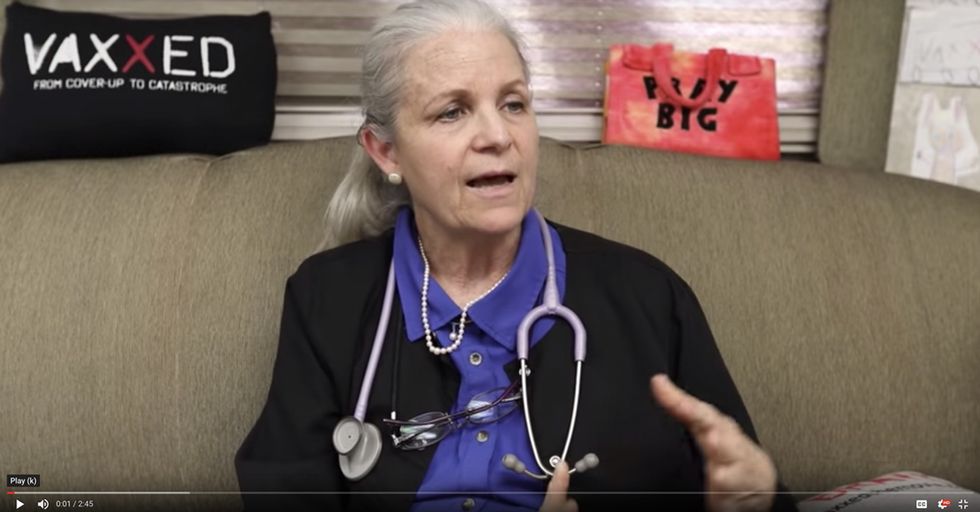 We're finally getting sweet justice against groups that profit off of spreading misinformation about vaccines. Youtube is officially taking a stand against anti-vaccination videos on its platform by not allowing any ads to run on anti-vax content citing a ban on “dangerous and harmful” material.

BuzzFeed News reported the changes, saying YouTube had confirmed the decision after the publication contacted seven companies who were unaware that their advertisements were running on anti-vaccination videos. It’s the latest of several ways YouTube has recently restricted conspiracy theories and other objectionable material on its platform.

In addition to demonetizing this type of content, YouTube has introduced a new information panel specifically for vaccines. In the past, these panels appeared on anti-vax videos that explicitly mentioned the measles, mumps, rubella (MMR) vaccine. Now, they will also appear on all videos about vaccines and have a call-to-action directed to the Wikipedia page for “vaccine hesitancy,” which the World Health Organization listed as  “one of the top ten global health threats of 2019.”

This may not completely stop the spread of misinformation or people posting anti-vax content on YouTube, but it’s a start and moving these groups away from monetizing on it will hopefully deter the anti-vax content.

The move comes after advertisers on YouTube pulled their ads from videos, following inquiries from BuzzFeed News.

“We have strict policies that govern what videos we allow ads to appear on, and videos that promote anti-vaccination content are a violation of those policies," a YouTube spokesperson said.

This falls under a policy aimed at prohibiting the monetization of videos that may have “harmful or dangerous" content.

The three channels have a total of roughly 473,000 subscribers.

This all started after reports that YouTube was algorithmically promoting anti-vax videos to users.

Advertisers were told that their ads were being run on these videos and started to pull their ads from the site.

Although the current 120 cases of measles had not moved YouTube to be more vigilant of anti-vaccination content, it’s a step in the right direction.

Many people and lawmakers are now only looking at YouTube to stop the spread of misinformation regarding vaccines.

The social media giant is working on stopping the spread of anti-vaccination content from also being algorithmically recommended to users.

Buzzfeed also reported that YouTube’s “Up Next" algorithm suggested follow up recommendations for anti-vax videos to viewers.

And within these videos, they found ads and alerted those advertisers.

The real horror is how much misinformation there is about vaccines.

The advertisers reached out to YouTube to pull their ads.

Advertisers do not want to be mixed up in a highly controversial topic that directly affects public health.

A spokesperson for YouTube advertiser, Retail Me Not told Buzzfeed, "When we purchase programmatic media, we specify parameters that restrict the placement of our ads from association with certain content."

And quite a few other companies questioned what was happening with their ads on YouTube.

Companies that asked YouTube to stop their ads from running during anti-vax videos included Brilliant Earth, CWCBEexpo, XTIVIA, And SolarWinds.

Nestle, AT&T, Hasbro, Kellogg, and Epic Games were among the brands that removed their ads over this controversy.

YouTube told USA Today that “Any content – including comments – that endangers minors is abhorrent, and we have clear policies prohibiting this on YouTube. We took immediate action by deleting accounts and channels, reporting illegal activity to authorities, and disabling comments on tens of millions of videos that include minors."

YouTube is working hard these past few weeks and it’s been a long time coming.

In addition to stopping the anti-vax videos from running ads, YouTube is now including a Wikipedia link to the “vaccine hesitancy" page on every video that mentions vaccines.

The World Health Organization describes vaccine hesitancy as one of the top ten global health threats in 2019.

Concerned with the measles outbreak, US Rep. Adam Schiff demanded that Facebook and Google, which owns YouTube, address the risks of the spread of medical misinformation about vaccines on their platforms.

YouTube had not taken any action until now. Facebook did respond and was taking steps to reduce the misinformation of health-related issues.

After BuzzFeed's report, YouTube said, “Like many algorithmic changes," the alterations to its Up Next recommendation system “will be gradual and will get more and more accurate over time."

They are also working on limiting the reach of videos with other conspiracy theories.

Such as the "flat-Earthers."

Many have complained on social media that there seemed to be more videos against vaccines than there were about the safety of vaccines. This is most likely due to their algorithm being most about retention than actual content the user wants to see.

Larry Cook, the anti-vax leader behind StopMandatoryVaccinations, said on Facebook that his “entire channel" was demonetized, but that YouTube hadn’t contacted him about the change.

His Facebook page also seems to be completely shut down since this is another social media platform that is cracking down on anti-vaccine theories.

Pinterest has simply stopped returning results for searches about vaccinations.

Saying it was “better not to serve those results than to lead people down what is like a recommendation rabbit hole."

People are showing their support for YouTube and other social media platforms that are taking responsible steps to stop the spread of anti-vaccination discussions.

They are doing a great service for the public health.

Can we get an amen?

Putting a full stop on allowing these anti-vax video creators to profit can more than likely deter them from making more.

Have you ever had a discussion with an anti-vaxxer and they said you need to do more research? Well, most of their so-called research came from an anti-vax video on YouTube.

The beliefs amongst anti-vaxxers can run so deep, that they don't trust doctors or medical professionals who have done extensive research on vaccines.

It's a public health concern that should be monitored.

Thankfully, social media platforms are now taking active steps to counteract the spread of misinformation on their sites.

Anti-vaccination discussions have been heated for years, with many of them trying to reason with individuals that are against vaccines. Some have felt that their arguments are so misinformed and dangerous that the only way they can possibly get through to them is with memes.

And we live in an age where the internet will come for you and they are going after anti-vaxxers.

Cringe-worthy meme but it's needed to get a message across.

There are people that are not vaccinating their children from diseases that are life-threatening. It doesn't get more extreme than that.

Is there an essential oil to stop the spread of conspiracy theories?

We definitely need some of that.

Some argue that it should be the law to vaccinate children.

The whooping cough is extremely contagious and dangerous for infants, unfortunately, we have parents that are not protecting their babies against it.

What year are anti-vaxxers living in?

Apparently, they don't want to be in the year 2019 where we have vaccines and science-backed research regarding their safety and ability to save lives.

There is still much to do but the fact that we now have swift action from social media platforms that are targeting the ability of anti-vaccination groups to spread misinformation and fear to unknowing parents is a great thing!