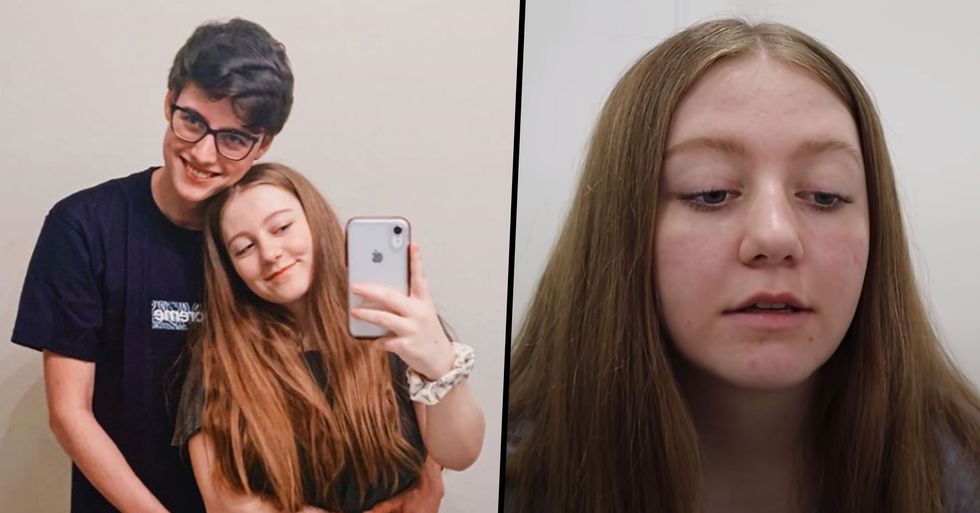 Camryn Clifford has decided to open up about the events that lead up to her husband, Landon's death. The thirty-seven-minute youtube video goes into great detail about what was really going on behind the scenes.

This article contains subjects that some might find distressing...

Landon Clifford has been taken too soon.

Aged only nineteen, the parenting YouTuber has devastatingly died.

His wife, Camryn has decided to reveal the events that led up to his tragic passing...

But warns viewers: "if you are easily triggered, I wouldn't watch this video."

Landon launched his YouTube channel when he and Camryn fell pregnant aged only sixteen back in 2017.

Cam and Fam was born, and it quickly gained traction, with it today having over 1.2 million subscribers.

Cam and Fam documents the lives of these teenage parents...

And follows Landon and Camryn as they bring up their daughters together.

However, despite the family's happiness...

Disaster was just around the corner.

Camryn broke the heartbreaking news on her Instagram page, where she paid tribute to a "compassionate, loving, thoughtful, kind, and gentle" man.

Alongside a photo of her hand on his chest as he lay in a hospital bed, she wrote:

"He was an amazing husband and the best father those girls could have ever asked for. It saddens me deeply that they will never get to truly know him."

Quite understandably, Camryn is in a tremendous amount of pain.

But she is determined to stay strong for her girls. Her post concluded: "Words can not come close to describe the pain I feel. All I can do now is make sure our girls know how much he loved us. He’s looking down on us from heaven and his light will shine through the clouds when we look up at him. May he rest peacefully."

Tributes have flooded in...

is it just me or does landon clifford dying not even feel real like i’m still in shock i can’t believe this is read… https://t.co/YMDgfHLnFO
— jenna scerb (@jenna scerb)1598138340.0

But, amid the heartfelt tributes, everyone is wondering the same thing.

How did someone so young and full of life die so unexpectedly?

Camryn hadn't previously revealed the events that lead up to Landon's tragic death...

But felt she should tell her subscribers, who have followed their journey from the beginning, how he died.

She posted a video to their Youtube channel on Thursday, which has already had over 7 million views...

Clifford opened up about Landon's story, and his struggle with anxiety, depression, and ADHD.

Before revealing the tragic events that took place on August 13.

"This is definitely going to be the hardest video I've ever had to make," she began. "It took a while for me to obviously get over the initial shock and to just gather my feelings and my thoughts and to feel like I'm ready to tell his story. It's a very important story to be hold and it's my job to tell it, but it's not an easy story to tell, at all."

Camryn said she had always been open about her struggles with depression, but Landon would rarely talk about how he was coping with his mental health.

"Behind the scenes, he was always just kind of going through his own stuff," she said. "He has had mental health issues for as long as I have known him."

Landon started to show signs of depression while Camryn was pregnant with their second child.

"Many factors just kind of contributed to the fact his mental health wasn't great," she said. He decided to speak to a psychiatrist and get medication to help him get back on track.

Although Camryn said he "did the right thing" getting help, "He fell into a hole" of abusing his medication. She said it was "a very, very vicious cycle" that was "very unhealthy."

They decided to take a break from YouTube when their second daughter was born, as having 2 children to care for, and Landon abusing his medication was too much to deal with.

Things seemed to be picking up, as they both got into a healthier routine. But, on August 13, everything changed...

Camryn said Landon "seemed like he was having a good day," although she could tell "something was wrong," she said. "He said he was sorry for everything he put me through. It was really hard on me when I was pregnant and he was heavy in his addiction and he wasn't himself during that time and he was apologizing to me for everything."

"I could tell he was putting a lot of blame on himself. I talked to him, I told him that I loved him and I forgave him and things were different now," she continued.

"I gave him a hug, a kiss and I told him I love him and that it's okay and that no matter what he ever did, I would always love him and be here for him. After that he seemed okay."

Landon told Camryn he was going to take a break, which was a normal part of his routine. But after thirty minutes, she decided to look for him.

Camryn later found Landon in the garage, where he was not moving, and appeared to have taken his own life.

She immediately called 911, but couldn't feel a pulse. "I knew in that moment that he was gone," she said. "There is no words to describe how I felt at that time."

When paramedics arrived they were able to get a pulse and took him to the hospital but he was later pronounced braindead. Before his death, Landon registered to be an organ donor, with Camryn stating, "even in death he was caring for other people."

"There was no note, no explanation, but I know him very well."

"I'll never truly know the answer, but I know Landon and I know he was not thinking rationally," she continued. "He's a very impulsive person and he does things without thinking. I think he felt guilty about how everything has gone for the past year and I think he just felt like a burden and we'd be better off without him, which is so far from the truth."

Camryn said she wanted to tell his story to show people "what comes after" someone takes their life.

"I know, deep down, that you care about your loved ones, I know Landon did and you need to think about that before you do it, think about who's gonna have to find you," she said. "Think about everyone who loves you."

"He just had so much more life to live."

You can watch Camryn's video below...

Rest in peace Landon. For more on the heartbreaking losses we've experienced this year, keep scrolling...