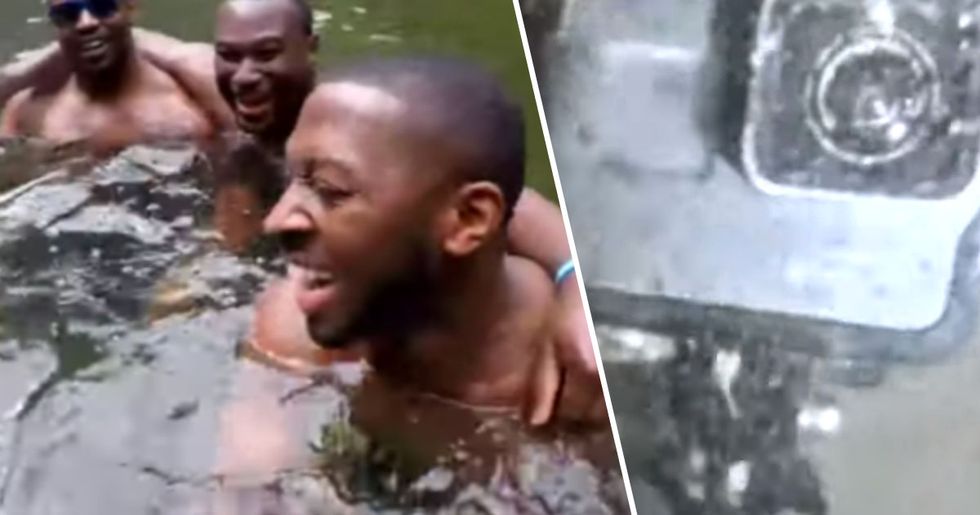 2 years ago, Richard Ragland tragically passed away after he drowned at a waterfall in Foster Falls State Park. Richard went for a swim beneath the waterfall, but never resurfaced again, leaving his heartbroken parents wondering what had happened in the moments leading up to his death.

But now, the footage from the GoPro that he used on that fateful day has finally been recovered... by YouTube vlogger and self-proclaimed "treasure hunter," Rich Aloha Abernathy.

Aloha, who is a licensed diver, recovered the GoPro when diving and hunting for treasure at Foster Falls and got in touch with Richard's family as soon as he watched the footage from the camera. And his parents, who haven't yet brought themselves to watch the full video, have gone public with the discovery, which may finally give them the closure that they need and deserve after all these years.

Keep scrolling to see the tragic video, which shows Richard enjoying and living his life to the fullest in the moments leading up to his death.

Richard Ragland was taken too soon.

Aged only twenty-two, and just mere days before his twenty-third birthday, Richard Ragland was embarking upon a road trip across Tennessee with a group of his friends.

The group made a detour on their way back.

And subsequently stopped at the Foster Falls State Park because, according to his Mom, Richard "wanted to get some pictures of the waterfall."

The park contains over ninety miles of hiking trails...

And Foster Falls, which is situated in the middle of the park, is a popular location for vacationers to enjoy an outdoor swim by its seventy-four-foot waterfall.

While swimming at the falls, Richard went under the water and never emerged again.

He drowned right there in the park.

Due to circumstances that still remain unknown, Richard, who was a National Guard soldier and a confident swimmer, became fully submerged in the water and was unable to resurface.

Apparently, his friends tried to bring him back to the surface...

But, heartbreakingly, none of them were able to recover his body in time.

Richard was filming with his GoPro that day...

But his camera went under the water with him and was subsequently left at the bottom of the lake, seemingly never to be recovered again.

And his parents were left questioning the circumstances surrounding their son's death.

Speaking to WSB TV, his father, Gary, questioned what actually happened that prevented Richard from resurfacing, and revealed that the family had hoped to answer them by seeing videos he’d taken with his GoPro camera. "He was a good swimmer. So what happened? What got him to that point where he couldn't get himself out of the water?"

Park Rangers apparently recovered the thumb drive from the GoPro...

And the thumb drive, which contained footage of Ragland having fun with his friends, was posted to the family, but, unfortunately, the envelope was empty upon arrival at the family's home, prompting them to believe that someone stole the video.

And for 2 years, his parents' questions have been left unanswered.

Without the footage of their son's final few hours, the family has been left with only their imaginations as to what could have happened to Richard. “We miss him dearly with all of our hearts," his mom, Robin, explained.

Aloha is a keen free-diver.

And he dedicates his YouTube channel to "treasure hunting" along lake beds and other untouched bodies of water.

And last week, he made a miraculous discovery.

Rich somehow spotted the GoPro, which had become molded into the mud. “I strongly believe that God led me to this GoPro because the only thing I saw was the end tip of the thumbscrew and everything else was just covered in muck," he said.

Unbelievably, the GoPro was still intact.

Though the exterior of the camera was visibly damaged, Rich discovered that the SD card was still inside the camera and was indeed working as normal.

He had been told about Richard's tragic death before his dive...

So when he uncovered and watched the footage from his find, it all started to make sense. Describing the moment as an "out of body experience," Aloha explained: “I was going through the footage and I said, ‘Oh my God, this is the guy.'"

Rich then set it upon himself to get the GoPro back to Richard's family.

He began to research how he could find Ragland’s parents and, after several Google searches and hours of online research, he found a phone number and called.

And he was able to return the footage to its rightful owners.

Rather than posting about his find on his YouTube channel - which is actually dedicated to his free dives - Rich took it upon himself to return the footage to Robin and Gary, instead. "I'm glad I found it, personally, because I try to do the right thing and get the item back to the rightful owner."

Richard's family are finally able to watch his final moments.

“For him to go through his efforts to do his research, make numerous phone calls, he didn’t give up until he got in touch with us and that means the world to us," Robin said about Aloha's efforts.

Writing in a Facebook post, they declared that Aloha is now considered as a part of their family.

And, heartbreakingly, they addressed their son in the post, writing: "Yes, we got it Rich! We got your GoPro young man! Another amazing young man name Rich Aloha found your GoPro at Foster Falls... You know that you are my joy, my why, my amazing son that made me so very proud and I will forever hold you close. I am enjoying this blessing from God and Rich Aloha and we are so very thankful."

The video footage shows Richard having fun with his friends.

“What we’ve seen so far is Rich being Rich, living life to the fullest," Robin recalled of the footage, which captured his final few hours.

Though some of the footage is haunting to watch.

In the video, Richard is seen splashing around in the lake, and happily laughing with his friends, obviously unaware of what is about to happen.

He appears to be in high spirits.

He is heard saying to the camera, "this is what life is all about. Being here with brothers and sisters. We living life."

Richard is heard commenting on how cold the water is.

And he says, while laughing and shivering, "all 3 of us brothers, all jokes aside, we've made a decision to live a lifestyle that most people don't like. Look at this!" He then pans the camera around the lake, clearly in awe of how beautiful the location is.

Though his final moments aren't captured, the video is still disturbing and somewhat eerie to watch all the same.

We can only hope that Richard's family have finally got the closure that they deserve.

His family haven't been able to bring themselves to watch the full video, but they have watched snippets, and say that they are simply grateful for the opportunity to see their son enjoying his final hours.