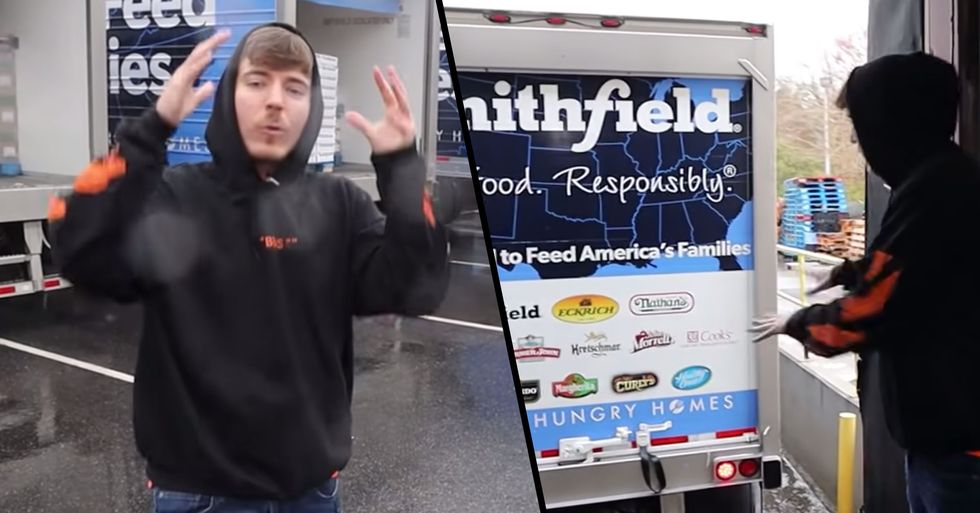 Millions of people around the world have been left relying on food banks thanks to the pandemic.

However, these organizations are fully stretched to their limits and times are beyond tough for many.

But thanks to the kindness of many, generous donations have been made to food banks all around the world, and Youtuber, Mr. Beast, is one of those people.

With the deadly virus sweeping the planet, millions have descended into mass hysteria - and have been frantically stocking up on basics such as toilet paper and dried pasta as a result.

Many unfortunate people are now having to rely on food banks to get their day-to-day groceries...

And this is truly a frightening time for the disadvantaged.

We cannot imagine not being able to buy our groceries...

And the worst part is that the food banks that so many now rely on are stretched to their limits and they are struggling.

Many food banks have found it harder than ever to encourage donations from the public...

And because there are so many people out there stockpiling, the donations have taken a rapid drop in the last few weeks.

But thanks to a select few...

There have been some incredible donations made, and one of these people is Mr. Beast.

Mr. Beast, whose real name is Jimmy Donaldson, is a well-known YouTuber...

And he's pretty successful going by his 33.6 million subscribers.

The YouTuber posted a video to his channel last week...

And it showed him donating an incredible £1 million worth of food to food banks in different areas around the country such as North Carolina.

He broke down the extent of the situation to his followers...

Speaking at the start of his video, he said, "Due to recent events, lots of people have started to hoard food, and when you hoard food, you donate less."

Mr. Beast decided to donate a lot of food to help the food banks cope under the current pressure.

He filled 6 Smithfields trucks to the brim of food, including bacon, sausages, canned goods, and dried foods such as cereals and pasta.

To put that into perspective...

That's the equivalent of 1 million meals.

The video follows Mr. Beast's journey in delivering all of the food to each location...

He is seen talking with the Smithfield program manager Jonathan and urging viewers to donate and encourage more donations as part of Feeding America's COVID-19 Response Fund.

And we want to thank the YouTuber for changing so many lives with his generous donation. Make sure to keep scrolling to learn about the dog who has been delivering his neighbor's groceries during lockdown...