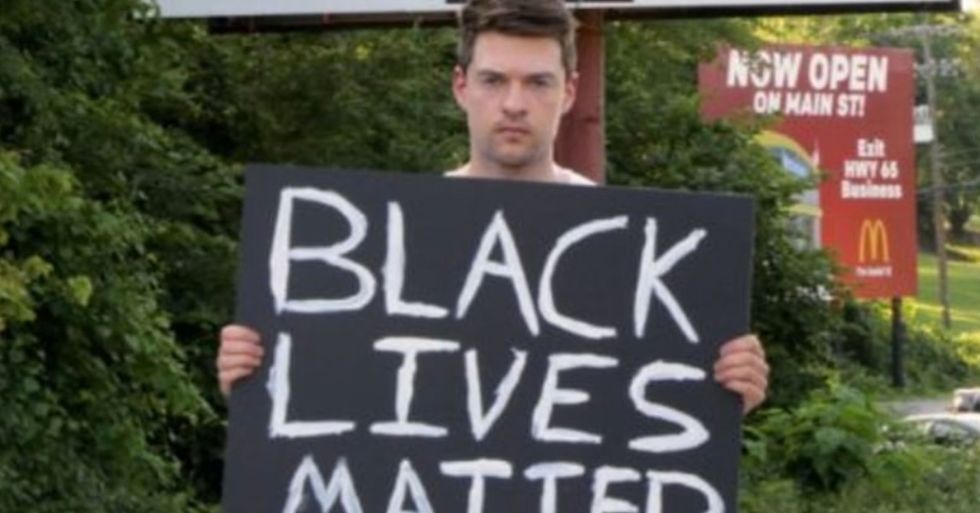 As the Black Lives Matter protests continue, one YouTuber had a very innovative way of expressing himself ...

This footage is well and truly shocking.

The Black Lives Matter movement has never before been so prominent.

But George Floyd's death has sparked an outrage like never before.

Hundreds of thousands of people have been taking to the streets in the United Kingdom, Germany, Spain, Canada, Australia, and New Zealand. The global solidarity has been incredible to see.

Black Lives Matter murals have been popping up across the globe.

And now, reports say that New York City has decided to paint their own.

The huge mural is said to be being painted on the lucrative Fifth Avenue.

But, while work is being done on the painting, Millionaire's Row, where Donald Trump's eponymous building is situated, was closed off to traffic.

The closure happened between 56th and 57th Street at 7 am on Thursday.

A Department of Transportation spokesperson told PIX 11 that the block would be blocked to cars until Sunday, when traffic would be free to drive through the painting.

Buses will be back operating sooner than that, however.

City officials postponed the work last Wednesday until this week citing "logistics" after NYC Mayor Bill de Blasio said it would happen "in a matter of days," as per The Sun.

The President slammed plans for an "antagonizing" BLM mural outside Trump Tower on Wednesday.

His Twitter rant came after the Mayor's intention to defund the NYPD's $6 billion budget was announced. "And yet the @NYCMayor is going to paint a big, expensive, yellow Black Lives Matter sign on Fifth Avenue, denigrating this luxury Avenue," the President said. "This will further antagonize New York’s Finest, who LOVE New York & vividly remember the horrible BLM chant, 'Pigs In A Blanket, Fry ‘Em Like Bacon.'"

De Blasio clapped back to the President a few hours later.

The major pointed out Trump's so-called "luxury" came from Black community's labor, for which they "have never been justly compensated."

"Only in your mind could an affirmation of people’s value be a scary thing."

Several people loved the fact that the mural would be located near Trump Tower.

And now one YouTube has created a protest symbol of a different kind.

YouTuber, Rob Bliss took to the streets of Harrison, Arkansas.

He called it the most racist town in America.

And watching his video, we might have to agree.

He held up his "Black Lives Matter" sign and watched the hate roll in.

Some of the responses were just horrific.

There was no positive reception here.

And the video really makes a case for the continuation of the Black Lives Matter movement.

Watch it here for yourself.

But be prepared - it makes for very uncomfortable viewing ... Want more from the Black Lives Matter movement? Scroll on for the stories of racist statues being toppled around the world.