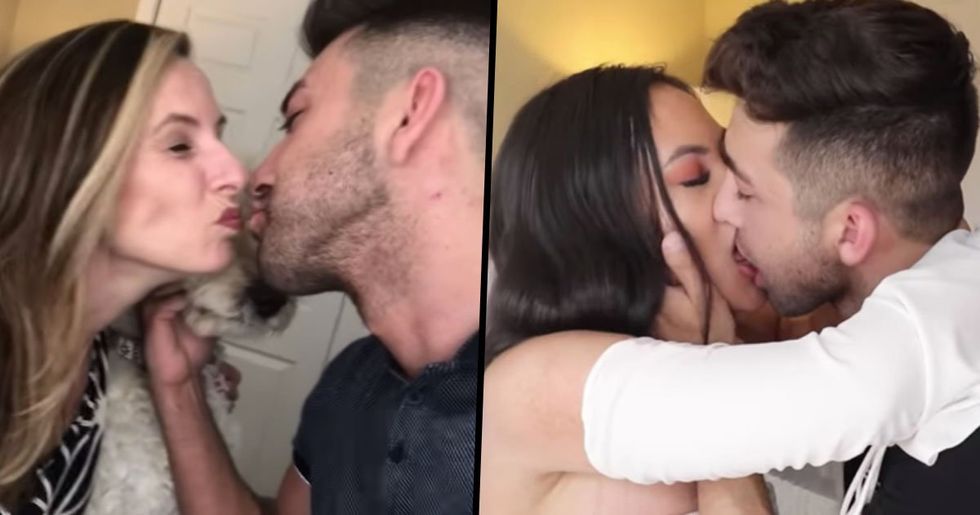 There's nothing that a YouTuber wouldn't do for a little time in the spotlight. PrankInvasion has just proved it. Twice.

2 months ago, Chris Monroe, the man behind said channel, posted a video of himself kissing his sister. Even though people were either grossed out by it or called it fake, the video has received millions of views and thousands of thumbs-up.

Since it became a hit and got lots of media attention, Chris decided to make another one. This time he kissed his mother. It was even worse. He bragged about the first video making it big on YouTube, then sneaked up on her to "pop the question."

But at the end of the day, after all the theories about the legitimacy and wrongness of the two videos have been shared, one question was still left that no one could figure out the answer to.

Are you ready for the most cringey thing you'll ever see? Keep scrolling.

The world has proved to us time and time again how far we'll go for one scandalous headline.

YouTuber-prankster, PrankInvasion, is the perfect example. 2 months ago he shook 3.8 million of his viewers when he uploaded a video of himself kissing his half-sister.

With tongue and everything.

But it didn't go unnoticed. People shamed him for being incestuous and just being plain gross.

The video is titled "KISSING MY ACTUAL SISTER PRANK."

It got everyone confused. Some viewers didn't believe that Kaitlyn O'Connor is really his sister.

He almost surely did it for the views.

First, he hovered outside her room like a total creep. Then they sat down and went ahead with the video.

It's truly hard to watch.

But LadBible's Daisy Phillipson points out that something about it doesn't quite add up...

The video seems to be staged. All of his videos are.

A lot of people also suggest that Kaitlyn isn't his sister, but actually a cousin. Still gross.

But her final point is even worse.

Phillipson believes that the two must have done it before because they got real intimate, real fast.

"Did you see how the pair of them were going for it?" she writes.

"Surely, surely, no two people who are related could get this intimate with each other and still have a smile on their faces afterwards." Unless, maybe, they want fame more than anything else.

But whether the video is real or not, the sight is so cringey.

Just thinking that they might be blood relatives, filming themselves as they "french it up," is enough to activate our gag reflexes.

"This made me soo unclean that I feel Iike bleaching my eyeballs and scrub my entire body with a Brillo pad," someone wrote.

Daud Qamran felt that Thanos died too quickly in Avengers: Endgame: "We need Thanos - some people are still left."

Meg Murder: "I mean, why would you do this in the first place, but also, why did they keep going back for more?!"

But as grossed out as people were, nearly 7.5 million of them have seen it (that’s assuming that no one has watched it twice – that would be gross).

But you can see for yourself - if you dare:

Drenemina added to Meg Murder's point, writing; "'I don't want to do this.' "Kisses for a full min. "Does it 3 times."

But despite all of the negative comments, Chris came back 2 months later with a new video.

This time he's kissing his mother. PrankInvasion really misunderstood what "show your mother how much you love her" implies...

He started the video with bragging about the attention his and Kaitlyn's little stunt had attracted.

Then he added, "This video, we're gonna top my kissing my sister prank video. I'm gonna kiss my mom. It feels so weird to say that but it's going down."

The video has reached a new level of wrong.

Kissing the woman who has carried him inside of her for 9 months, and cared for him through childhood, is incredibly weird. He even admitted that he was feeling weird about it, but went with it anyway.

Apparently, he kept a "collection" of the articles that were written about the first video...

It got worse when he shared that this new video was rushed because he (or "we," according to Chris) couldn't wait a couple of weeks longer.

He said, "Only thing is, I was planning to shoot this video later this week it turned out my mom has an emergency, she's gotta leave the country."

Because of it, he also didn't have time to charge his regular, good quality camera, and so had to shoot the video with an iPhone.

We're kind of glad of the low-quality...

He continued, "It's either I shoot now on the iPhone or I wait 2 weeks - and we don't wanna wait 2 weeks."

Then he proceeded to sneak up on his mom several times, trying to find a moment when she's not too busy to "pop the question."

He said his mom gets mad when he interrupts her.

But no matter how hard he tried to find the perfect timing for the smooch, she still got a little mad. We wonder why...

She wasn't too excited about his proposal.

He said, "Mom, the video with Kaitlyn went crazy, it went viral and I just I need, I need you to do the quick game with the kiss for me."

His mom shouted in response, "No Christopher, I don't wanna do that!"

To that, he responded with a simple, "It'll go so viral." Eventually, he did convince her to participate.

They played "rock, paper, scissors" to decide who will have to initiate the kiss.

The first time they played, the mom won, meaning that she would have to kiss her son (ew).

This time, Chris won as he had "rock" against her "scissors." He would initiate the kiss.

He let out, "Oooh, I won that time" - a little too enthusiastically, we'd say.

Does the fact that someone actually sponsored the video make the whole thing better or worse?

They went ahead with the kiss.

Luckily for our eyes and stomachs, it wasn’t a full makeout session like the one he'd had with Kaitlyn.

But the viewers weren't any less grossed out.

Oger Edmon wrote, "When u watch all seasons of Game of Thrones in one week..." Joshxbox18: "He pecks his mom but makes out with his sister. Sicko."

Rithik 1234 was concerned for the dog who kept reappearing in the background: "Somebody save the dog. I think he's next."

Shantanu Shetty: "Someone: You kiss your mother with that mouth? "PrankInvasion: YES."

See the video below:

After witnessing all of this, and getting our heads around the fact that Chris is slightly insane, there’s one thing left we still can't figure out: How is this a prank, and who are you pranking, Chris?