They managed to get the interior door knob up to a sweltering 1,400 degrees Fahrenheit. | 22 Words 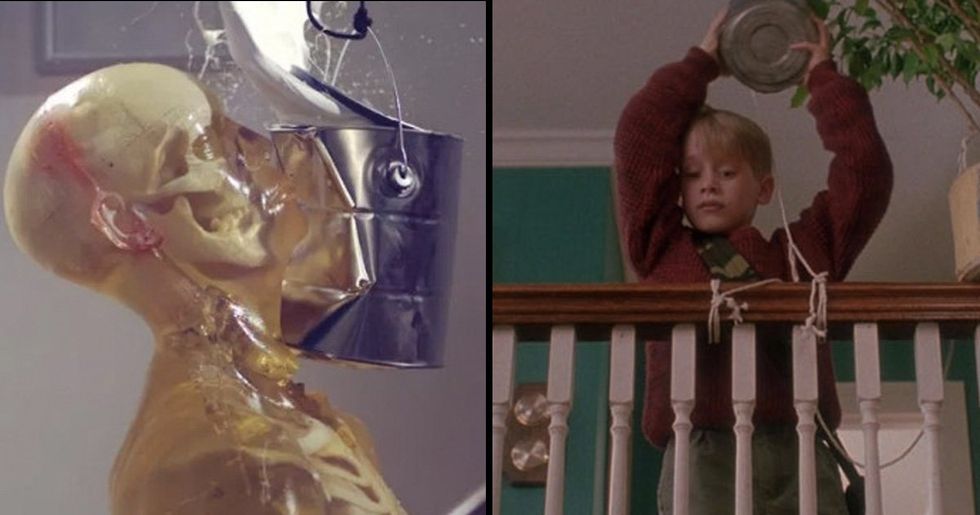 While the holidays can sometimes bring along insane stress with gift shopping, travel, and family members, there is a beacon of light during the holiday season: Christmas movies. No matter how overwhelmed you become, there's nothing lovelier than cozying up on the couch with a blanket, a warm cup of hot chocolate and a holiday favorite.

There are so many classic Christmas movies– whether you're a diehard Die Hard fan or more of a Love Actually fan, there's something for everyone. We all have our different tastes, but I bet it's safe to say that most of us grew up watching Home Alone every Christmas. Even if you haven't seen it in ages, whenever somebody yells, "KEVIN!" or says, "Buzz, your girlfriend," you know they're quoting the iconic holiday film. The film is a family favorite for the holidays.

It's one of the best Christmas movies ever.

It's full of memorable lines and characters. We all know it so well.

In the movie, as we all know, Kevin sets up a bunch of traps to keep two con-men from robbing his house.

Joe Pesci and Daniel Stern are hilarious as the pair of robbers, dubbed the "Wet Bandits."

It's up to Kevin to protect his home!

This scene still makes my skin crawl. Can you imagine having to act in it? No, thank you.

Kevin gets a little crazy with his traps.

And because it's a movie, we don't bat an eye at how "realistic" these traps are. Or what damage they could do in real life.

Have you ever wondered what the traps would do to a person in reality?

If so, you aren't the first person to wonder this.

The Vsauce3 team decided to recreate the traps in Home Alone. The results? Let's just say they were...

A human would suffer serious injuries from the traps Kevin McCallister set in his house.

Hosted by Vsauce3 member Jake Roper, the team's video tests the traps on a dummy.

They decided to test two of the traps that Kevin sets in the movie. Thank goodness they tested the traps on a dummy and not a real person.

The first trap they decide to test is the red-hot door handle.

Kevin gets this door handle so hot that it's glowing red. He's an 8-year-old scientific genius.

Jake points out that in the film, Kevin uses an electric barbecue lighter to heat up the handle.

Kevin puts the lighter on the interior knob, and it gets so hot that the exterior knob is heated as well.

So by heating the interior knob, the exterior gets hot enough to burn the hand of any conman.

But wouldn't the door get hot too and potentially burst into flames?

There's only one way to find out.

To test it! The team and Jake made the lighter nice and hot and hung it on the interior door knob.

But at that point, the exterior door knob only reached about 65 degrees Fahrenheit.

In order to speed it up, Jake took a torch to the interior door knob.

And yet still, the exterior door knob wasn't getting hot enough. How did Kevin do it?!

They managed to get the interior door knob up to a sweltering 1,400 degrees Fahrenheit.

But the exterior door knob was only reaching around 115 degrees. Of course, this wouldn't be fun to touch, but it's not quite glowing red.

To test the hotter of the two handles, they used a slab of meat instead of a human hand.

They used pork belly, which has a similar thickness to a hand. They held the meat on the door handle for 3 seconds, like in the movie.

The result was pretty intense.

And pretty similar to what happens in the film. However, in the movie, no damage is done to the door.

But in Jake's experiment, the interior of the door lit on fire.

Which, as Jake points out, would defeat the entire purpose because the conmen could stroll right in. Oh, Kevin. He should've really thought this through.

Next up is the "paint can to the face" trap.

This is one of the most famous traps in the movie. Also, it is my nightmare.

First, they break the paint can trap down.

The Vsauce3 team explained that a standard paint can weigh about 13 pounds. At the speed in which Kevin drops the paint can from the top of the stairs, it's traveling around 20 mph. That sounds painful, to say the least.

Getting knocked by one of these paint cans is the equivalent of getting punched in the face by Mike Tyson, twice.

As they point out in the video, the force is six times stronger than what it takes to break your nose.

You would absolutely be knocked out, and there's a 42 percent change your skull would crack.

Kevin is a murderer. Why doesn't anyone ever talk about how sadistic this child is?!

The team tested the paint can trap on a dummy.

I could watch this video over and over. Why is it so satisfying?

But knowing that in the movie this is supposed to be happening to an actual human...

It's terrifying. Again, Kevin is one sadistic little kid.

Look how far back the neck goes!

You would absolutely be dead.

As an added bonus, the team decided to test the "crowbar to the chest" part of the movie.

In the movie, one of the bandits takes a crowbar to the chest of the other bandit, in order to kill the 8-legged spider.

But what would happen if you actually hit someone with a crowbar in their chest?

Traveling at approximately 35 mph and weighing around 5 pounds, the crowbar will hit the chest at about 4.5 times the amount of force it takes to break a human rib.

In their test, the crowbar broke through the skin, seven ribs and punctured the lungs and heart.

So, could you survive the 'Home Alone' traps?

Technically, you could. BUT AT WHAT COST? You'd have broken ribs, a punctured lung, a punctured heart, a burnt hand, a cracked skull and most definitely a broken nose.

The entire video from the Vsauce3 team is super interesting to watch.

Share this with a friend who is obsessed with Home Alone!