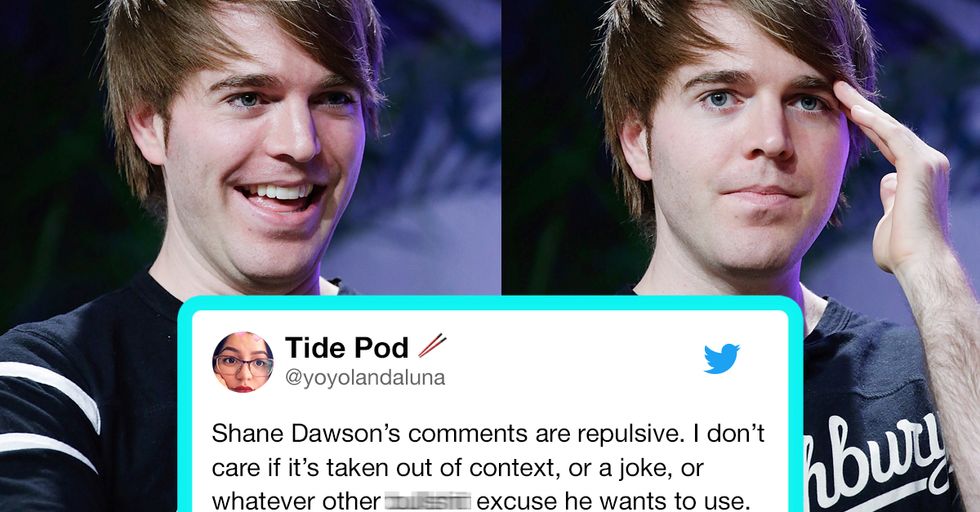 Well, here's a story for you.

Popular YouTuber Shane Dawson, real name Shane Lee Daw, became the subject of pedophilia rumors this week when a video from the now-deleted Pop Blast YouTube channel purported to show him confessing to being a pedophile.

Dawson, who is considered Youtube royalty for his comedic youtube channels which have 20 million followers and over 4 billion views, was once known for making provocative (read: racially and sexually offensive) videos and remarks.
The video in question, however, stems from a 2013 episode of his podcast, Shane and Friends, during which he makes light of pedophilia. In it, he describes an interaction with a six-year-old fan saying, "And she shows me her Instagrams which are like — first of all — I don't know if I'm allowed to say this but, like, she's, like, sexy."
When his horrified co-host decries his remarks, Dawson plows on, offering his “justification for pedophilia." “First of all, let me just say, having sex with children, or touching children, or anything of that nature is terrible, and you should not do it," Dawson states.
But then he goes on to say,

Here's my thing: People have foot fetishes. People have fetishes about, you know, everything. And there's websites on the internet where they can look at that weird creepy s--t and jerk off to it. Okay, fine, everybody do your thing.

Also, the channel that “exposed” me also has videos on their channel like this. proving even more so how hypocritic… https://t.co/xHbbnCrEVj
— Shane Dawson (@Shane Dawson)1515631048.0

And then he continues by pondering why anyone would be arrested for Googling a naked baby. "First of all, I don't understand why anybody would be turned on by that. But it was sexy." He then quickly reaffirms he's kidding.

People on social media were not amused, especially when the Daily Pop's heavily edited version of the podcast was circulated across social media Wednesday.

Okay now Shane Dawson is apparently a pedophile..WHEN WILL THE YOUTUBE DRAMA END

I’m not going to talk about it cause..idk but since there is literal proof I don’t know how I feel about Shane right now I’m might wait until he says something about it — Olivia | 193 (@SoftestHowlter) January 10, 2018

i just found out that shane dawson is a fucking pedophile

so shane dawson is a pedophile,,,, time to unsub ?

Oh lawd now Shane Dawson is under heat for calling a child sexy and is being called a pedophile.

Shane Dawson is now being accused of being a pedophile because of clips taking him out of context where he tries to make his podcast cohost uncomfortable on purpose with jokes. Lmao I hate people, y'all its not that deep. pic.twitter.com/6fvnfjvPUS

Faced with a barrage of tweets calling him a pedophile, an angered Dawson took to YouTube to set the record straight.

Dawson then explained what spurred his comments.

Dawson also spoke about being molested as a child, which is why the accusations came as an extra blow to him.

So I think that's why it hurts the most is having my name put next to the word pedophile is actually the most triggering and the most heartbreaking thing I've literally ever seen. I am so sorry if that triggered you or offended you or hurt your feelings. It triggers me listening to that clip. Listening to that f--ks me up.

i genuinely think someone was trying to make a conspiracy theory about me in real time. uploading clues, hints, etc… https://t.co/OBshx92YyC
— Shane Dawson (@Shane Dawson)1515639320.0

If there's one thing to take away, it's this – don't be a sh*tty person on the internet because it will literally come back to bite you. Dawson, in his earlier years, spewed the most offensive things imaginable, and while he's changed his schtick, the internet is forever, and it's always waiting.