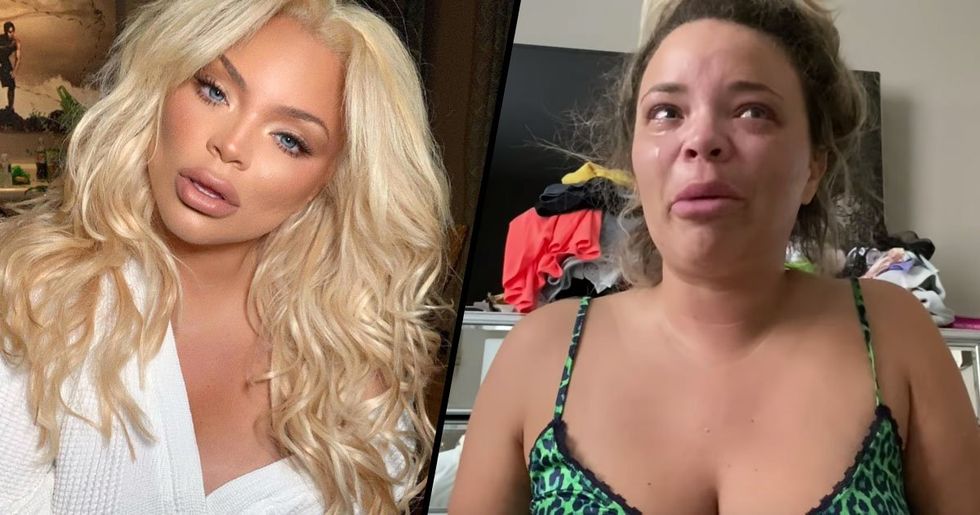 Society is slowly becoming more open to ideas that would otherwise be rejected, if we hadn't progressed to where we are today. However, some argue, rather than moving towards the ultimate goal of a more inclusive society, we're actually heading towards a warped version of this.

Some people are claiming they want to identify as animals, mythical beings. Where do we draw the line? I'll tell you where. At Trisha Paytas.

It's people like this YouTuber that attempt to give the LGBTQ+ Community a bad name with their actions.

Keep scrolling to read exactly what Paytas had to say on the issue.

For all of you that don't know, this is Trisha Paytas.

She's a popular YouTuber that produces a range of different content for her audience from mukbangs (eating videos) all the way to lifestyle advice.

With over 4 million subscribers, it's safe to say that she is well established.

Most of her videos have hit the million view mark, and the star has also had her little spotlight in the music industry when she released a range of music videos including, "Thick."

Though her videos are typically fun, she is also known for clickbait.

The term "clickbait" refers to lines that may be misleading, used to lure audiences in. The YouTuber has been ridiculed for her "clickbait" headlines.

One of her videos was titled: "I'm dating a ghost (for real)."

Still to this day, no one knows what this video is about. Right from the start, I was confused. And by the end, I found myself questioning my sanity.

But that's just Trisha Paytas for you.

She gets paid to be crazy, unique, whatever else you want to call it.

However, this time, people are saying she took things too far.

It all started with a video that she uploaded onto her channel named "I am transgender (female to male)." Knowing who Trisha is and what she gets paid for, the title already seemed a bit problematic, but things only got worse looking at the video thumbnail.

The thumbnail shows her in her normal attire...

She then compares it on the other side of the screen with her "Zac Efron" costume. The operative word here is "costume." So, are we supposed to take this video seriously?

Throughout this fifteen-minute video, she talked a lot about her gender and what she wanted to identify as.

This is what Trisha had to say: "I don’t like labels. For me, saying I’m transgender was just a thing to say because it’s what people want to label me as - a female, who’s a male."

"I’ve always wanted a p****. I always have because it just makes dating easier. I’ve dated gay men and this is what offended people in my video is when I date gay men, a lot of gay men think I’m not man enough because I don’t have a p****."

Her audience didn't know what she meant...

Is her sexual preference a man who doesn't like the female body but still wants to be with a female? Or men that are attracted to people that identify out of their gender but have not yet transitioned? Everyone was very confused.

A member of the LGBTQ community spoke out against the star:

Drag queen, Vicky Vox had this to say: "Using gender identity as clickbait is a privileged act of violence." “I’m not gonna stand for it. I don’t care what it’s actually about. The headline and photo used cannot be serious. Trans people are murdered for quietly trying to live their life. Big NOPE."

However, when she appeared on The Doctors, two hosts defended her.

One of the guys said: "I actually believe you are a transgender person," he told her. "The fact that your assigned sex at birth was female, but in your brain, you feel male, that, to me, meets the classification for a transgender person. It's not so much if you ever have surgery. It's about the way you feel."

The social media star broke down crying because she felt like no one else accepted her.

She said: "I wasn’t going to cry. You’re just the first person out of LGBTQ that I don’t know on a personal level, that’s accepted me. It means a lot because so many people think I’m faking this and it’s just so hard."

Many people continued attacking Paytas because of her video.

I mean, if you suddenly break out with the line "I identify more as a gay man because I like guys but I also identify as a guy but I don't plan on transitioning even though I hate my body," people are going to be angry, confused and shocked.

The next day, she went onto defend her actions in a separate video.

"I’m overwhelmed by the amount of backlash. This is something that I have just felt since I was five, six, seven."

She then went onto outline some stereotypical things about growing up as a female.

Trisha isn't one to stay away from the spotlight...

So no wonder people are calling her out for her bold claims. To be honest, if this is truly how she feels, I'm sure the community would be happy to welcome her. But if it was just a stunt that she feels like she can't get out of now, then she is giving the entire inclusive movement a bad name. That's not good enough.

Her previous scandal involved the drama with her ex-boyfriend Jason Nash.

They both had a full-on meltdown on YouTube after they had announced their break-up. It was all very messy.

What do you think? Is this real, or an act that has just gone too far to turn back now?