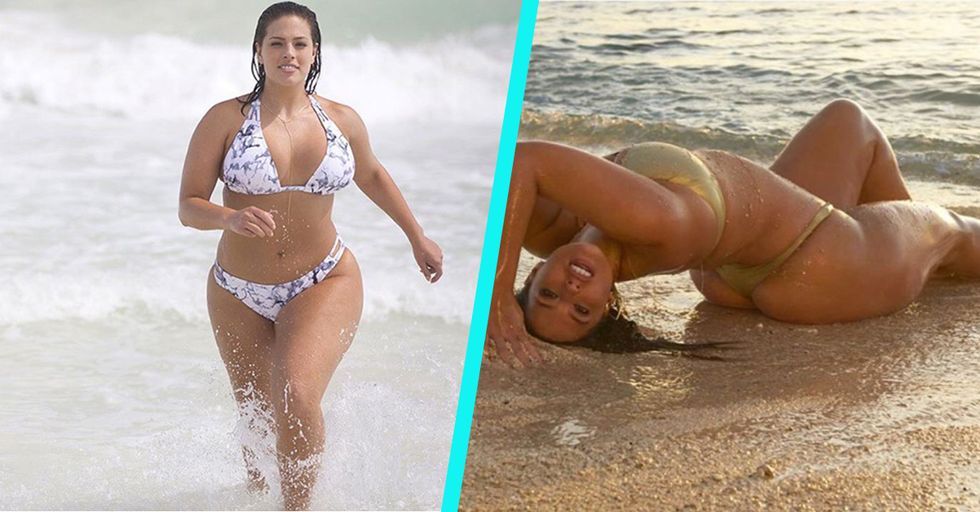 We're Obsessed with Ashley Graham, the Confident, Sizzling Hot Plus Size Model You Haven't Heard of Yet

While she's already shattered tons of glass ceilings...becoming Sports Illustrated's first plus-sized cover model, judging on America's Next Top Model, and so on...yesterday, she posted one simple Instagram that has the world buzzing like crazy...

Model, designer, and empowering body activist, Ashley Graham, is no stranger to the spotlight.

After gracing Sports Illustrated's cover as the publication's first plus-sized model back in 2016, Ashley's star has been soaring sky high.

No matter how famous she gets, though, Ashley never seems to sever ties with her inner activist.

Ok. I will. She's become the poster girl for an entire generation of people looking to embrace positivity.

Her Instagram feed has a little bit of everything for her followers.

Inspiration, as you can see here.

She's also doling out a whole lot of curves along with her body positivity.

She's done a lot for her career and other people, all while seemingly having a great time. A recent picture she took made all sorts of waves by not just focusing on the positive or glamorous. Supermodels have flaws, as you'll see.

Yesterday, whilst vacationing in the Philippines, Ashley took a moment away from relaxing to post this powerful photo on Instagram...and the Internet went bananas.

In her post, she writes, "I workout. I do my best to eat well. I love the skin I'm in. And I'm not ashamed of a few lumps, bumps or cellulite.. and you shouldn't be either. #beautybeyondsize #lovetheskinyourein"

While a select few have chosen to respond to Ashley's post with hate, an overwhelming majority of the comments are filled with love, love, love.

Folks everywhere are so on board with Ashley's message and mission, and I mean...how could you not be?

This queen is HAWT on the inside and out!

We are not worthy.

Since then, she hasn't let the haters or critics slow her down one bit.

She's living her best life. And has the pictures to prove it.

Whether it's exhibiting her flaws or speaking to her struggles, she's empowering people who might otherwise feel marginalized.

Does that make her a hero? To some, yes!

It would be haphazard to throw that designation around every person, but Ashley's making a big difference.

In fact, it's undoubtedly helped her career.

What's she up to next? Big things, no doubt.

So stay tuned and don't you dare write this one off!