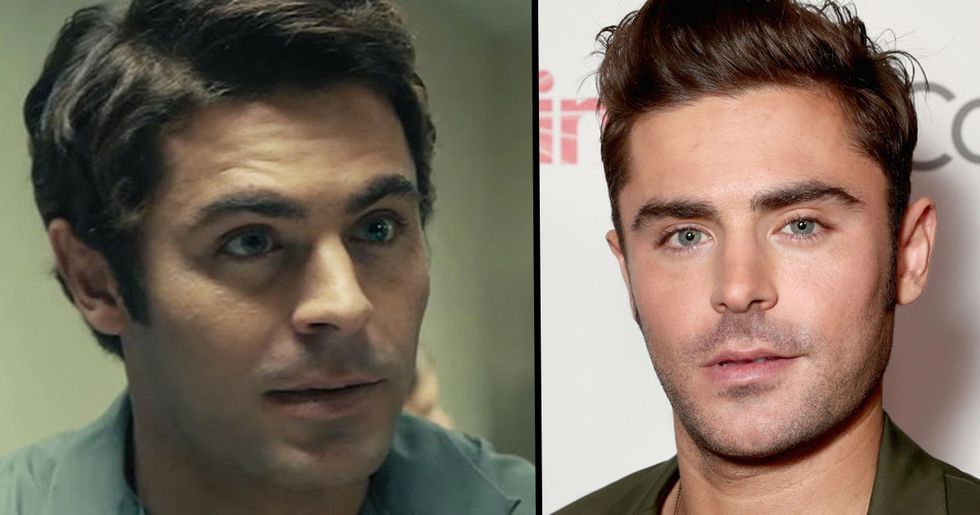 Now, looking for a permanent lodging in the peroxide palace, alongside the aforementioned, is all singing, all dancing, teen idol turned very serious actor, Zac Efron.

The cosmetic change comes in the wake of his new film Extremely Wicked, Shockingly Evil, and Vile, (in which Efron plays the necrophilic serial killer, Ted Bundy). The film's casting has come heavily under fire from critics since it premiered at Sundance in January, for hyper-sexualising a deranged murderer.

The idea of coloring one's hair actually goes back to the French courts of the 16th and 17th centuries, when characters like Marie Antionette (pictured above) would color their hair with powder.

The peroxide look was made synonymous with fame and glamour by Hollywood's finest, Marilyn Monroe, during the 1950s. She had started her career with brown hair.

David Bowie famously bleached his hair in the 1970's. A look that was also promoted by singer/songwriter Lou Reed on his Transformer tour.

In the 1990s the bleached look was donned by grunge royalty Kurt Cobain and Courtney Love, exploding the look.

Today famous people all over the public eye are reaching for the chemical, including Lady Gaga and Jared Leto.  Let's look at some more...

And megastar, Jesus-impersonator Kanye West quickly followed the example set by his wife.

Here's Katy Perry sporting a bleached crown - and dressed like a cyborg designed by Donald Trump.

Let's not forget everyone's favourite man-boy, all grown up.

Ms Cyrus has donned the look since her famous 'Wrecking Ball' video.

Chris Messina at the golden globes for his hit series, Sharp Objects.

Hollywood's own Ansel Elgort, reposing on a Polo shoot.

Turns out Daenerys sports the look outside the bounds of America's favorite dragon show.

Jennifer Lawrence, the most 'down to earth' actor in Hollywood, with her thick yellow mane.

Zac Efron at Sundance, dying his hair so as not to look like a serial killer in the wake of his new film Extremely Wicked, Shockingly Evil and Vile.

When asked whether Efron was promoting the film with his hair style, he answered 'It's just for life bro...'

The new film, directed by Joe Berlinger, explores the inner psyche of American-made serial killer, Ted Bundy, who was responsible for the murder of 30 young women and girls in the 1970s.

Ted Bundy is serial killer, born in Vermont who butchered and raped over thirty women during the 1970s. He also escaped police custody and went on the run, before he was sentenced to death in 1989.

The film has come under fire in the media for choosing to cast a 'sex icon' as the perverted, necrophile Bundy. The tone of the trailer has been criticised for making the whole narrative look like some sort of edgy heist movie with a lovable antihero.

The Problem with Bundy

The problem is, part of what made Bundy so iconic was that he originated the image of the charming, handsome psychopath. A monster with a mask. Bundy was the progenitor for such fictional creations as...

Protagonist of Bret Easton Ellis' classic book, American Psycho. Bateman was modeled heavily on Bundy and his ability to hide in plain sight as an American charismatic go-getter.

But, regardless of whether or not Bundy was attractive (seen above smouldering his mug shot), perhaps it's not moral to sexualize a monster in such a way?  Or perhaps it's a comment on America's fetishization of violence.

Lots of critics have become frustrated at the films approach to depicting Bundy, with a number of them speaking out as it premiered at Sundance.

Suzanne Moore wrote in a piece for the Guardian, 'I abhor this worshipping at the shrine of a mediocre rapist... Bundy is long gone, executed in 1989, and here he is again alive in our minds, immortal and sexualized. No longer ordinary...'

A.A.Dowd wrote for AV Club, 'Berlinger may think he’s taking the non-sensationalized approach by refusing to depict Bundy’s shocking murders. But by only showing us his public face, the tap-dancing charm that made him a media sensation... Extremely Wicked risks minimizing his evil.'

However the film was quite well received on the whole, receiving an 8.7 on IMDB, with many critics coming to its defence.

Who wrote in Variety, 'Extremely Wicked, Shockingly Evil and Vile is an honestly unsettling and authentic inquiry into the question of who Ted Bundy was...'

Who wrote for Little White Lies, 'It’s a theatrical, absorbing performance which works in part because of Efron’s own cultish celebrity, but also because he manages to convey something dark and sinister lurking beneath the polished surface.'

Make up your own mind.

You may argue that it's too much for a sex symbol to play someone so malign, or you may argue that it doesn't matter, or that it's a cunning play on the blood lust of the American middle class. Whatever you decide, probably best to just watch the movie. At least Efron seems to be enjoying himself.