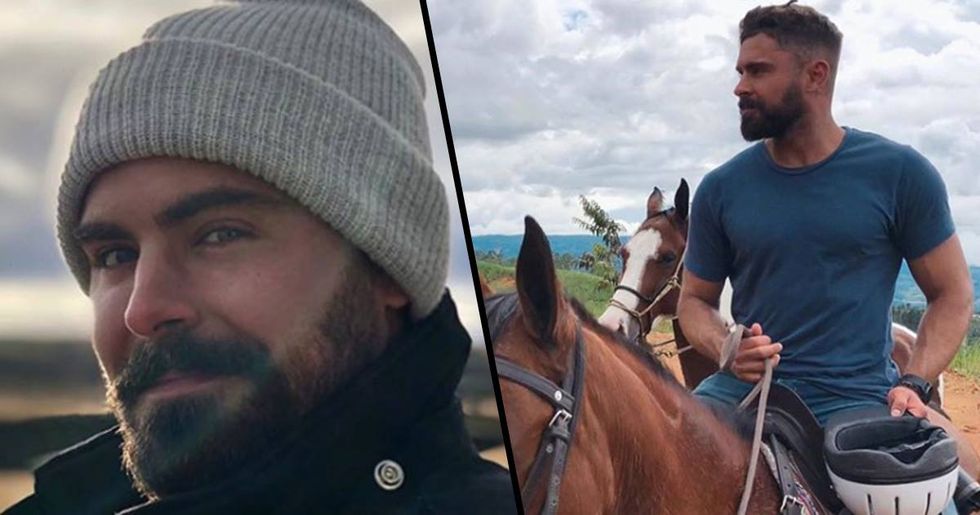 We all went through that period in life where we crushed on the heart-throb that is Zac Efron. If you didn't have a poster of the Wild Cat's team captain, Troy Bolton, on your bedroom wall: you're lying.

But since the last High School Musical film, which was released in 2008, (yes that's ten years ago, and yes we all feel old now) Zac has ditched the fringe and bulked up - in what we can only describe as the biggest glow up of the century.

And you thought you couldn't perfect perfection.

Zac showed off his new-found abs in 2014 when he played a fraternity-boy in the comedy, Bad Neighbours - who in their right mind would complain about being next door neighbours with Zac?

But what we're most grateful for this year, is Zac being captured riding a horse on Thanksgiving. And yes, everybody said the same thing.

A baby Zac captured on NBC New's Today back in 2010, after the success of the High School Musical franchise. Look how young he looks!

He'll always be known for HSM.

Let's face it, Zac Efron will always be the high-school basket player and singer who broke free from the school stereotypes.

We're just getting started with topless-pictures, so keep calm and don't get too excited. Not just yet anyway.

And this is him riding a horse on Thanksgiving.

Ugh! That smouldering look, those arms, and that beard. We have a lot to be grateful for this year, and it's all this picture.

And everybody said the same thing.

I mean, we were all thinking really. Some of us just dared to say it, and who can really blame them?

But we're only human. And it's not like we've booked a slot of horse riding lessons... Yet.

Other people's reactions are golden.

We're really not sure, but we're glad it happened. Because Zac has officially earned the 'daddy' title.

He really is a piece of art, where do we get one?. It's the first time a lot of us have felt jealous towards a horse.

Zac recently turned 31-years-old, which gives hope to the singletons out there ready to hit the big 30 - don't worry, your knight in shining armour is around the corner.

It's not the first time the actor's gone rodeo.

Zac was pictured riding a horse whilst topless back in 2014, and the internet was as grateful back then and they are now for the stunning image.

In fact, he seems to make horse riding a regular activity of his.

You've got to get around somehow. And we honestly don't mind if it's via a horse, without your top on, and neither does the internet.

Because Zac is perhaps one of the only men that could turn up to the Met Gala on a horse and pull it off.

It's not just the ladies that are swooning over him.

We have a feeling that a Brokeback Mountain 2 would be very successful. Who would play the other cowboy?

People are getting confused and thinking Zac is actually the Scottish actor and producer, Gerard James Butler. Maybe he could play the second cowboy?

Everybody is loving his new look.

He received over three million likes on Instagram within the first 16 hours of posting the picture.

No-shave November has to be the best month of the year; because a thick beard or moustache can turn a 4/10 to a high 8/10. Men: take note.

Who doesn't love a 'Novembeard'?

It's a little strange seeing Zac evolve from a bare-faced high-schooler to a 31-year-old daddy, but we fully support his decision to grow the 'Novembeard'.

So what is Zac doing now?

When the actor isn't shirtless on top of a horse, he's keeping pretty busy starring in films - he even featured in last year's The Greatest Showman.

Zac plays college boy Teddy in the comedy Bad Neighbours, which is perhaps the first time he revealed his toned body. His bromance with Dave Franco's character, Pete, is also pretty hilarious.

And showed off another great asset.

In case you need any more persuading to go and watch the film. Here is something that will definitely encourage you.

And he makes a great lifeguard.

Zac acted alongside Dwayne Johnson, aka The Rock, in the 2017 film Baywatch - and boy do they both know how to pull off a pair of red shorts.

Are we the only ones who can't swim and have the sudden urge to jump into the ocean? No? Thought as much.

No, this is not actually Zac Efron: it's his wax figure from Hollywood's Madame Tussauds. But if you can't have the real thing, this should do.

But he actually is unreal.

Even when he's holding a baby goat he's marriage material. Which is something we never thought we'd end up saying.

He's mastered the acting world and is now spreading wings - Zac presented the 2018 Golden Globes on their 75th anniversary.

And he looks good with clothes on too.

He sure knows how to scrub up well. Once you see Zac in a black suit, you'll never really forget about it.

Get you a man who can pull off a suit and a pair of red swim shorts, because Zac certainly can.

But he's still a child at heart.

This is Zac... fighting with a panda (?) at this year's FOX's Teen Choice Awards. And although we don't know exactly what's going on, we kinda live for it.

And to us, he'll always be Troy Bolton.

No matter how extensive his IMBD list gets - Zac will always be the coach's son, the love of Gabriella's life, and the singer of 'Get Your Head In The Game'. Sorry Troy, I mean... Zac.

Although some kids are growing up without High School Musical.

Which is pretty heartbreaking, and makes us feel extremely old. Did we mention that the first HSM film came out in 2006? Scary.