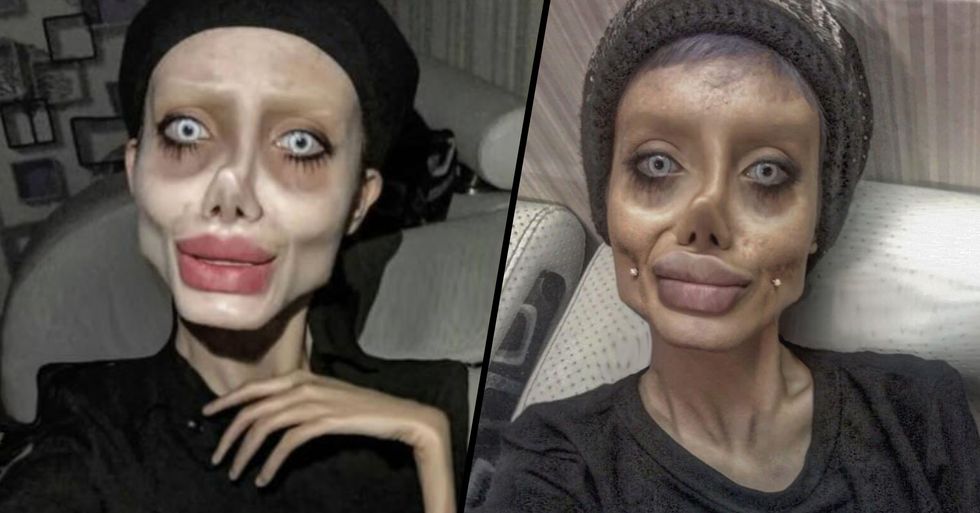 Remember that influencer who went viral for an appearance likened to that of Angelina Jolie and the Corpse Bride, all rolled into one? Well, it seems she has had some scary news about her health.

Keep scrolling to find out how she landed herself in prison in the first place, and the status of her health now.

The pictures are truly shocking...

With people debating what inspired Sahar Tabar's look, the Instagrammer collected a variety of fans, mythologizing who she is and what she stands for.

The murder of the Iranian blogger resulted in a public outcry and human rights organizations across the world spoke out. The government was forced to lead an investigation. The public demanded that the Chief of FATA, Seyyed Kamal Hadianfar was replaced, but after much agro, nothing changed. FATA continued its online censorship and nothing could be done.

Hojabri's face was apparently obscured, but it was clear that she was tearful as she expressed her deep regret for posting the "inappropriate" dance videos to Instagram. The Instagrammer, who had over sixty-thousands followers before her arrest, has now completely disappeared. She has totally vanished from the public eye and her whereabouts remain unknown. The parading of the young woman on television caused outrage but this did nothing to prevent the government from furthering its surveillance on social media.

As of July 2018, the Iranian judiciary has been in talks concerning the filtering of Instagram.

Tabar was recently brought on TV, without makeup or prosthetics.

The clip shows how different the star looks compared with her shocking Instagram posts.

It was the first time she had spoken out.

She featured on the Iranian regime-run channel, IRTV2.

In the interview, she explained that she didn't alter her face to look like Angelina Jolie, to whom she is often compared to.

“I do not currently look like my photoshopped pictures. My mother was telling me to stop, but I didn’t listen. Sometimes the words of a stranger or a friend can be more important than those of a parent."

The Iranian broadcaster used the star to show how wanting social media fame can ruin lives.

“Vulgarity on social media gets a lot of clicks," Tabar added.

Sahar is still in prison, however.

Amid the pandemic, her lawyers had asked for her to be released amid the outbreak.

However, she was refused bail.

Now, she is said to be seriously ill with the virus, and on a ventilator in Iran.