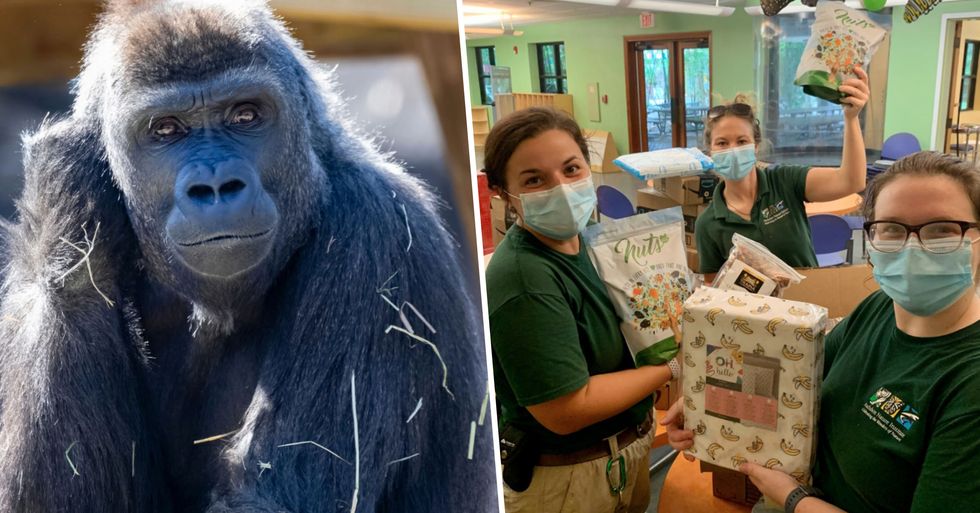 Gorillas are one of the many species targeted by poachers in the wild, making them vulnerable and at risk of extinction.

This is why one zoo has pulled out all the stops to make their pregnant gorilla feel extra special during this exciting time...

Baby showers are all the rage at the moment.

And although they might be commonplace to us, you wouldn't typically think this applies to primates too. Well, one zoo is about to change your mind forever...

It is common knowledge that we humans evolved from monkeys millions of years ago...

And we continue to hold a great relationship with our primate cousins - who, by the way, we share ninety-nine percent of their DNA with.

Monkeys have become popular targets for hunting and animal testing over the decades.

Many species of primates are on a steady decline...

And it is utterly devastating to see these beautiful and intelligent creatures slowly die off.

And perhaps one of the most affected?

The first being deforestation to their natural habitat - destroying their homes.

Deforestation leads to an even more heartbreaking scenario.

Cutting down their natural habitat clears the way for people who hunt gorillas for bushmeat.

Rise in temperatures dry out the area, making it more vulnerable to forest fires.

Humans have undoubtedly played a huge part in why certain species of gorillas are now classified as critically endangered.

But the likes of deforestation and climate change aren't the sole reason. Their numbers have declined rapidly due to infectious diseases and it is believed that the Ebola outbreak may have killed as much as a third of gorillas in the early '00s.

Many gorillas are now protected by national and international laws...

But historically, enforcement of these laws has been minimal - meaning their numbers are still decreasing.

This is why the latest news of a pregnant gorilla has caused an uproar of celebration at Audubon Zoo in Louisiana.

The thirteen-year-old gorilla is expecting a little bundle of joy, and to celebrate the occasion, the zoo is holding a virtual baby shower, and you can even donate gifts to the new mom.

Keepers are getting ready to welcome the baby, whose parents are western lowland gorilla, Tumani and dad, Okapara.

And it will be Tumani’s first baby!

Curator, Liz Wilson, at Audubon Zoo said: "Tumani’s quite large. In the last few weeks, she looks like she’s popped a little more."

But before that time comes, staff want to show her some love.

By throwing her a baby shower, and they're hoping people will donate to the new little family.

"Tumani and Okpara are expecting their first infant any time now! As we wait, you can help and get involved by checking out her online baby registry."

The announcement has proven "so popular" with the local community and their Facebook followers.

Which is obvious by the endless messages of support by visitors.

"Gorillas are pregnant for eight and a half months," Wilson explained. "They usually give birth at night. Gorillas also generally nurse right away."

It's not been confirmed if Tumani is having a girl or boy.

Although no matter what the gender, the zoo is just excited that a baby gorilla is being born, considering it's been twenty-four years since a baby gorilla was brought into the world at the zoo.

Wilson said: "We are ready, and we are excited. The community has really rallied, and we all can feel the excitement."

They've even been giving Tumani classes! Which involves motherhood training with a doll, to get her used to the real thing.

The zoo has asked for donations due to the animals being "eating machines."

The zoo typically spends $70,000 a month just on food for the animals.

There are a number of ways people can help...

You can find the link to donate to all of those funds here.

Congratulations to the new family!

Keep scrolling for some incredible selfies taken by anti-poaching rangers and their protected Gorillas...