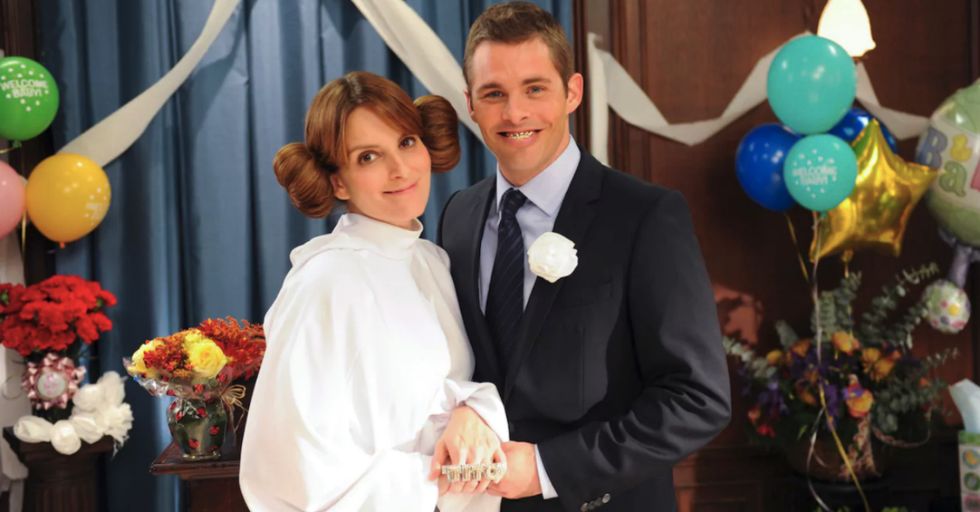 10 Hilarious, Secret '30 Rock' Facts You Need to Know on Its 10th Anniversary

There is a Liz Lemon inside all of us. Whether she's working on her night cheese, dreaming about Astronaut Mike Dexter, or doing her best to corral Tracy and Jenna's insanity, she's making it work and showing us that we can HAVE IT ALL, despite the occasional sandwich mishap.

On the 10th anniversary of this cult classic, we look back at the best 30 Rock moments of all time.  And don't waste time, the show leaves Netflix on October 1st, so binge watch while you can.

Now somebody bring me some haaaaaaaam!

First, let's give credit where credit is due to the woman, the myth, the legend herself: Liz Lemon.

Liz has her ups and downs, sure. Sometimes she makes out with a plant in the dentist's waiting room thinking it's Bon Jovi, but other times she is succeeding at her fast-paced, exciting TV job, wearing bootcut jeans and eating Sabor de Soledad off-brand Mexican potato chips. Interestingly, Tina Fey, creator, showrunner and star of 30 Rock apparently intended the show to be about news, not sketch comedy in the beginning, not unlike the HBO show, The Newsroom. But what would 30 Rock have been without TGS With Tracy Jordan and Jenna Maroney? Or if you're Sid the announcer who was once struck by lightning, "It's Turgis! With Tracky Jon-Jon and Jimmy Moop!"

Luckily, Liz has Jack Donaghy, the best friend/boss a girl could ever wish for. He's dashing, he's debonair, he ran his mother over with a car and didn't check to see if she was dead for 8 minutes. Really, he's the perfect man.

Jack is a firm believer in tradition. He believes that the only acceptable kind of art is a painting of a duck or a boat, that one must switch to formalwear after 6pm lest he be considered a pleb, and most importantly, one must never say no to a redhead with a Southie accent. Tina Fey once said at a Paley Center panel that she was shocked Alec Baldwin even accepted the role. Can you imagine a Jack played by anyone else? During the same panel, Liz said the writers put Jack and Liz's friendship “somewhere between Mary Tyler Moore and Lou Grant and Han Solo and Princess Leia." 30 Rock's costume designer, Tom Broecker, told Zap2It that Alec Baldwin was obsessed with his wardrobe on the show. So much so that he took the suits home when the series ended. Broecker said, "He wrote a big check to NBC... He likes his clothes and wants to look good." And we don't blame him!

Liz also has Jenna, her best girlfriend from the time they were roommates in Chicago, just out of college. Liz and Jenna have been through everything together. They even once promised each other to mutually keep their fame in check if either of them got too big a head, but clearly had job has fallen solely to Liz.

Jenna's charm lies in her ability to make everything about herself. Whether she's channeling Janis Joplin (oh, sorry, I meant Jackie Jormp Jomp, or was it Janie Jimplin?) by eating a house cat, or creating The Problem Solvers with Tracy, Jenna is watching out for her friends. Wait, did I say her friends? I meant herself. In a crazy turn of events, SNL alum Rachel Dratch actually played Jenna in the original, unaired 30 Rock pilot.

In the show's pilot, Liz brings The Girlie Show to NBC, and is forced to add comedian Tracy Jordan to the cast, therefore creating the show-within-the-show, TGS with Tracy Jordan.

Tracy loves his lizard, Jeremy, his kids, George Forman Jr and Tracy Jordan Jr, his wife, Angie, and going to strip clubs for the food. Tracy's biggest secret is that despite his reputation, he's never cheated on his wife, Angie, and is horrified when the world discovers that he's a halfway decent guy. His greatest accomplishment is EGOT-ing (that's winning an Emmy, Grammy, Oscar & Tony for those not in the know). Turns out Tracy (whose name was only slightly tweaked for his role on the show... because he essentially plays himself) has been friends with Grizz and Dot Com (real names: Grizz Chapman and Kevin Brown) for many years. Aww.

This is Tracy's wife, Angie. Rather than making Angie an intern, Jack decides to give her her own reality TV show, created the second show-within-a-show of 30 Rock, Queen of Jordan.

Angie is essentially a walking id. She does what she wants when she wants it. Angie's new single "My Single Is Dropping" is dropping and she will pull your weave out, even if it's not a weave and is just your actual hair. As Angie proves time and time again, this show is a fast-paced joke-a-minute joyride, but did you know that there are actually 9.57 jokes PER MINUTE on an average episode of 30 Rock? That's not all...

We can't forget Kenneth, whose agelessness and earnestness are both deeply disconcerting. Kenneth only loves two things in the world: everybody and television, and if you give him an inch, he will just probably give it back to you.

Kenneth loves people and television so purely, but did you know that he once ate a pig that he considered a father figure? Or that he appeared in Tracy and Jenna's sex dreams? Either way, we love Kenneth for his odd sweetness. And his weirdly accurate memory of old NBC TV shows. The best fact of all is that the writers based the character of Kenneth off of the real actor who played the part, Jack McBrayer. He just really is Kenneth.

30 Rock is also known for its incredible guest stars, one of whom is this 30 Rockefeller Center janitor, played by Michael Keaton, who JUST wants to celebrate his last day on the job before retiring, but ends up in a hallucinatory hellscape when a gas leak occurs in the building.

According to the Nielsen Media Research, this episode of 30 Rock was watched by 4.60 million households in its original American broadcast.

After a few drinks, though, it's not Jenna who goes home with Franco and his sex pillow, but Liz. Gasp. The next morning, Liz's newly-out-of-the-closet nephew, Randy, has to witness her walk of shame, and it's, well... amazing. And absurd.

Perhaps in the most important guest starring role of all time, we have Will Arnett in his turn as the maniacal Devon Banks.

Devon has the hots for Kenneth but forces himself to marry Don Geiss' mute, genderless daughter, Kathy Geiss, in order to take over GE before Jack can ascend the throne. Despite claiming to have been cured of his homosexuality by the Church of Practicology, Devon is just really not good at hiding his true feelings. Writer and showrunner Robert Carlock actually explained to Rolling Stone that he liked letting the more conservative characters like Devon and Jack win battles of the wits oftentimes because, "It’s a lot more fun to let the conservative guy be right more because it’s contrary to what most TV shows are flogging."

Lastly, we just want to thank Dr. Leo Spaceman (pronounced Spu-chemen), the worst doctor of literally all time, for gracing our TV screens (and not our physical bodies) with his medical knowledge, week after week.

In season 4, Liz sings a made-up Christopher Cross song. Turns out, Cross was such a big fan of the show that while they were on hiatus, he finished Liz's fake song and mailed it to the cast and crew.

Then, the writers decided to name Liz's boyfriend, played by James Marsden, after Cross in homage. Except they spelled it Criss Chross, because, well, 30 Rock.

So thank you 30 Rock, for the laughs, the tears, and the boxes full of pen caps without any matching pens.

We're saying yes to love! Yes to life! Yes to staying in more!