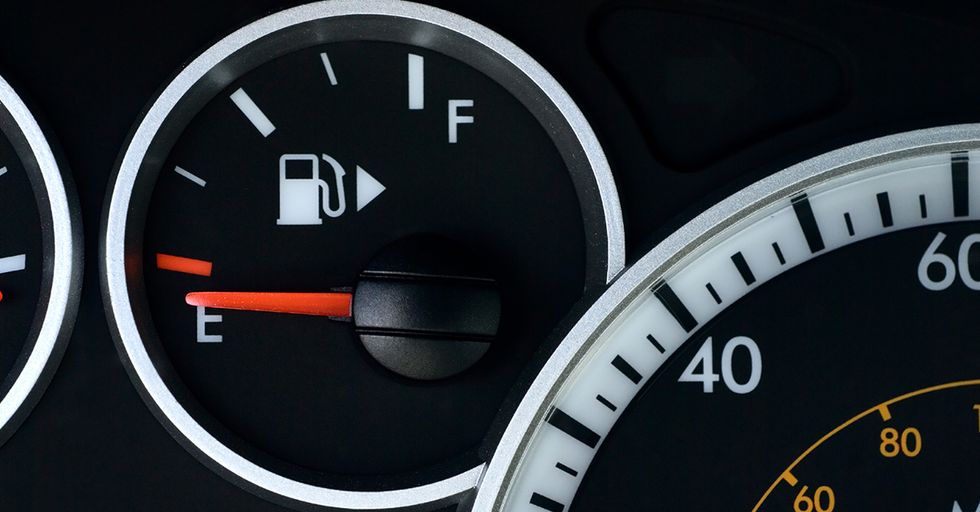 You see them every single day, but do you actually see them?

Here are some little-known facts about objects that you encounter on a nearly daily basis. Who knew?

Have you ever looked carefully at your box of aluminum foil?

Probably not. But if you had, you might have noticed that on nearly every box of aluminum foil (and plastic wrap!), there's a small triangular tab you can pop in. This is to hold the roll in place so it doesn't come out every time you need to cover your food. Brilliant!

You may have been lacing up your running shoes incorrectly this entire time.

Your running shoes most likely have at least one extra eyelet at the opening of your shoe. As it turns out, they're not just there for decoration.

You're actually supposed to use those holes to create something called a "heel lock" or "lace lock." This creates a tighter tie and prevents blisters. (Here's a video of how to create a heel lock!)

Ever wondered what that chunky cylinder on your cables is for?

Again, it's not just for decoration — it'd be kind of weird if it was supposed to decorative, right? That cylinder is called a ferrite bead (or a ferrite choke). Without a ferrite bead, cables can act as antennas, broadcasting or picking up electrical interference. The cylinder is there to prevent that.

Next time you're running on empty, take a closer look at gas gauge.

On most vehicles, there's a small arrow next to the gas pump icon. Conveniently enough, that arrow points to the side of the car with the gas cap. This is especially convenient when you're driving a car that belongs to someone else or is new to you. And once you're actually pumping the gas...

It's designed to hold your gas cap! Simply slip the cap into the notch and you don't have to worry about holding it or just letting it dangle.

Do the pompoms on winter hats actually serve a purpose?

Yes! They do! Legend has it that members of the French Navy wore pompoms on their hats to protect the tops of their heads from the low cabin ceilings. Interestingly enough, there's actually an old statue of the Viking god Freyr wearing a hat with a pompom, so it appears the puffy hat decor goes way back.

Those teeny pockets on your jeans also serve a purpose! (Or at least, they did at one time...)

The tiny pockets on your jeans were actually originally designed to hold pocketwatches. (Hey, I said there was a reason for them; not that you'd necessarily have a use for them now.)

Have you ever felt like winemakers are trying to rip you off by hiding that indent in the bottom of the bottle?

Well, rest assured; they're not. At least, not with the indent (called a "punt"). They might be ripping you off in other ways, though. The punt started out as a necessity back when wine bottles were made of blown glass. If the glassblower didn't create the indent, there would instead be a lump on the bottom of the bottle, making it impossible to stand up. Nowadays, people say the punt is there to collect sediment, stopping it from mixing back into the wine as it's poured. It's also just a continuation of the tradition.

This pasta hack has made the rounds on the Internet before, but just in case you missed it...

According to the Internet, you can use the hole on the inside of your pasta scooper to measure a single serving of spaghetti. Personally, I just make the whole box and have leftovers, but it's always nice to see the hacks that other people have discovered!

Have you ever seen those interesting leather diamonds on the front of your backpack?

Once again, they're not just there for decoration. You can use a clip to attach various gear or even tie a rope through the loop when you're hiking or backpacking. They're usually made from leather because it's a sturdy fabric that won't rip apart.

Here's another hack the Internet made us aware of.

Protect your vision while driving!

Savvy drivers already know this, but in case you missed that day in driver's ed: Most rear-view mirrors have a small tab located at the bottom center of the mirror.
When it's flipped forward, it puts the mirror into "day mode." This gives a stronger reflection. When it's flipped backward (into "night mode"), the reflection is less harsh, meaning it cuts down on how bright the headlights behind you appear in your mirror.

Any guesses about what that tiny hole is next to your camera on the back of your iPhone?

It's a mic. Obviously, it's not used for phone calls. Rather, this mic is used to pick up better audio whenever you're filming videos. Makes sense, but what about that tiny hole in airplane windows? I'm glad you asked.

Not to worry; the tiny airplane window hole is not a sign that your flight is doomed.

It's called a breather hole or a bleed hole, and it's nothing to worry about. Airplane windows have three panes each, and the breather hole is in the middle one. It's there to equilibrate between the cabin and the gap between the two outside windowpanes.

Do your bobby pins always fall out of your hair?

If so, they might work better if you turn them around. Put the bumpy side against your head. This gives the bobby pin a better grip on your hair. Voila!

You know the piece of soft plastic that can be found in soda bottle caps?

Not only did they once serve the function of letting you know when you'd won a free Coke, they also act as a sort of gasket to create a tighter seal between the bottle cap and the plastic ring.

There's actually a brilliant reason behind there being a hole in most ballpoint pen caps.

(And no, it's not to make a fun whistle.) Pen manufacturers created a hole in their caps because they knew people like to chew on them. And you know what happens when people chew on things. Sometimes, those things get swallowed. The hole in the pen cap allows airflow so you can keep breathing...while also contemplating the life decisions that have led you to having a pen cap stuck in your throat.

There are also tiny holes in the bottom of most padlocks

But they aren't for airflow, so don't go chewing on padlocks, OK? The tiny holes in padlocks serve a dual purpose: they allow any moisture that builds up inside to escape, and they allow you to add oil to the inner mechanisms to prevent rust and breakdown.