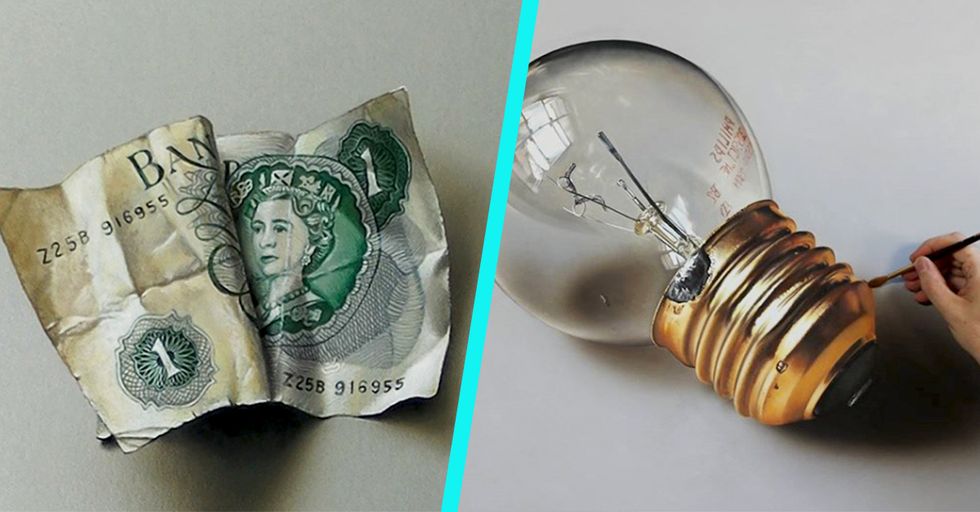 Artist's Photorealistic Drawings Look Exactly Like Photographs, but They're Not

Okay, maybe when he draws a chimpanzee, it doesn't climb off of the page and into your living room to either plant a big wet kiss on your cheek or tear you limb from limb (depending on the mood Marcello drew the chimp in).

But it certainly would appear as though there was a real-life three-dimensional monkey in front of you. And that, my friends, is just bananas.

While the subject matter in Marcello Barenghi's art often portrays common and everyday objects like cans, candy, and comic characters, the level of realism in his work is far from ordinary. To the contrary, Barenghi's three-dimensional drawings are nothing short of extraordinary.

People may not have seen artwork like Barenghi's before, but for Marcello, his artistic abilities are nothing new.

The talented artist grew up in Milan, and was exposed to his father's artistic projects from birth. According to Marcello, his father drew, painted, sculpted, and had a passion for building model airplanes.

The artist was nothing short of a child prodigy in his artistic abilities.

While Marcello wasn't allowed to touch his father's model airplanes, he could draw them, in three-dimensional form, by the time he was 18 months old.

The artist found his medium early on.

Marcello Barenghi discovered his passion for colored pencils in Elementary School and would often draw his favorite comic characters and cartoons.
While the young artist craved a "technique that [would allow him] to color and shade uniformly large areas and backgrounds, without the granular texture," his use of colored pencils still managed to win him several notable awards in his childhood. And he wouldn't stop there...

During his time in Art School, he learned to create copies from life using charcoal and sanguine pencil,along with the techniques of tempera, watercolor and 3-D modeling with clay.

He also discovered the solution to his colored pencil problem.

Upon discovering the airbrush, Marcello was able to make his artwork even more realistic and cover more ground and without the granular texture that color pencils tend to create.

Yet after Art School, the artist actually quit pursuing his art entirely.

Technological advancements in computer graphics during the 90's created career concerns for Marcello. Considering that a computer could suddenly create the same levels of realism as Marcello but in less time and for a lesser cost in labor, he worried that his talent was no longer as valuable . These concerns motivated Marcello's decision to put down the pencils and hit the books. Marcello quit drawing completely and dedicated himself fully to his studies.

For many years, the artist chose to focus solely on obtaining his college degree.

Barenghi attended the Polytechnic University of Milan, where he passed the Italian professional exam and graduated with a degree in Architecture.

However, Marcello's decision to pursue a practical career did not ultimately provide him with the same passion and fulfillment that his artistic endeavors once did.

In fact, Barenghi was working at Blockbuster for 15 years prior to revisiting his passion for art. Barenghi writes:

If I hadn't lost my job in 2013, you would probably never have seen my drawings. Unemployed and with nothing to lose, I opened my Youtube channel and I started drawing again...

Yes. You read that correctly. The artist was not only working at Blockbuster; he was laid off. While at first things may have felt hopeless for Marcello, it wouldn't take long for him to draw himself a silver lining...

Fate leads the artist back to his passion.

After 20 years, when his professional path did not pan out for Marcello, he found himself watching videos of drawing on YouTube. Barenghi decided to take a leap of faith as he once again pulled out his paper and colored pencils.

Barenghi shares the disappointment he experienced while taking the road most traveled.

I could spend a lot of words talking about the disappointment that I got in my passed working career, but I prefer to focus on the positive things. So, twenty years after quitting, as I watched some drawing videos on YouTube, I decided to open a channel and start a new adventure...

Marcello Barenghi's leap of faith back into the world of art is paying off.

The talented illustrator now has well over 1 million subscribers on his YouTube channel, where he shares videos of the step by step process through which he creates his artwork and is getting quite the response.

Berenghi's uber-realisitic drawings have people asking, "Is it a drawing or a picture?"

Marcello Barenghi's artwork appears so life-like that it's hard to believe it's NOT real. While most people's reaction to Barenghi's work is pure amazement, others just don't know how to process its photo-realistic appearance and question whether his works are actually photographs, drawings, photoshopped, or just straight-up black magic.

While some people are amazed by Marcello's talent, others struggle to even comprehend it. Clearly, Barenghi is amazingly talented. But what's even more amazing are some of the comments questioning Barenghi's artwork.

Of course, true to social media form, people question, debate, and conspiracy theorize as to whether or not Marcello's drawings are actually photos.

While the cynicism people tend to project toward anything in this world that surprises, enlightens, or amazes them, is kind of annoying, it's also kind of a huge compliment.

Marcello Barenghi's work is so realistic that it's awe-inspiring. But people don't always enjoy being "awed." It kind of freaks them out. It leads them to dissect, over-analyze, question, doubt, criticize, and make accusations that rationalize their previously held beliefs.

But Barenghi's art is real. Actually, it's REAL AF.

Marcello Barenghi don't practice Santeria. He ain't got no crystal ball. But he'll probably soon have a million dollars, and who knows, maybe he'll spend it all. Yet, somehow, I doubt this talented guy has anything to worry about financially in the future.

Here's a time-lapse video showing that Barenghi's work isn't the black magic voodoo that internet trolls were hoping for. Note that he is also not placing a bag of M&M's on a piece of paper and taking a photograph of it. Imagine that? Just REAL talent at work.

There are two conclusions to be drawn from the comments questioning the authenticity of Marcello's work. #1 People are idiots #2 And this guy is so good, people just literally cannot even believe it. While #1 is a given, #2 is a testament to Barenghi's unique talent. So every time he reads a hater's comment, let's hope he gives himself a pat on the back.

With talent like this, Marcello Barenghi has a sweet future.

And now I want Peanut M&M's. And they're right here, in front of me... but they aren't real. Kind of a tease, Marcello. But a talented tease, no doubt.

It's not only people that Marcello has dumbfounded.

Violetta is super pissed over this faulty ball. Again with the teasing, Marcello!

Some people are so impressed with Barenghi's realistic drawings that they're even suggesting new types of canvases for his artwork.

Like Twitter user Pancake&BoozeArtShow, who wonders if Marcello could hook him up with a 6 pack through a little 3-D shading. You might be onto something, Pancake&BoozeArtShow. Afterall, I wouldn't mind a few touch-ups myself. I have no doubt that 3-D tattooing is not that far off in the future if it's not already "a thing" (that was me admitting that I have no idea about anything remotely hip or cutting edge). But whatever is hip and cutting edge in the art world, I'm sure Marcello Barenghi is a part of it.

While certain drawings by Marcello cause candy cravings, some of his realistic subjects are better left in the second dimension.

While the M&M's had me wanting to reach through the screen, this one has me slowly backing away from the computer. Pretty sure even Planet Earth has got nothing on Barenghi's skills.

The artist is currently saving up for his first solo exhibition.

In addition to selling prints, magnets, mouse pads, coasters, mugs, and you-name-its on his website, marcellobarenghi.deviantart.com, the artist is also offering monthly high-quality downloads and in-depth tutorial videos to those who make a small monthly donation at Patreon.com. Donations will help fund Marcello's first solo exhibition.