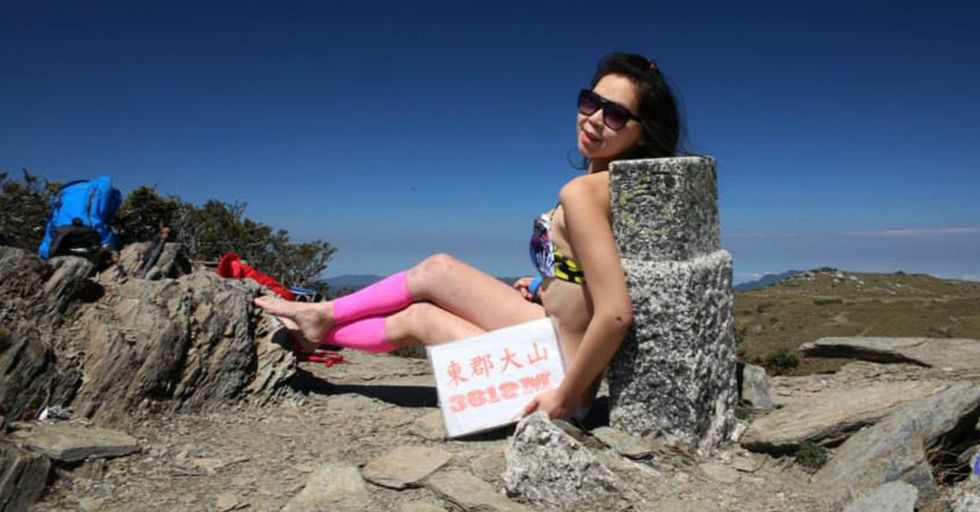 'Bikini Hiker' Falls From Mountain and Freezes to Death

Intense hiking is no joke. For some climbs, vigorous training and proper gear is required. It can take months to prepare yourself for a hike. When you're literally scaling the side of a mountain, it's important to be aware of your surroundings, dressed properly and taking safety precautions. But sometimes freak or tragic accidents occur.

For a woman dubbed the "Bikini Hiker," this was sadly the case.

36-year-old Gigi Wu became famous on the Internet for hiking mountains and then taking pictures of herself in a bikini. She fell to her death in Taiwan, falling more than 65 feet near Mabolasi Mountain in Nantou County. She was on a solo mission, hiking alone along the mountainous terrain.

According to the Taiwan News, Wu made a call via her satellite phone on January 19. She was calling for help after she fell and suffered injuries from her fall. But because of bad weather, The National Airborne Service Corps were unable to locate her.

But the weather was so poor that they were unable to locate her, despite her distress call. Eventually, authorities found her body close to where she had made the call.

Wu placed a call to the fire department, explaining that she became trapped after falling. According to Commander Lin Cheng-I of the fire department's Third Squadron, Wu's distress call was made at about 5,577 ft above sea level.

While Wu was trapped on the mountain, the temperature changed drastically.

According to reports, the temperature dropped to around 35 degrees. Investigators believe Wu died from hypothermia.

The weather was so brutal that the rescue team was waiting until conditions improved before moving her body.

Wu garnered quite the social media following. She climbed several mountains in Taiwan, and would always pose in swimwear no matter the height or weather.

Wu claimed to have gone on 100 hikes, posing in 97 bikinis over the last four years.

She said she got the idea after she lost a bet with a friend. She then had to take bikini pictures on a mountain because of losing.

At the time of her death, Wu was in the middle of a 25-day solo trip.

Hiking can be a wonderful hobby and activity, and venturing into national parks can be a glorious thing.

But it's super important to be aware of your surroundings and make sure you're properly trained/understand your environment. What happened to Wu was an upsetting and tragic accident.

Some people are afraid of bears in national parks, not hiking.

And while bears are no joke, there are other causes for deaths in national parks. But don't be scared!

The chances of dying in a national park are super low.

National parks are very safe and beautiful. But what does cause someone to die when visiting a national park?

First off, remember that the odds of dying in a national park are very, very low.

According to The Washington Post, roughly somewhere between 120 and 140 people die yearly in national parks. This number does not include suicides.

If you're freaking out, don't.

You have to remember how many people visit national parks.

So the chances of you dying in a national park are about 1 in 2 million.

But if you were to die, it probably wouldn't be from something you would expect to die from in a national park.

The number one cause of death is drowning. Car crashes come in second – which, can happen anywhere, not just in a national park.

The reason for the car crashes is actually very interesting...

Apparently, 27% of vehicle accidents in national parks are caused by people being distracted by the scenery. Keep your eyes on the road, people!

Alcohol was also involved in a percentage of vehicle crashes.

But to die from an attack from wildlife – it's very rare. In fact so rare that it's the least likely to happen.

So those nightmares you have about a bear dragging you out of a tent?

They're just nightmares. Although, that is precisely why some people hate camping. Just the thought alone of that happening is horrifying.

Another hiker had been killed by a mountain goat. That has to be the least likely way to die in a national park.

Did you know that men are more likely to die in a national park than women?

A study showed that 75 percent of deaths in parks between 2003 and 2004 were men. That's pretty alarming.

There are certain international visitors who are more likely to die than others.

These statistics should not deter you from visiting parks.

It's super important to be aware.

Know your environment, be prepared, and use common sense. For instance, if you're a novice hiker, it's probably best to not go alone.

But there are so many gorgeous sites to see and you can't let fear keep you from exploring the world.

The Matterhorn in Switzerland is stunning. Who wants to book their plane tickets?

I could spend hours scrolling through photos of national parks.

While hiking can seem scary...

The views and experience can be breathtaking.

These pictures would make anyone want to move to Montana, ASAP.

"Stunning" doesn't even begin to cover it.

They look like something straight out of a painting.

The Sequoia National Park is amazing.

This photo was snapped specifically in Crescent Meadow.

As this Instagram user explained, this photo was taken at Artist’s Pallet in Death Valley.

So yes, while there is danger in national parks...

There's a ton of beauty there as well.

But it's like anything. It's important to be safe.

Do you love visiting national parks? Are you an avid hiker? Let us know!