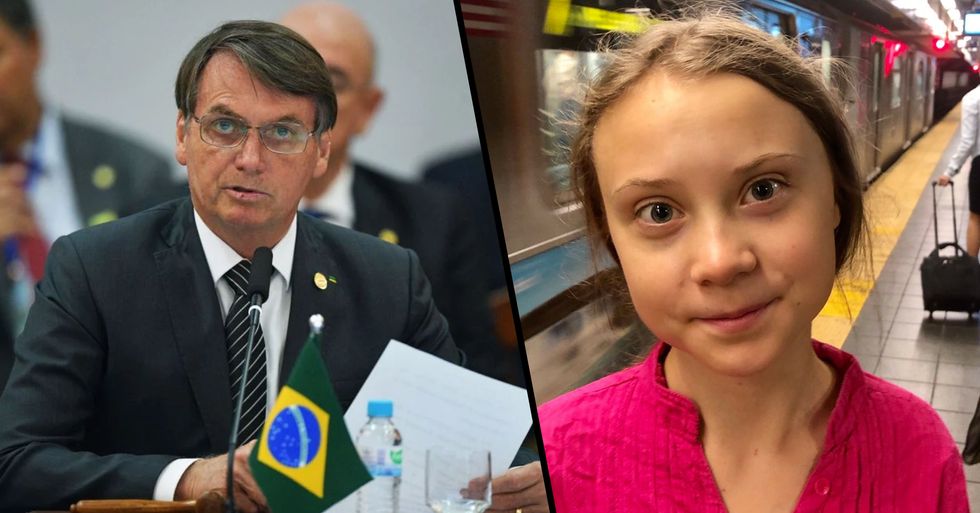 There has been only one name that has been the center of almost every major debate this year and it is our favorite Swedish climate activist, Greta Thunberg.

However, as with anyone trying to do a good thing, she has been met with much criticism along the way. From prominent world leaders, all the way to Dave who works at your local Wendy's, it seems as a lot of people have a big problem with a young girl trying to have a positive impact on the world.

The latest celebrity to join the list is none other than the President of Brazil.

Keep scrolling to see the harsh comments he made against the sixteen-year-old...

And of course, people slammed the President for attacking the young activist, but that didn't top the rest of the haters from piling in.

Then Jeremy Clarkson decided to throw his opinion into the mix.

The former Top Gear host branded Thuberg an "idiot" and blamed her for "killing car shows."

He told The Sun:

"Everyone I know under 25 isn’t the slightest bit interested in cars – Greta Thunberg has killed the car show. They’re taught at school, before they say ‘Mummy and Daddy’, that cars are evil, and it’s in their heads."

"She’s an idiot. Going around saying we’re all going to die, that’s not going to solve anything, my dear." That's Clarkson for you, always keeping it classy.

His co-host Richard Hammond also agreed with him saying:

"I hate to say it, but I think Jeremy is right."

That wasn't the only time Clarkson spoke out against the activist.

Just a few months ago, after Greta gave her infamous speech, he urged that she needs to "shut up like a good girl."

"How dare you stand there and lecture us, you spoilt brat."

Writing in his column in September, he said: “Pause for a moment to consider how soundly you sleep at night, knowing that adults are building and servicing and flying Sweden’s fighter planes to keep you safe. We gave you mobile phones and laptops and the internet. We created the social media you use every day and we run the banks that pay for it all." We can always count on a man like Clarkson to try and "keep it real" while making himself look like an absolute idiot. Well done!

The beef between Greta and the President of Brazil started on Twitter.

As all issues regarding global politics seemed to be pitted on Twitter nowadays...

The President of Brazil, Jair Bolsonaro was unhappy about Greta's tweet.

Her tweet displeased him so much in fact that the President decided to make his personal feelings towards the sixteen-year-old public.

Thunberg's tweet was regarding the slayings of indigenous Brazilians in the Amazon.

Indigenous people are literally being murdered for trying to protect the forrest from illegal deforestation. Over a… https://t.co/QZgvlgxyQ9
— Greta Thunberg (@Greta Thunberg)1575827109.0

Brazil's President did not like Thunberg raising awareness on this issue one little bit...

Basically, long story short, Thunberg's tweet was damaging to Bolsonaro's image- and made it seem like he isn't doing a very good job...

In response, Brazil's President spoke to a group of journalists and said: “Greta said that the Indians died because they were defending the Amazon. It's impressive that the press is giving space to a brat like that."

However, instead of "brat", he used the Portuguese word "pirralha."

Greta isn't afraid of Jair Bolsonaro nor what he thinks of her.

In fact, upon hearing what the Brazilian President said about her, the environmental activist changed her Twitter bio to "pirralha" - wearing the insult like a badge of honor. Greta really is a total badass. And, thankfully, some people can see that... continue scrolling to read about Thunberg's friendship with Leonardo DiCaprio.