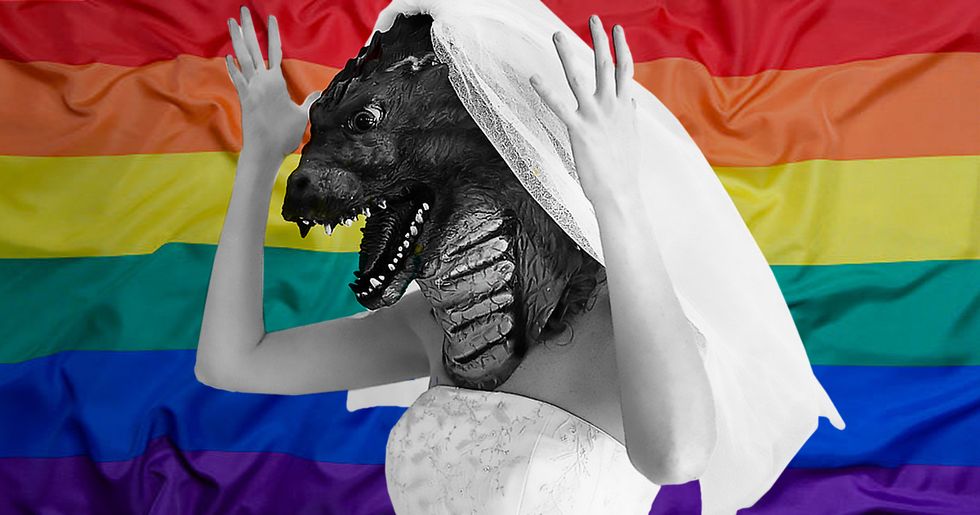 It's wedding season. And that means that around the world, thousands of couples are about to make the biggest decisions of their lives. That also means that thousands of parents and grandparents are quietly huffing in the back row as they disapprove of whoever their precious son or daughter is marrying.

And it's with a heavy heart that we bring to you one of those stories today. Usually, Bridezillas are hilarious, over-the-top monsters who will crush anyone in their path to the perfect wedding. Hell, TNT even made a show about it. But every once in a while, bridezillas are actually just cruel.

And that was the case of one Redditor who just wanted to let his gay son (and best man) bring his boyfriend to one of the most important days of his life. But Bridezillas ruin everything, as we learn while this Redditor recounts the predicament that he's in.

The story was posted on the subreddit /r/AmItheAsshole, where it's users tell a story and ask if they were in the wrong in any way.

The author, /u/throwaway-thewedding, starts by giving a little background info.

You know, gotta start the story off right.

My son was born when I was only 15 years old, and I’ve been a single dad since I was 18. It was hard living for a long time money-wise but I always tried to do best by my son.

Sounds like a pretty good dad so far. Having a kid at 15 is about as hard as it could get.

Today I own my own gym and my son is now 22 and going to college and works at my gym full-time. He came out to me when he was 14 years old and I’ve always been supportive of him and his identity.

I have a lot of friends who didn't come out until well after high school. He definitely is a kid who trusts his dad.

But then... things turn from wholesome to bad real fast.

I’ve been with my fiancé now for about 2 years and while she does come from a very deep religious and conservative family, she has never had any issue with my son – at least nothing she has ever expressed to me. My son has been dating his boyfriend since he was 18 and I’ve gotten to know him really well.

However, my fiancé told me recently that she does not want my son’s boyfriend to come to the wedding.

Nor does she want her parents to even get the inclination that my son is gay. That if they found out, they would have a complete fit.

You want your future step-son to just pretend he's someone he's not so that your old, backward parents can be happy?

I would love to see an alternate world with the reverse situation. "We're not inviting anyone but gay couples to this wedding. And I swear to God if you're straight and you bring your partner, I will freak out."

This really bothered me because I refuse to ask my son to go back in the closet.

What is going to happen in the future? When my son gets married himself? Will they want him and his husband barred from other family events?

Seriously. Does he have to start bringing along "girlfriends" every time they go to Thanksgiving?

What happens if the person he's marrying decides she's not okay with her husband's son's lifestyle? It just becomes such a slippery slope.

He’s my son and will be the best man and it would be unfair to deny him a plus one because her family has an issue with gay people.

When I told her this, she got very angry with me and told me that I was being selfish and over-dramatic – that it would just be for this one day, that she wants the perfect wedding. I told her that this was unacceptable and that I was not going to ask my son not to bring his boyfriend.

It’s my wedding too and I want his boyfriend there.

Heck yes, dad! It's your wedding too! If your son can't be happy and bring his date, then it's not "the perfect wedding", now is it?

He's now thinking of calling the whole wedding off.

After that, I got the silent treatment for a day and since then it hasn’t been discussed again. However, it has left an extremely bad taste in my mouth and has me contemplating calling the wedding off. I do not want to marry into a family that would potentially discriminate against my son.

I love my fiance very much but my son will always come first.

That's the way it should be. Family is everything, and if his future wife doesn't understand that, then maybe she doesn't have what it takes to be in this family.

Thousands (literally) of messages of support poured in from fellow Redditors.

People think he should call off the wedding.

Or at least seriously consider it.

It seems like if she's making a request like this, she probably doesn't have a lot of empathy for her fiancé's son.

And maybe it's for the best.

You only have one family. How does his son feel that his future wife doesn't want him being himself at their wedding?

At that rate, he might as well not go.

If his step-grandparents aren't going to be okay with who he is, are they just never going to tell them?

It's not the grandparent's day.

And it's not the bride's day either. It's the couple's day.

And I think children should take precedence over parents, especially if the grandparents are being bigoted.

But obviously, it's not my decision! Unfortunately, the original poster (OP) hasn't left an update, but we'll update the article when/if he does.

What if the in-laws don't care?

I mean, sure they might have held that belief in the past, but people change.

I was raised in a very religious house, and I think everyone in my family has made this change.

There are even more red flags.

It is worrying that she won't hear his side of the argument suggesting she feels she is completely in the right on this issue.

If I made this request, I would know how unpopular it is, and try to reason with my fiancé.

She won't even listen to what her future husband has to say. Major red flag!

This is my big fear about the whole situation.

She's asking for this once. What's to say she doesn't ask for it again and again?

What happens when it's Christmas, and he wants to spend the morning with his son?

But his son wants to spend the day with his boyfriend (or husband in the future) and she's not cool with that?

I wonder if she'll ever have the courage to tell them.

Like, god forbid there are gay people that exist on this earth and their daughter is mildly associated with one.

It seems clear to me that they've never even met a queer person in their entire lives.

Or, if they have, those poor people had to deal with a bunch of their bull.

He would be an asshole if he tells his son's boyfriend to stay home.

Someone that he's known for years at this point -- someone that seems like a defacto part of the family.

What do you think about the whole situation?

Is the husband the asshole for not understanding how his future wife's family might feel. It is just a plus one after all.

Or is she the asshole for asking his future husband's boyfriend's son to stay home?

Would the grandparents even notice the two of them being together? Especially if he has Best Man duties?