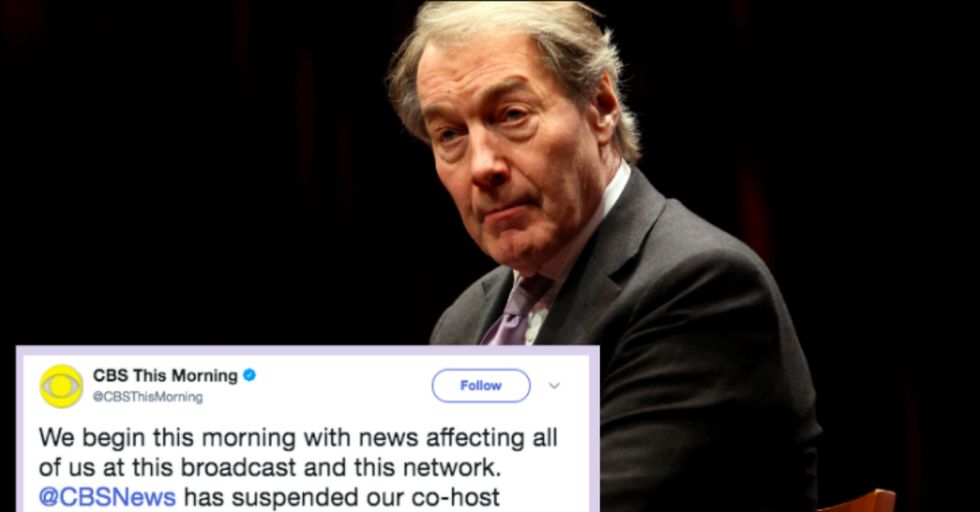 There's yet another name to be added to the list of public figures accused of sexual misconduct. It's a list that's already becoming too long to keep track of, but as long as victims continue to come forward, there unfortunately doesn't seem to be an end in sight.

Eight women have come forward to accuse talk show host Charlie Rose of sexual harassment. Amid the fallout, Rose was first suspended from CBS and ultimately fired. His show on PBS has also been canceled.

The allegations come from eight separate women who either worked with Rose or aspired to work with him.

The story was originally broken by The Washington Post. The report lists several behaviors of Rose's that the women found inappropriate, including lewd phone calls, walking around naked in their presence, and groping their breasts, buttocks or genitals.

The women's experiences occurred as early as the late 1990s and as recently as 2011.

Five of the women said that Rose put his hand on their legs and upper thighs in order to gauge their reactions. Two women saw him emerge from a shower and walk naked in front of them. One woman says that Rose grabbed her buttocks at a staff party.

At least one of the women — associate producer Rhea Bravo — says that she was inspired by the stories of sexual misconduct victims that have been permeating the news for the past few months.

"It has taken 10 years and a fierce moment of cultural reckoning for me to understand these moments for what they were, "He was a sexual predator, and I was his victim." Another woman, Kyle Godfrey-Ryan, says that while she was Rose's assistant in the mid-2000s, he repeatedly called her to describe his sexual fantasies of watching her swim naked in the pool. While eight women have come forward, the Washington Post reports that they spoke with an additional two dozen women who have worked with Rose in the past. Of those women, six said they saw what they considered to be harassment, eight said they were uncomfortable with Rose’s treatment of female employees, and 10 said they did not see or hear anything concerning.

After the Washington Post report, CBS suspended Rose from the morning show he had been co-hosting since 2012.

We begin this morning with news affecting all of us at this broadcast and this network. @CBSNews has suspended our… https://t.co/r3ku7tJvWY
— CBS This Morning (@CBS This Morning)1511265865.0

This morning's broadcast opened up with the other two anchors, Gayle King and Norah O'Donnell, stating that Rose had been suspended. The show then went on to report on the allegations against the former co-host. King and O'Donnell each spoke candidly about the effect the accusations had on them personally. "This is a moment that demands a frank and honest assessment about where we stand and more generally the safety of women," O'Donnell said. “Let me be very clear: There is no excuse for this alleged behavior. It is systematic and pervasive. This has to end. This behavior is wrong. Period."

Later that day, CBS announced that Rose had been fired.

"This is absolutely nothing more important, in this or any organization, than ensuring a safe, professional workplace — a supportive environment where people feel they can do their best work," David Rhodes, CBS president said in an official statement. "We need to be such a place." Rose also made an official statement.

"[I]n the past few days, claims have been made about my behavior toward some former female colleagues," Rose said in his statement. "It is essential that these women know I hear them and that I deeply apologize for my inappropriate behavior. I am greatly embarrassed. I have behaved insensitively at times, and I accept responsibility for that, though I do not believe that all of these allegations are accurate." Surprise, surprise — he's denying the validity of the allegations.

People are reacting to the news of Charlie Rose exactly like you'd expect.

Why does there appear to be such a wide range of responses when it comes to the way we deal with certain people after these types of allegations come to light? It comes down to more than just the severity of the crime. There's clearly something more going on here.

Not only is Roy Moore still running for Senate, but Donald Trump is still the president.

It's been said before, but it's still just as valid. 16 women have accused Donald Trump of sexual misconduct. That's twice as many as have come forward to accuse Rose. And Rose is fired. But Trump continues to hold one of the most powerful positions in the world.

With @CBS' firing of #CharlieRose, we now have yet another example of the entertainment industry having a higher re… https://t.co/ooKqvQrRwV
— John Pavlovitz (@John Pavlovitz)1511286973.0

Let's not forget that Trump has also dabbled in television appearances. Surely his pop culture status should be enough to draw some ire, no?

Regardless, there's one thing that we can hopefully all agree on: We need to believe women.