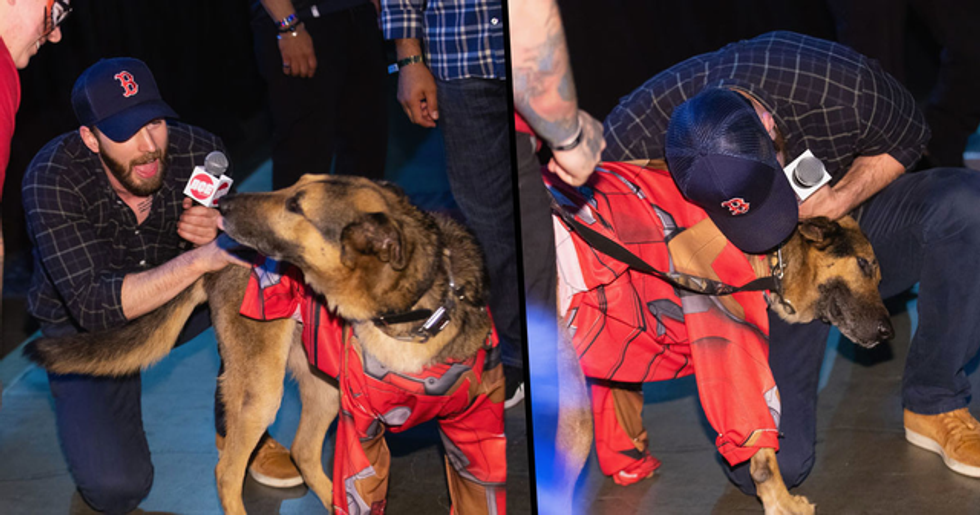 Everyone loves The Avengers, right? It's probably one of the most unifying film franchises of all time, with legions of almost absurdly loyal fans. But if there's one thing even more unifying than a superhero franchise, well, it has to be a cute dog, right?

This story combines both, so you can understand why the internet is so obsessed with it. Chris Evans, known for playing Captain America and being an all around good guy, was speaking on a panel at the ACE Comic Con in Seattle. But he was interrupted - not by a crazed fan, but by a crazily cute dog.

Showing that he's only human, Evans left the stage to interact with this cute pup. And, as you can probably imagine, Twitter has gone wild for the heart-melting vid.

The first of which, let's face it, is being an absolute heartthrob. Is it just us, or is he topless an inordinate amount of the time?

Just look at him.

But now, there's one role that he's best known for.

The Avengers movies are incredibly popular.

But the whole of the story is based on events from the Marvel Comics - making the movies something of an adaptation. This means that they have a firm place in the hearts of comic book fans.

And the stars are welcomed at any Comic Con event.

This week, Evans spoke on a panel at the ACE Washington Comic Con, much to the joy of a legion of adoring Avengers fans.

He wasn't alone on the panel.

Alongside Evans were Avengers: Endgame co-stars, Jeremy Renner and Don Cheadle, who play Hawkeye and War Machine respectively. The panel was hosted by Angelique Roche.

Interactions between Renner, Cheadle, and Evans are always pretty heartwarming to watch, and this panel was no exception.

And fans of the franchise were overjoyed.

But if there's one thing that Evans seems to love more than talking Endgame and interacting with his fans and his co-stars?

Well, it has to be dogs.

Evans has been open about his canine obsession in the past, saying "God, dogs, they're such great animals. I really can't say enough about dogs, I'm a dog lunatic."

Dogs are something that we can pretty much universally rely upon to cheer us up - and that makes them very special indeed.

And, this week, Evans proved his love.

In the middle of speaking, he spied a cutie in the audience - in costume, of course. So Evans did what any reasonable man would do -  he leaped off stage to pet the little guy.

Many filmed the incredible moment to share it with the world - and, for that, we have to say "thank you!"

Now that's a look of pure love and joy. Oh, to be that costumed dog.

Evans has been open about his doggy love before.

This is the moment we met. He was trying so hard to stay seated even though he desperately wanted to get out. I kne… https://t.co/UpKejl9Aqx
— Chris Evans (@Chris Evans)1523453914.0

He even has an adopted pooch of his own. Last year, he shared this incredible video of the moment that the pair met on his Twitter account.

And the internet is obsessed with this story.

Honestly, just when you thought that Chris Evans couldn't get any more perfect, it turns out he also loves dogs. Incredible scenes.

He's spoken about his love for his own dog many times.

"He's up for anything," Evans revealed about his own pet, Dodger. "He sleeps on my pillow, you wake up face-to-face."

It's clear that he's pretty besotted.

And now his status as a dog lover has been cemented.

@voiidmarvel This is just so pure and the cute baby cuddling with @ChrisEvans is just so adorable I don't even have… https://t.co/tFbfLcblrZ
— Naina (@Naina)1561930682.0

We've got the video of the moment that Evans realized there was a dog in the audience coming up.

The internet is clearly impressed.

@voiidmarvel The way he jumped to the stage 🥰🥰 #chrisevanshassuperserum
— Jean Achilles (@Jean Achilles)1561956582.0

Many drew attention not only to the pureness of Evans' heart, but the strength of his legs!

Although many had a pretty simple reaction.

This video basically contains two of the world's cutest creatures in one - Chris Evans, and a dog dressed as a superhero.

It's no wonder thatthe internet has lost its collective mind.

We think that this is just the piece of cheery news that the world needed this week, considering all the misery that we're seeing elsewhere.

Even those in the room at the time were obsessed.

The reactions of Evans' co-stars to his adorable lack of self-control around dogs makes the vid even more precious in our eyes.

The internet already had a collective crush on Evans.

But now things have gone from intense to extreme - and it's all because of this one (admittedly heartwarming) video.

Evans is supposed to merely play a superhero rather than actually be one. But it seems, when there's a dog involved, he develops some pretty crazy powers.

Which is a pretty hard thing not to feel warm and fuzzy about.

In a moment that can only be described as "pure," Evans hugs the dog, while softly saying, "hey, pal," into his ear.

Oh, and that's not the only cute thing that Evans did at Comic Con.

There is one downside, though.

As one Twitter user pointed out, we'll all just have to hope that Dodger understands and that it doesn't affect their relationship.

Here's the first part of the video.

I can totally related to @ChrisEvans jumping off stage midway through a panel to pet a dog! "Is that your dog?"… https://t.co/RZnVLvZCJ3
— Suffering Sappho (@Suffering Sappho)1561967538.0

You can see the very moment that Evans realizes the audience has one canine member.

And here's the cuddle session.

Our hearts are full. Thank you, Chris Evans, for injecting some cuteness back into the world!