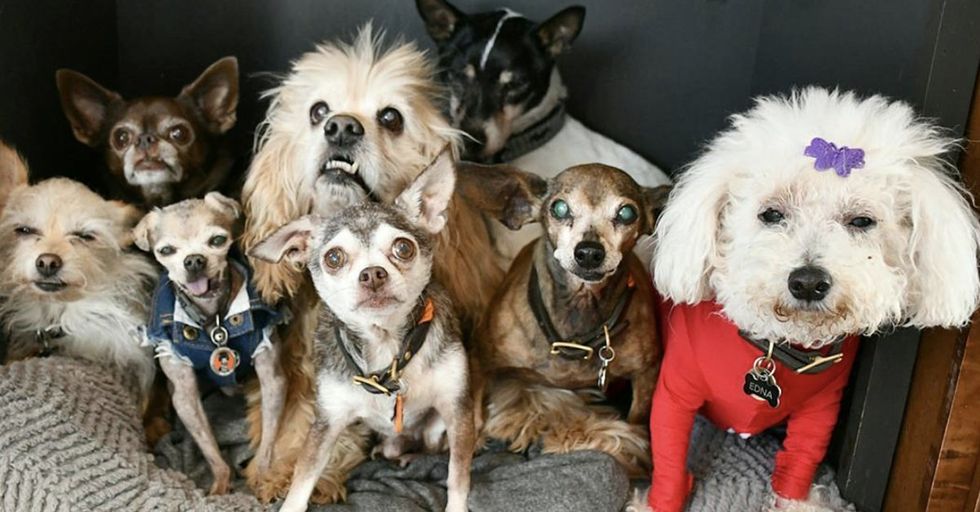 Get ready for one of the cutest animal adoption stories you'll ever read!

It's common knowledge that older animals have a hard time finding people to adopt them. On the one hand, you understand why--a lot of people would rather adopt a pet that they'll have for a good long time. But on the other hand, those senior animal citizens deserve to live out their twilight years loved and cared for. Even if it'll hurt us to say goodbye to them when the time comes, those animals also need good homes.

And one man is doing way more than most to make sure a whole pack of senior citizen pups get that loving home. Steve Greig found himself utterly distraught after the death of his dog. But what he did next is pretty extraordinary: not only did Steve go looking for a new canine companion, he ended up adopting 8 'unwanted' pups from local shelters.

A while ago, Steve Greig lost one of his dogs.

“I was just so distraught about (that death)," Greig told The Dodo. “A month or two went by, and I still felt so horrible about it. I decided that the only way I would feel better was if something good happened. That probably wouldn’t have happened if he had not died."

So he found an unorthodox way to heal.

Greig went around to animal shelters in his area, and asked them for all the dogs that "nobody wanted."

Greig wasn't worried about the number of pets he was about to adopt.

“I grew up with a lot of pets," Greig said. “Both my parents were animal lovers and they pretty much always let me have whatever I wanted as long as I could take care of it."

And he can definitely take care of his large, fluffy family!

Greig is an accountant in Colorado, but he makes plenty of time for the many animals who share his home.

So he began adopting.

“So (I adopted) a 12-year-old Chihuahua (named Eeyore) with a heart murmur and four bad knees, and I brought him home, and that was just the beginning of all the animals," Greig said.

Now he has eight senior dogs.

Plus his sister's dog, and he lives with his roommate's pooch as well, making for ten total dogs in the household!

Let's meet them all!

It's a chihuahua party.

And here's Engelbert, another senior chihuahua!

What a cute little ball of fluff! She's a senior mixed-breed terrier.

This sweet old girl is Doris.

She's blind and deaf with heart problems, but she's also a cuddly and smiley pup who joined the gang about a year ago!

Pictured here, fresh from a romp around the yard!

I told Melvin I would give him top billing in the next picture. I did not tell him a bath would be involved. -wolfgang2242

Steve tries to have one-on-one time with each of his fur babies.

Eeyore may have a drinking workday Actually, since I have 7 dogs we do most things in a group. So I try to give each dog at least one thing that they get to do with me alone. Eeyore's is the weekly, okay fine sometimes more than weekly, trips to the liquor store. A lot of the cashiers know him by name, and he's been known to point me in the direction of some of my better wine choices. -wolfgang2242

Sometimes he'll take one or two of them along on vacation.

Like this trip to the New England coast with little Loretta!

Or this NYC trip with Engelbert.

But having all these pets mean that Steve has a lot of caretaking to do.

"A normal day for me is getting up at 5 am in the morning and making breakfast for all of them, which, you know, there are 10 (dogs), and most of them have different diets," Steve said.

There are also health issues.

One of the unfortunate things that go with having senior dogs is the health issues that they develop. Greig then goes to work and returns in the afternoon to give them lunch.

Although according to Steve, the commute home and back isn't much trouble.

My office is only a few blocks from my home. The most traffic I encounter on my commute will be right at my back door. Eeyore, Englebert, Loretta, Edna, Ignatius. -wolfgang2242

At least the animal family never gets lonely!

Even when dad is at work, they've got a lot of company in each other.

Weekends are filled with grooming appointments for the doggy fam, and of course, they need to get out of the house and have some fun too!

And Steve doesn't just have dogs.

You may have noticed his pig by now; her name is Bikini and she's pretty sure that she's a dog as well!

The menagerie doesn't end there.

Greig is also the proud caretaker of several ducks, chickens, pigeons, rabbits, and cats, plus a pond full of fish.

And he posts plenty of pictures of them, too!

The only way rabbit that will ever be served at my table. Stuart the rabbit. -wolfgang2242

Here's Edna in the chicken coop.

Steve's diverse collection of pets even includes two transgender chickens! Laverne and Shirley were supposed to be female chickens, but have since decided they'd rather take the rooster route. And that's all good with the rest of the family!

It's so cloudy and cool today even Bikini went on the walk so we brought the wagon. And no, Bikini isn't trying out a radical new hairstyle, she loses her coat once a year and its mohawk first this year. -wolfgang2242

And they celebrate all the big holidays together.

Edsel will literally let just about anyone pet him. #witchisagoodthing Starting to think about Halloween... -wolfgang2242

And they don't have to be the same species to get along!

Although photo shoots are still a chore. Unlike yesterday (see last post) this was not as easy as just putting Stuart on top of his head and taking the picture. It involved a lot of blackmail, extortion and a large sum of unmarked bills transferred to Englebert's Swiss bank account.  -wolfgang2242

All in all, they're the perfect definition of found family.

The beauty of misfits. (Waylon fell asleep...?) Edsel, Enoch, Englebert, Edna, Waylon ?, and Veronica chicken. (And wayyyyyyyy in the back is Eeyore.) -wolfgang2242 Are you as in love with these amazing dogs as we are? Share this heartwarming story with your friends!
20%