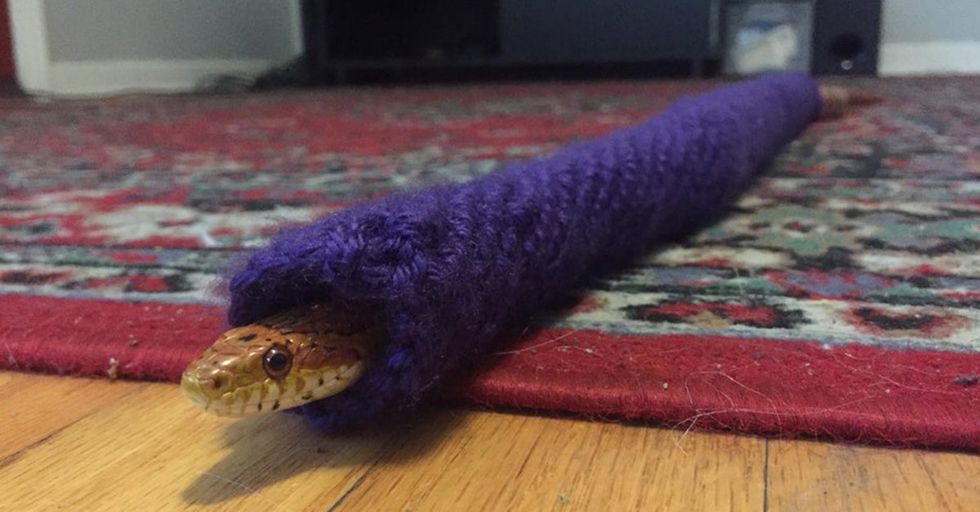 Just The Absolute Cutest Animal Images on the Whole Internet

While animals are constantly doing cute things like making funny faces or becoming friends with other kinds of animals, it wasn't until the internet came about that we got to see pictures of that adorableness. And with all the anger, hatred, and paranoia the internet is constantly pumping into our brains, the least it can do is occasionally offer up some occasional cuteness in return, right?

Here are some of the cutest moments from the cutest animals the internet has ever stumbled across. You're going to swoon, You're going to gush, and you might even tear up just a little bit just because of the cuteness. But here's the thing — you will want to adopt a puppy/kitten/baby gorilla by the end of this article, but please make sure your significant other/landlord/baby gorilla that you got last summer is also down before you go through with it.

His favorite spot when traveling. - sirmakoto

Your honor, I propose a recess so my client can cry a little bit.

From what I could gather, the plaintiff's dog was stolen. The defendant claims that she bought the dog from someone. Judge Judy decided to bring the dog into the courtroom and let it decide. - [account deleted]

This cat's already got a leg up on all the dudes who graduate college and just have a bed, no frame, just a mattress.

Husband said he was going to make a bed frame. I thought it was for our new mattress... It was for the cat. - julcarls

Workout buddies can be very motivational.

My 90yo neighbor hasn’t walked her dog in years so I volunteered to do it for her. So proud of Buddy’s weight loss! - strikeoutsteph

My sister made a sweater for Spaghetti...I think he loves it. - Rancor_Emperor

"One day, all this will be yours."

My son has loved my cat since the day he was born. She tolerates that love in a way I never thought possible. - Queen_trash_mouth

This dog has more self-control than I do.

Every year this mama duck brings her babies to my house and I help her take care of them. This morning I opened my door to 13 new peeping fluff balls. - ivereadthings

Can you believe they don't charge extra for this?

Staying at an AirBnB and I woke up to their kitten this morning licking my face. Instant 5 star review. - Tan-zania

They're probably on their way to a Behemoth concert.

This is Ben. He has a beard. And he is human sized. We get fun looks in traffic. - TheGospelOfMark

Hey, you're pretty great too buddy.

When you get to bring your dog to work and she reminds you that you’re her favorite person. - LearnedBravery

"And where there was only one set of paw prints, that's when I was carrying you."

She's in love with the new tiny human. - D5R

The shame is palpable.

I haven't found what they broke yet. - operationnos

This has got to be a Guinness World Record, right?

This dog is asking the horse to be the best man at his wedding.

Friends come in all shapes and sizes. - Colar

This duck is asking the dog to be his duck son's godfather.

This cat is asking the pig to be its car.

The true meaning of a piggyback ride. - b12ftw

Hopefully, these two roommates are on the same page about who does dishes and when.

Perhaps this can finally end the crane-gosling war that has raged for generations.

"Excuse me human, I have a request. To what department might I submit it?"

Doggo's polite and subtle implication that he is interested in going for a walk. - TeisTom

My boyfriend ran into this little buddy here while hiking the Rocky Mountains. - pizzapuff93

I bet this cat was the most popular cat in its class growing up.

Beni is the most extroverted cat. He wants to be everyone’s friend. - appen11

I wish I had a friend that would give me a bath...

I want to go for a brisk autumn walk with this dog.

I take my dog to my store every day. One older Italian woman liked Bentley so much she came back and gave him a hat she knitted! - SEND_PICS

My sister's husky ran out of ink while giving birth. - r_gavin09

Did he bring a Hogwarts letter?

Woke up to this gorgeous one above my front door. - GodsFavoriteAngel

Too hot to play fetch outside, so how about a game of lazy fetch inside? - mac_is_crack

Dads, just stop complaining about getting cats. We all know you're gonna love them.

My Dad (79) went from “I don’t want that dang cat" to carrying her to “her room" for bed each night. - laurieatari

This dog is set to tame the old west.

I like to put hats on my grandparents dog, and she likes to wear them. - Magic

This cat looks like the dude just said something weird.

I had to babysit my daughters kitten and she requested proof that he was okay so I sent her this. - MacSteele13

Did she even ask the cat if it was okay to move out?

My cat Pepe loved my roomie, and she recently moved out. I’m not crying, you’re crying... - hopawfmahdiq

Hmm... and this just started happening after this man decided to leave his incredible fortune to the cat in his will...

A man said he couldn’t breathe when sleeping so he installed a camera to see why. - Climatechange17

This is Jax with his human. Jax is an akita, but due to a condition he was given a very special "mask." - Drown_In_The_Void

Let he who does not love scratches cast the first stone.

All redheads are friends with other all redheads. That's just how it is.

A year ago I posted this picture of my new puppy Marty. A year later Marty is doing just fine :) - weatherworn

This is Lupin. It's his first night with us and he thinks I'm his bed. - WaldoWhenWeNeedHim

Baby mouse hangin' on some orchids I found this morning. - TranquiloGuevon

The new semester has started, and he is ready for Chemistry lab. - ScarletNumeroo