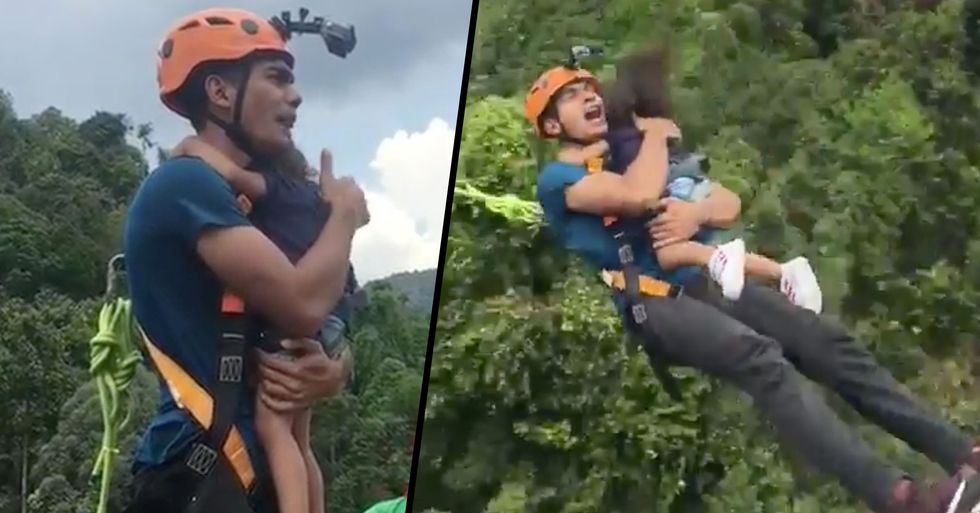 It seems to me that, when you become a parent, you go one of two ways...

You either want to wrap your 'lil baby in cotton wool and feed them only organic superfoods chewed first by your obliging husband... or you let them roam free, eating cheeseburgers from homeless people's backs, splashing in muddy puddles, and staying up late to watch re-runs of The Simpsons.

That's probably why shows like Wife Swap are so popular. We are fascinated with comparing the ways people bring up their kids. Is it that we're fascinated by child development, by social-economic factors that may affect parenting skills or ability, or is it that we just love to be nosey and judge people we don't know?

Ah, it's probably a bit of both, but, frankly, there's nothing wrong with a bit of healthy judging.

I'll tell you who has faced plenty of backlash this week for his apparent bad parenting: Malaysian reality TV star, Redha Rozlan.

Continue scrolling to read some of the hilarious comments from the viral video of Rozlan performing a bungee jump stunt with his little girl.

We'll let you decide for yourself whether this guy really is the worst of the worst...

The thirty-year-old certainly pushes his body to the limit, and this is something that he seems to encourage his young children to do, too.

Rozlan doesn't seem to be the kind of guy that feels like he has to act in a certain way now that he has kids. I mean, I can't see this guy picking up a briefcase and joining the slug of the 9 til 5.

Has she got a helmet?

Most of the pictures that Rozlan posts on his Instagram make it appear as though his young family has a great old time. However, there are a couple of photos that have people questioning how responsible he is as a father. I mean.. a toddler riding on the back of a motorcycle... in a spiderman cap?

As much as it seems like daddy is having fun...

What must his wife think?

A lot of people who watched the bungee jump video questioned what the reality star's wife must think. Many people considered that she must be furious at the danger her husband put their child in... by the looks of it, though, Rozlan's wife is just as big of a thrill seeker as her husband.

I mean, we can judge the Rozlans for pushing their kids to their limits, but surely it's good to encourage children to challenge themselves? Personally, I think that the family seems like a happy, healthy bunch that could teach the rest of us a thing or two.

Not that everyone sees it that way...

Plenty of people have condemned the parents for some of the activities that they have subjected their young children to. The bungee jump video has gone viral all over the world, with accusations flying about the Rozlan's parenting methods. Even this video posted by Redha Rozlan's wife has made people uncomfortable...

One parent who watched the bungee jump video considered the activity to be a great idea. They even suggested that they might take their kid for a birthday treat. The Facebook user responded to the video by saying: "My kid turns 2 today and I was struggling with ideas on what to do for their birthday - now I know!" Perhaps they were being sarcastic...

"Not everyone likes fishing."

This was perhaps my favorite response to the video. One Facebook user wrote: "Brilliant! Nice gentle drop and swing safe in the arms of her loving father, fun times, don't know what all the drama is about, it's not for everyone but then neither is fishing or tiddlywinks!..." I mean, I totally agree, I always hated fishing! Although, I'm not sure I'd want to do a bungee jump either...

Could the kid really have gotten PTSD?

One Facebook user warned that the bungee jump ride could have severely affected the child. They wrote: "I can't even look at this, it can't be real, surely. Someone needs to educate this parent on the impact of trauma to the brain. Just unreal." I mean, maybe she's got a point... But the Facebook user didn't stop there, she continued by saying: "Next he'll be wondering why she can't sleep, is having nightmares, anger outbursts etc etc, well 'top dad' she's exhibiting symptoms of PTSD! Congratulations." Yikes.

Part of the debate as to whether this was bad parenting or not occurred because no one could see the kid's safety harness. In the video, the dad holds tightly to the child and it sort of suggests that Rozlan is the only one with a harness. One Facebook user argues that "She's wearing that new improved transparent harness and safety gear. And he only looks like he's comforting a scared child he's really trying to calm down an over-excited one."  I guess we'll never know for sure!

Who was in charge here?

I mean, the bungee jump company, Rentas Adventures, should surely take some of the blame for what happened, right? One Facebook user made the good point: "Shouldn't there be an age limit?"

What's "shaken infant syndrome" when it's at home?

One alarmed Facebook user asked: "Did this not cause shaken infant syndrome?? How is the well being of the kid at the moment" From what we've seen on Rozlan's Instagram page, his kid looks fine, but I guess she could have been pretty shaken up...

Personally, I always loved it when my mom put her car through the automatic car wash, but I guess we're all different. One Facebook user spoke up about how they had traumatized their child by simply taking them through a car wash. They wrote: "I felt bad years ago when my kid was spooked going thru a car wash!" I'm not really sure how relevant this was to the situation with Rozlan's kid, but I guess that, if a kid can be spooked by a car wash, then a bungee jump really isn't a good idea.

I think some of the best responses to a story like this are the ones in which parents use what's happened as a way of proving that they're not so bad. I mean, there's no logic in thinking that, if another parent does something worse than you, all of your sins are eliminated. Take this example, for instance. One woman commented on the video saying: "I got put on the child abuse registry for giving my child a gentle bop on the head with her book. If this guy doesn't get at LEAST that plus all the b*llsh*t on parenting I had to do, then I call b*llsh*t on the whole system" A gentle bop to the head, eh? Right...

Throwing them in the air ain't so bad, right?

One dad commented saying: "Really puts into perspective how not bad throwing your kid a couple inches into the air is."

No you're bad parents for destroying the planet.

Removing the shade from the bad parenting of Rozlan were some climate protesting warriors. They commented on the video saying: "If you're so worried about our children then be mad and clean this planet up."

At least he's not an anti-vaxxer!

I mean, can anyone be considered a bad parent compared to those that decide not to get their kids vaccinated? One Facebook user made the perfectly valid point that the bungee jump incident was "still more responsible than anti-vaxxers."

A supporter of the toddler doing a bungee jump was a fellow bungee jump enthusiast. This guy commented on the video, writing: "I'm a semi-retired bungee jumper...... Start em young is what I say..."

Somebody needs to take their chill pill...

As much as there was a whole host of people going mad about Rozlan's parenting skills, there were also people who didn't see the problem. One guy commented saying: "It's fine jeez live a little."

If you didn't catch it on camera... did it even happen?

Nowadays we photograph everything. What we had for dinner, what we plan to wear, what our friends look like when they are asleep, what the street looks like in the rain... everything is documented. One commenter on the video made the point: "And that's exactly why you don't video sh*t!!" I guess, if no one had filmed it, there wouldn't have been such an uproar...

I was waiting for someone to bring it up!

As I trawled through the comments on this viral bungee jump video, all I could think about was "hey remember when Michael Jackson hung his baby out of the hotel window" and I'm happy to announce that someone else was thinking the exact same thing. One Facebook commenter said: "Was only a matter of time before someone upstaged Michael Jackson's hotel balcony stunt."

Do you think it's worse than Jacko's hanging Blanket out the window stunt?

Watch the video and judge for yourself. Personally, I don't think that either was that bad. I'm with the live and let live dude. I mean, my sister, Maisie, fell down a flight of stairs when she was a baby and she's... well, I mean, she's alright. If you want to read about other instances of "bad parenting" then keep scrolling! To be fair... some of these are actually pretty bad. They make bungee boy seem like Martha Stewart!