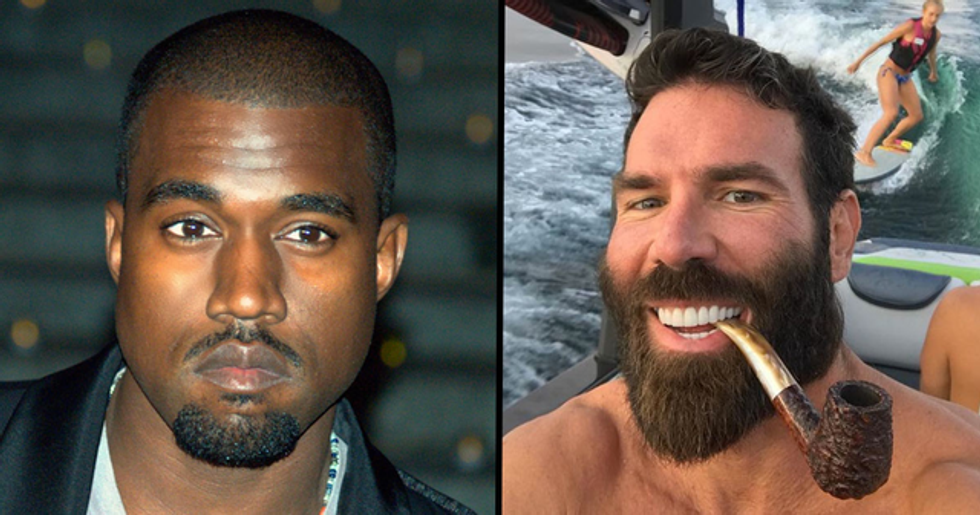 Ever since Donald Trump became president in 2016, our presidential elections have become somewhat of a circus show.

Trump has proved that our country doesn't require candidates with decent - or any, for that matter - political experience. All they need is a loyal fanbase and plenty of money.

There has been an influx of celebrity interest in the role of president in the last few years and, after showing his undying support for Trump, rapper Kanye West has famously been vowing to run for President for the last couple of years.

But now, he may have some bearded, gun-wielding competition.

The former professional poker player, Dan Bilzerian, who is also known for his lavish lifestyle of naked women and private yachts, has announced his plans to run alongside Kanye for the 2024 presidential spot.

Keep scrolling to hear what Bilzerian has said about his plans, and what his thoughts on a potential president Kanye are...

When Donald Trump became president in 2016, the world was left in shock.

Not only because the famously bigoted businessman from the 1980s was suddenly running the United States of America...

But because Donald Trump had pretty much no experience in politics.

Yes, Trump may have been quite the business tycoon, but that doesn't mean he had earnt any place in the political world.

But if you have money...

You can make pretty much anything happen, right?

And, since Trump's remarkable accomplishment...

More and more celebrities have been feeling rather inspired by the notion of being able to buy their way into the number one seat in the White House.

Kanye West is one of the higher profiles in the race to the White House.

The self-proclaimed "greatest artist of all time" has made his desires quite clear, and has repeatedly discussed his wish to run for president in 2024.

And he isn't taking this decision lightly.

Speaking at Fast Company’s Innovation Festival this month, the rapper was asked about his presidential plans, in which he said, “When I run for president in 2024 —" At this, however, there was laughter from the audience, to which Kanye responded, “What y’all laughing at?" He went on to explain that "if he were elected", he would "create so many jobs."

But, regardless of how confident the rapper seems, it seems now that 'Ye may have got himself a little competition...

The competition that seems to be constantly wielding machine guns, have an over-inflated ego, and a love for gambling and naked women, might I add.

But who exactly is Dan Bilzarian?

Well, describing Dan Bilzerian in just one sentence may be an impossible task. So... Here goes.

Bilzerian has made quite the name for himself.

Crowned the "King of Instagram" by his twenty-nine million dedicated followers, Dan Bilzerian has become famous for showcasing his lavish lifestyle of women, guns, private yachts, and a seemingly never-ending supply of cash.

Bilzerian kick-started his explosive career as a gambler.

Dan, originally from Tampa, Florida, primarily gained fame from playing poker. He has boasted on several occasions about his wins, claiming in 2013 that he won $10.8 million in one night, and over $50 million in just 2014.

Dan's Instagram account is overflowing with pictures and videos that demonstrate his lavish and somewhat over the top lifestyle - Naked women, private yachts, machine guns... You name it, Dan has it.

Of course, the gambler has come under fire many times...

Many have labeled Bilzerian as "sexist" with his exploitation and blatant objectification of women, and environmental activists have also criticized him for his over-use of private jets.

And, just to add the cherry on top of the icing, he's now wanting to run for president.

This man. Running our country. What could possibly go wrong?

He has recently opened up about his plan to take over the White House.

As the former professional poker player was leaving the STAPLES Center after watching the Logan Paul - KSI fight on Saturday, TMZ quizzed him about his previous remarks on wanting to be the next POTUS.

He was initially asked about his thoughts on Kanye running for president.

When asked to comment about West’s presidential plans, Bilzerian replied, "Better than Hillary." He then added, "I think he’s going to be running against me. We’ll see."

The reporter clarified further by asking again if he was definitely going to run in 2024.

But he seems rather confident in Kanye's chances...

Because, when asked if he would give Kanye a run for his money, he responded: "Yeah, but I hope I won't be running against him!"

You can watch the full interview here...

Though be warned, you may feel completely doomed about our country's future. To hear more about Dan Bilzerian, and the time he photoshopped Cardi B's figure, keep scrolling...