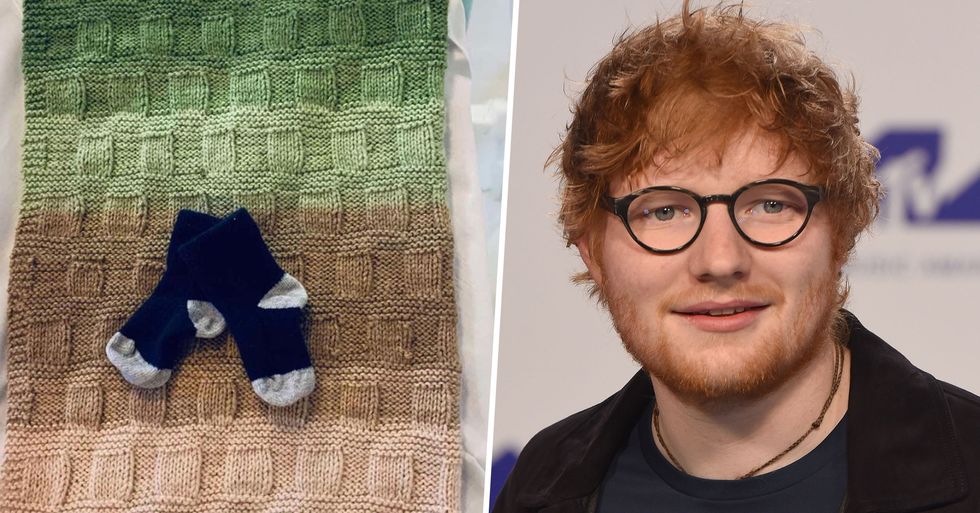 After a lot of drama surrounding the name Ed Sheeran has decided to give his newborn baby daughter, it turns out that the name has a very special meaning behind it, and fans are truly surprised at its origins...

Ed Sheeran is officially a dad!

The beloved English singer song-writer has announced yesterday that he and his wife have welcomed a daughter into the world.

Now, the "Shape of You" singer is notoriously private when it comes to his personal life...

But back in August, reports surfaced that Ed was expecting his first child with his wife, childhood friend, Cherry Seaborn.

The rumors were flying...

And, in typical Ed Sheeran fashion, fans were left waiting with bated breath for any confirmation of the pregnancy.

So, of course, people lost their minds when Ed took to Instagram to announce that Cherry had safely delivered a baby girl.

Sharing a photo of a multi-colored blanket and a pair of minuscule socks, the singer wrote: "Ello! A quick message from me as I have some personal news that I wanted to share with you... Last week, with the help of an amazing delivery team, Cherry gave birth to our beautiful and healthy daughter."

Well, it's certainly an unusual one, to say the least. Fans have been quick to criticize the quirky name choice but, now, an expert has come forward with a pretty eye-opening explanation. But he certainly isn't the first celeb to name their child something out of the ordinary...

Many still can't get their heads over the name!

But, putting the haters to one side...

It turns out that there's a very sweet meaning behind the quirky name.

Which, according to Ed, are the "best books I've ever read."

The books aren't to everyone's taste, we must say.

The award-winning fantasy trilogy sees teens Lyra Belacqua and Will Parry traverse parallel universes as they become embroiled in an epic war.

Fans were quick to pick up on the connection...

And now, it all makes perfect sense!

What a marvelous day for His Dark Materials fans!

Ed Sheeran had anbaby girl named Lyra Antarctica and I honestly didnt know there was anyone in the world that liked… https://t.co/lhAkrUwd4c
— 🚗lyn (@🚗lyn)1598963107.0

Let's be honest, we'd all do the same thing if we were hardcore fans... right?

For more baby name stories, keep on scrolling to find out the hilarious reason why Amy Schumer changed her baby boy's name...