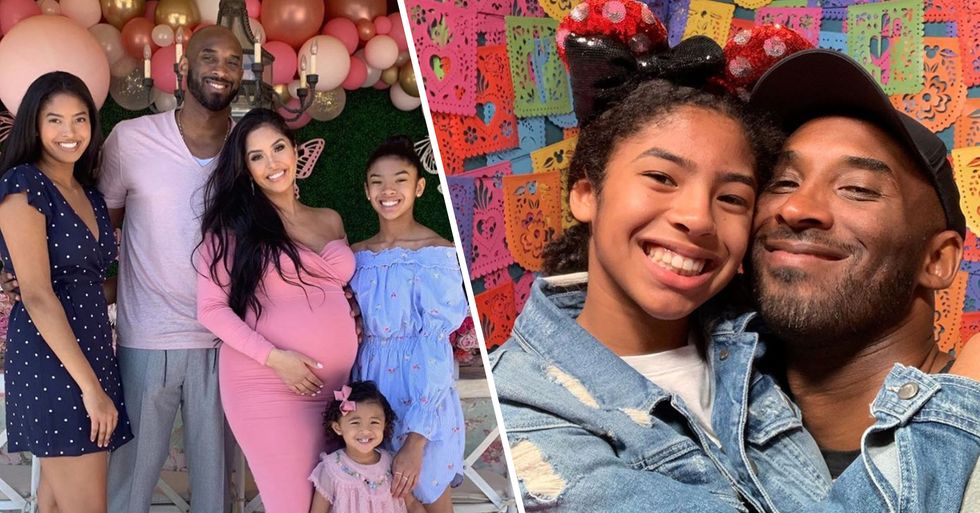 Scroll to the end to watch what one ESPN anchor said on SportsCenter and why this has inspired other "girl dads" to celebrate their daughters.

Gianna Bryant, aged only thirteen, passed away in the tragedy.

The world has gone into mourning...

Taking to Instagram, the prideful dad wrote: "We are so proud of you! From the classroom to the court. We love you more than you could ever imagine. #hardworkdreamwork."

In a 2019 interview with the Los Angeles Times, Kobe discussed how he would always choose his family over basketball. "I have a life and I have my routine at home... It’s not that I don’t want to go [to Lakers games] but I’d rather be giving [Bianka] a shower and sing Barney songs to her." "I want to make sure the days that I’m away from them are days that I absolutely have to be. I’d rather be with them than doing anything else."

Speaking to the Los Angeles Times in the same interview, the proud dad gushed: "What I love about Gigi is her curiosity about the game. She’s very curious. Even in a heated situation in a game where it’s going back and forth, she can detach herself and come to me and ask a very specific question, which is not common." "She’ll come over and say, ‘OK, on this particular trap when I’m trying to close the gap but she’s getting on the outside, do I need to change my angle?’ It’s a very specific question. That’s pretty damn cool."

"We try to teach the kids what excellence looks like. We try to give them a foundation for the amount of work that it takes to be excellent. Playing basketball, we’re going to focus on the details. We’re going to learn the basics, learn the fundamentals and do those things over and over."

Bryant was a proud "Girl Dad."

News anchor, Elle Duncan, broke down on SportsCenter as she talked about Bryant's love for his family.

Duncan began her anecdote by talking about the time she met Bryant backstage at an ESPN event.

She admitted she wanted "a picture "for the gram."'

However, when they first met, Bryant noticed something more important he had to discuss.

He began to pepper Duncan with endless questions about her pregnancy, including if she knew what the sex of the baby was.

She told him that she was having a girl.

Bryant was overjoyed, excitedly offered a high-five and said: "girls are the best."

She asked for his advice on raising girls.

His daughter Bianka was a year and a half at the time. He said, "Just be grateful that you’ve been given that gift because girls are amazing."

Duncan asked him if he wanted any more children.

He responded that his wife Vanessa wanted to try for a boy, but said "jokingly" that she was concerned it would be another girl.

She went on to ask what he thought of raising 4 girls.

"Without hesitation," he said he'd “have five more girls if I could. I’m a girl dad." Their youngest Capri was born in 2019.

Duncan began to choke up.

She said that Bryant began to talk about his daughters' athletic abilities. It's what he said about Gianna that made Duncan's voice shake.

“She’s a monster, a beast, she’s better than I was at her age on the basketball court," Duncan said Bryant told her.

With tears in her eyes, Duncan concluded, “When I reflect on the tragedy and the half an hour I spent with Kobe Bryant two years ago, I suppose the only small source of comfort for me is knowing he died doing what he loved the most. Being a dad. Being a girl dad." Keep scrolling to watch the emotional clip.

Duncan's touching anecdote has inspired other "girl dads" to celebrate their daughters.

People have been responding to Duncan's story with the hashtag #girldad, including many men who admit to being proud "girl dads" too.

Dads have been tweeting heartwarming messages dedicated to their daughters.

We're welling up just reading them.

For many, the Kobe Bryant tragedy has hit close to home.

"Love you Kobe miss you mamba."

Kobe's message resonated with many fathers.

Listening to Kobe's comments about being a father of girls resonates so much with me. Growing up I always thought "… https://t.co/Dxp3sbKVi2
— Tyran Ault (@Tyran Ault)1580228147.0

"I wouldn't change it for anything in the world."

The pictures are utterly adorable.

And the hashtag is filled with heartwarming messages.

This proud father gushed over his daughter in the tweet.

"Truly most important woman in my life. Proud of who she is and who she is becoming."

"The greatest gift any man could hope for."

This one hit us right in the feels.

This dad shared a touching message about his daughter, named Gianna, just like Kobe's.

This one is a real tear-jerker.

Another shared how he cherishes every day with his daughter.

He then gave a nod to the touching clip that inspired the trend.

Watch the emotional clip that sparked the #girldad trend below:

R.I.P to all those who died in Sunday's horrific tragedy. To read more on how fans are mourning the tragic loss of the victims, keep scrolling.