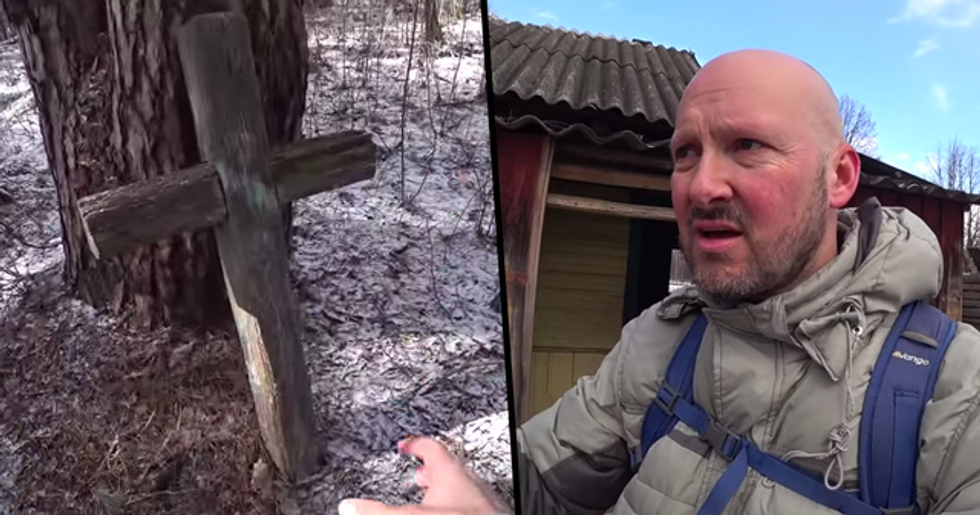 When most of us think of the Chernobyl disaster, our minds go to Pripyat, the ghost city in Northern Ukraine. The place was made famous after the nuclear explosion, and even offers tours for those chasing a morbid curiosity with the area. But many aren’t aware of what’s known as the “real Chernobyl zone” - across the border in Belarus.

Here, there are no tour guides and a real sense of a place abandoned by time. And one YouTuber decided that he wanted to explore, discovering something truly amazing in the process.

The Chernobyl nuclear explosion is one of the most famous disasters of all time.

In 1986, reactors at the Chernobyl Nuclear Power Plant near the city of Pripyat in the Ukraine broke down, causing an incredibly dangerous nuclear accident.

Since then, the site has gained infamy.

The fact that so many normal, everyday areas are now completely abandoned and left to go back to nature makes the ghost town seem super creepy.

In fact, Pripyat is almost something of a tourist spot.

Every year, many people flock to the area to take a look at one of the most bizarre cities on Earth.

But some people forget one thing.

In spite of the fact that the disaster occurred in closest proximity to Pripyat, it has much further-reaching consequences than many may expect.

Take a look at the map of the area.

You can see that the radioactivity actually spread out in all directions, and wasn’t just contained in the nearby areas.

In fact, there are many other areas affected by the disaster.

Many aren’t even aware that an entire country was impacted by the accident. Belarus, another former part of the USSR, suffered hugely at the hands of the Chernobyl accident.

But one vlogger wants to change all of that.

Bald & Bankrupt is a popular travel YouTuber, known for his unconventional destinations and out-there takes on visiting the world.

And, recently, one of his travel videos took the internet by storm.

In it, Bald & Bankrupt chooses to forgo the cliche decision of Pripyat, instead, opting to go and explore the Belarusian Chernobyl zone.

And what he found there was pretty incredible.

At first, it seemed like he was going to see much of the same sort of abandoned sites seen in the well known tours of Pripyat.

Although some of what he found was quite remarkable.

Including a room filled with graffiti from intruders over the past years - alongside these incredibly old images of past inhabitants.

But this wasn’t all that he found.

Because there were large expanses of Belarus without mandatory evacuation, there are a good amount of people who have chosen to stay in their homes - even years later.

The vlogger also came upon a sad scene.

He found a huge number of unmarked graves in the forest. Knowing that they wouldn’t have been visited for decades, he chose to take a drink and make a toast in their honor.

But then, Bald & Bankrupt noticed something remarkable.

He stumbled upon a lone inhabitant of the town, who was sat outside his home having a drink, and introduced himself as Igor.

Igor was super happy to see a new face.

And he was even happier once he discovered that the YouTube star had some vodka in his bag.

Igor then invited the vlogger inside his home.

And, unlike the vast majority of buildings that we see from within the Chernobyl disaster zone, Igor’s home is well preserved, colorful, and filled with cute ornaments and wall art.

Igor was also living with his mother, a ninety-two year old woman.

Bald & Bankrupt asked the pair about their experience of the disaster.

Igor revealed that, at the time of the explosion, the government attempted to pay off the inhabitants of his village to stay put.

The government’s story was a little sketchy.

Igor says that they claimed that it was totally safe for him and his mother to stay in their home - but, at the same time, they claimed that, just a few steps in any direction, were contaminated areas that were unsafe for human life.

The payments by the government have long since stopped.

And, even more shockingly, Igor claims that the entire village was kept in the dark about what had happened at Chernobyl for three entire days.

Then something really heartwarming happened.

Igor and his mother were quick to be hospitable to their guest. They opened their fridge, and, in spite of not having much inside, offered him a snack.

The YouTuber was clearly touched.

Although they appeared to have almost nothing, the pair were completely willing to share what they did have and the internet was blown away.

The pair had a can-do attitude.

Rather than feeling sorry for themselves after all they’d gone through, they instead just carried on, getting through their hardships as best they could.

She shared some of the major events of her long and fascinating life. Having lived through the Second World War, she then married and went on to have an incredible ten children.

After a few vodka shots, the vlogger left Igor and his mom.

But not before giving Igor a little cash, which was clearly something that he was in incredible need of. But the story doesn't stop there. What followed was even more heartwarming.

Here’s the full video from the vlogger's first trip.

It’s well worth a watch if you want to learn more about the Chernobyl nuclear disaster - in particular the aspects that aren’t seen on HBO.

Bald & Bankrupt was clearly touched by his experience.

So much so, in fact, that he decided that he didn’t want to end the tale of Igor and his mom there. So the YouTuber decided that he wanted to return for a second visit - first making a stop at the supermarket to stock up on groceries.

The vlogger also paid a visit to a nearby church.

The fact that some aspects of this village still seem to be living on, regardless of what happened there, is pretty unbelievable - not to mention inspiring.

Bald & Bankrupt then made moves towards Igor’s home.

On his way, though, he ran into another villager. Once the villager realized that there was vodka on offer, he decided to come along, too.

The two arrived and were met by Igor’s mom.

At first, she seemed a little confused as to who the vlogger was. But she then remembered and was thrilled to see her old pal.

She showed her signature hospitality.

And was quick to invite both Bald & Bankrupt and his villager friend inside her home - although perhaps the overflowing shopping bags affected her decision.

But she was absolutely overwhelmed by what he’d bought her.

The mother was incredibly touched that the vlogger had shown up with gifts - especially because it’s clear that she and her son get by on the bare minimum.

She also had a familiar response.

As she did in their first meeting, Igor’s mother was quick to offer her visitors snacks and drinks.

The elderly woman was also eager to trade the shopping haul for eggs, wanting to return the favor. The vlogger ended up leaving with an enourmous bag stuffed full of eggs, collected by the ninety-two years old.

The gang also shared some drinks.

Initially, the old woman was less keen to drink, claiming that she shouldn’t. But she soon got into the party spirit, offering a toast to the younger men.

She was also keen to make this a recurring visit.

We’d love to see what continues to happen to this extraordinary pair - and we hope that Bald & Bankrupt goes back and makes this into a series.

We hope that it’s going to be the second in a series of many. Learning more about people living in such different circumstances to our own can only serve to strengthen our humanity. And the internet thinks so, too.

The internet has gone wild for these videos.

The fact that these people were generous enough to share the little that they had has warmed the internet’s collective heart.

But that wasn’t all.

People also drew attention to how happy the pair seem to be to interact with a new person, depicting the importance of human interaction to every one of us.

While the two in these videos appear to be pretty isolated, it’s worth remembering that there are victims like them all across Belarus - and many of them have been all but forgotten about.

Either way, this is some of the best internet content that we’ve seen in a while.

It’s rare for a YouTube video to be, at the same time, heartwarming and informative, but this one totally achieves that. We’re just hoping to see more!