Heidi Klum Slays Halloween in the Most Epic, Outrageous Halloween Costumes of All Time | 22 Words 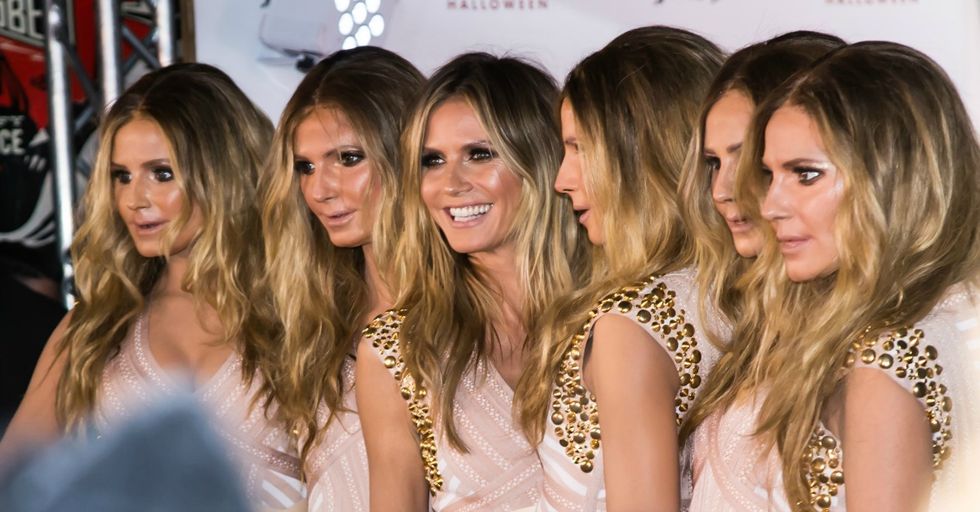 Heidi Klum Slays Halloween in the Most Epic, Outrageous Halloween Costumes of All Time

For most people, Halloween involves throwing on a half-hearted costume, drinking too much, and eating as much candy as a fourth grader consumes in a month.

But for Heidi Klum, Halloween is a sacred holiday where you truly do transform into whatever you want. And boy, does she BRING. IT. Keep reading to see her most outrageous costumes throughout the years.

Klum brought the iconic flapper to life down to the last detail. Although her dress and shoes were somewhat simple, it was the spot-on wig and makeup that pushed the transformation over the edge.

This is the type of crazy, over-the-top look that we've come to expect from her. The oversized apple costume, the giant snake, the killer makeup, the two-toned tights... it's Halloween Heidi at her finest. She also happened to be VERY pregnant, so the costume helped conceal her large belly.

It was Heidi's assistant who came up with the idea for this epic costume. "My husband and I were in India last year, so she said, 'Why don't you do an Indian goddess? Like a scary Indian goddess?' And I said OK!" Heidi told Cosmopolitan.

The stunning superhero/robot costume of 2010 was a total showstopper. She wore boots with built-in stilts, turning her 5'9" frame even more larger-than-life.

In 2011, Klum and then-husband Seal both dressed in shockingly realistic ape costumes. She later said the face and body make-up took over six hours to complete. This next one takes the cake, though...

Klum actually had two Halloween parties in 2011, and for the one she hosted in Las Vegas she wore a costume that she explained to People Magazine as "a dead body with the first layer of skin ripped off." "It's kind of like me naked."

In this promotional photo, Klum teased her Cleopatra costume that she planned to wear to the 2012 party. However, out of respect for the victims of Hurricane Sandy, she postponed the party.

In what many argue to be her best costume of all time, Klum portrayed an old woman for 2013's Halloween. "When I was a 95-year-old version of myself, I spent a lot of time getting the details right, down to the varicose veins and the eye lenses to make sure I had cataracts," she told the New York Post.

This over-the-top butterfly costume for 2014's party took five hours in the makeup chair. Klum told E! News that she chose this costume because "someone very close to my heart called me a schmetterling," which is the German term for a butterfly.

With spot-on accents and plenty of va-va-VOOM, Klum wowed as Jessica Rabbit in 2015. The transformation took ten hours, and the prosthetics on her chest and rear made her too large to fit into her car. But last year's costume will make your head spin...

Perhaps wanting a break from the countless hours spent in a makeup chair, Klum came up with the out-of-the-box idea (literally) of having five other "Heidi" clones for last year's Halloween. The six Heidi's arrived in a box with "Made in Germany" stamped across it. The five girls all wore facial prosthetics in order to look identical to the blonde stunner. Heidi's 2017 party will be held on October 31st, and we can't wait to see what she has in store for us this year!