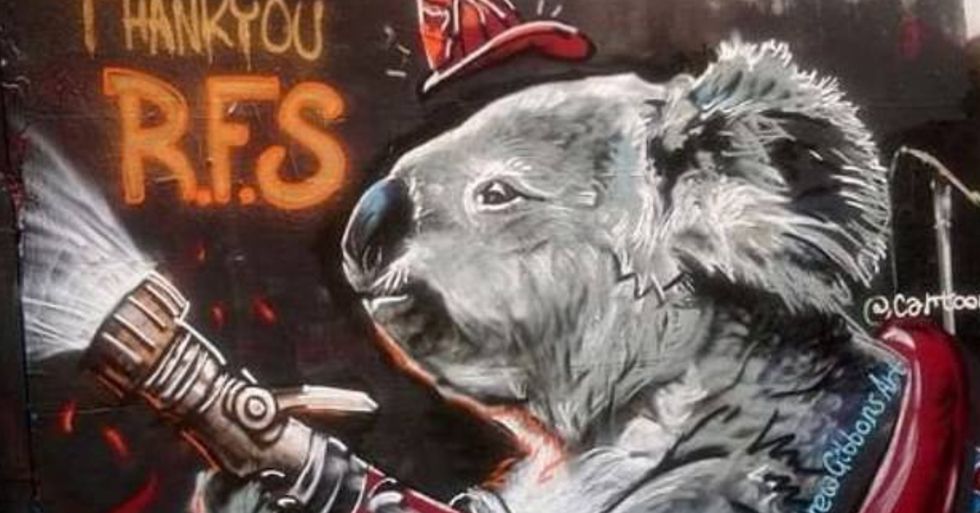 Keep scrolling to see a beautiful mural that has united the whole country during the disaster.

Last week, as firefighters from the U.S. arrived at Sydney airport, everyone had an amazing reaction to the team's arrival.

Let's just hope that all of the hard work and efforts of these amazing volunteers will eventually start to pay off.

Alongside the stellar work being done by the firefighters ...

Others are also doing what they can to help. And one tribute to the fire in Melbourne's famous Hosier Lane has really captured Australia's attention.

This is Andrew Gibbons.

The graffiti artist is based in Melbourne, and has been badly affected by the ongoing bushfire crisis.

He helped to organize a fundraising event.

"We got together to paint and raise money for bush fire recovery here in Australia. The support was great and what cant be done alone, maybe we can get done together."

And his final product has gained tons of positive feedback.

People are absolutely loving the mural and the message of hope it represents.

"Shout out to all the people facing the blaze and caring for the lives affected most Rural Fire Services in this instance was meant generally and not pertaining specifically to NSW registered fires. The money raised is all being passed on to the WWF wildlife recovery fund."

And that's not the only bushfire-inspired graffiti.

Although it's safe to say not all of it has been quite so heartwarming. Images of the bushfire truly depict the devastation wreaked. Keep scrolling for the most powerful photos from the crisis.