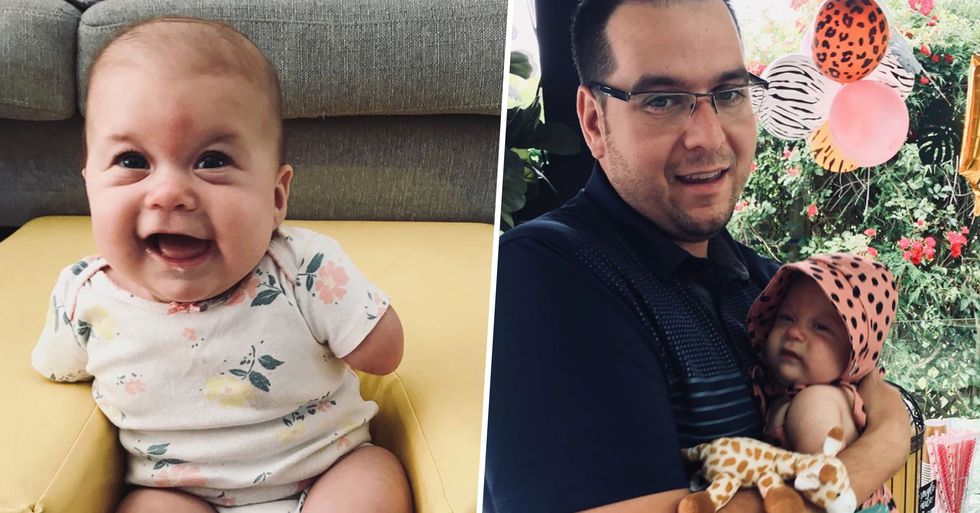 Parental instinct is a strong feeling for many parents, and it's one that kicks in even before birth.

This was especially so for one dad in particular, who after being told his baby girl was to be born with no arms, was determined to do whatever possible.

This is a real tear-jerker...

Becoming a parent is a gift.

It is something that will change your life.

From then on, there's someone else to love and look after.

Your duty is to protect them and ensure that they're ok.

It's a lot of responsibility.

But for most, parents thrive and natural instincts come in.

Just like one dad did when he found out that his baby girl would be born without arms.

He knew had to do whatever he could for her.

And that's exactly what he did...

...Despite all the doctor's concerns.

The whole thing is magical, and it truly releases the inner warriors in women after a grueling 9 months of pregnancy.

This can depend on the woman's genetics...

As well as her tolerance to pain, her body type, and even the size of the baby.

But, in some more severe instances...

Childbirth can bring with it many perilous complications.

Some women can experience a whole array of health issues during childbirth...

Meaning that, sadly, not every baby is born in good health.

Some babies are incredibly ill upon their arrival into the world...

And, in some extreme cases, they don't make it past being a few hours old.

But, thats not always the case.

Some babies are so keen for a taste of life that they go on to defy all the odds by surviving these incredibly traumatic deliveries.

But now, not all illnesses are discovered at birth.

With advances in technology, doctors are able to spot things that may be wrong during scans.

Just like they did for Vanessa McLeod and her baby girl.

Vanessa found out about her daughter's limbs when she was 19 weeks pregnant.

Whilst her husband was away for work, Vanessa had an ultrasound appointment which she attended with her mom and toddler.

In a post recalling it, Vanessa wrote "I remember that ultrasound took forever -- but the tech told me that the baby’s legs were crossed and in a difficult position to determine gender. I thought nothing of it. We all commented on her cute little toes and got pictures printed, and we didn’t even notice that there was no mention of her hands."

And the following day she had an appointment booked with her midwife.

But just an hour before the appointment, Vanessa received a phone call from the midwife explained that there were significant findings on the ultrasound.

"She said I should bring my husband with me, and that I should find someone to watch my 2-year-old daughter. Immediately my heart dropped into my stomach and the tears started falling. Something was terribly, horribly wrong, I just felt it. I called my mom, as my husband was still out of town, and she dropped everything to bring me to that appointment."

"From the moment my midwife called me, up until we arrived at her office, I don’t think I stopped crying. I was terrified I was going to lose this baby. As my mom and I sat in the parking lot of my midwife’s office, preparing to go in, my mom looked at me and said, "Vaness, whatever it is, we’ll get through it."

When they sat down with the midwife she went over the scan and explained that first of all there was a possibility of a cleft lip.

"This felt like a punch to the gut. It stole my breath. It keeled me over and the sobs tore out of me, and visions of my perfect little baby shattered. No hands? I had never heard of this. It wasn’t on my radar. It had never crossed my mind, never been a fleeting fear or worry. I had just assumed that she had all limbs, that all pieces were there. I was devastated. I didn’t know if this was something I could handle, I didn’t know if things would be okay.

"I do remember, in the quiet aftermath as we sat in that office, my dad saying to me, "She’s going to be a blessing to our family. I think our family needs someone like her. She is going to teach us so much."

After the appointment, Vanessa contacted her husband to tell him.

She explained that whilst she didn't remember much of the conversation, she remembered "the note of disbelief in his voice when he said, ‘What? No hands?"

Following that, the couple had time before they were referred to Vancouver Children’s Hospital, where Vanessa hoped she would receive some answers.

But instead, she felt more confused.

And for the first time, Vanessa was faced with the suggestion of termination by the doctors.

"I felt like the doctors were telling me that it was over. That her life wasn’t viable, that we had lost all hope of bringing home a baby. I was shocked when the doctor suggested we terminate. THAT had never crossed my mind, but here they were, offering it. When my husband and I started to express that we wanted to keep her, the medical geneticist said, briskly and brutally, "But think about her quality of life. She’s going to have no hands."

When the couple came back from the appointment, they had more questions than they went with.

She explained "They gave us a moment alone to talk about our options, and I remember feeling so much doubt. I’ve always been pro-choice, but knew I could never personally have an abortion. But in that moment, I felt doubt. The doctors had made me feel guilty for wanting to keep my baby, had made me doubt all my abilities as a mother to care for and nurture my baby. What kind of life would I be giving her? Would she really have no quality of life? But as we had a moment of privacy, I remember looking at my husband, having so many questions and no answers."

And it was with her husband next words that Vanessa knew what they should do.

And she went onto say "She was ours to love and protect, and we did already love her. And I knew, without a doubt, that with my husband by my side, we could do this.

"I had no idea what it would look like, but I knew this wasn’t the end. We declined an amniocentesis, as there was a risk of miscarriage. And we knew we wanted to keep her and didn’t want to add any further risks to my pregnancy."

After all the nerves, baby Ivy arrived 4 weeks early and healthy.

"The moment I birthed her and held her in my arms, I felt so much peace. And when she opened her eyes and looked at me for the very first time, I knew she was exactly where she was meant to be."

"Since coming home, Ivy has grown leaps and bounds and met all of her milestones on time so far."

Vanessa finished adding "I can’t imagine our family without Ivy. I can’t imagine her not being here. And I know that we’ll have enough love for her to make up for anything she’s lacking (although I don’t view it as her lacking anything at all!) And because she was born this way, I’ve been told that she won’t often feel that she’s missing anything. This is all she’ll ever know, and she’ll never know any different. She’ll never know what it’s like to have hands, so she won’t experience that feeling of "loss." She’ll grow and adapt and always have her own way of doing things."

"I feel so much hope for her future."