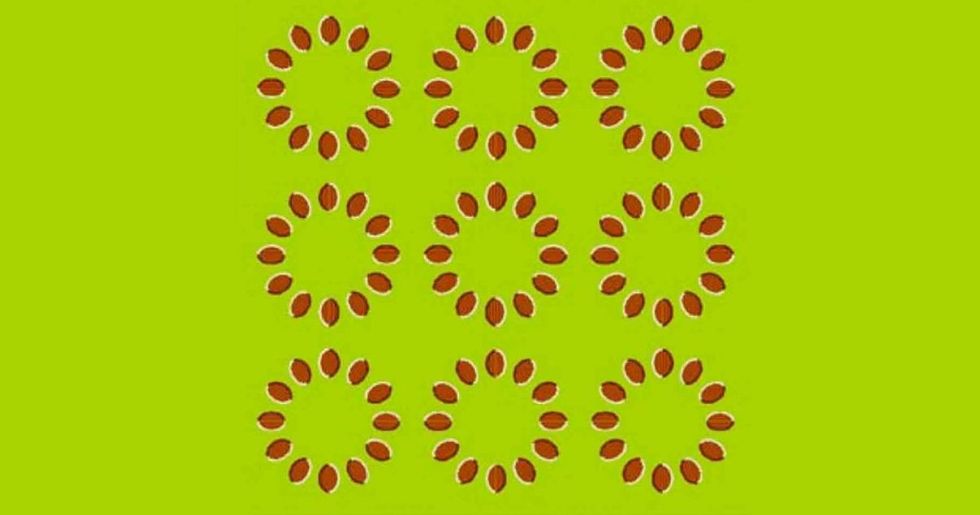 Do you have a mind for puzzles? Find out with a series of brain-teasers, riddles and optical illusions designed to give your brain a run for its money! After the optical illusions we've gathered, you might not believe your eyes—but rest assured, it'll be a fun experience.

We've compiled some of the most difficult puzzles from around the internet, and now you can find out how you measure up. Don't worry: if you get stumped, and really want the answer, we've got you covered. Try and solve these puzzles on your own, though, and don't forget to think outside the box!

What is the first thing you see?

More importantly, did you see a baby?

Are the two orange circles the same size?

These two orange circles are exactly the same size!

Are these circles static, or moving?

They appear to be moving—but are actually static.

Are these horizontal lines crooked, or straight?

The horizontal lines are in fact straight, even if they don’t look it!

Can you fit this fish in the fishbowl?

Try this! Stare at the fish’s middle yellow stripe for about 10 seconds, and then quickly look at the fishbowl.

How many legs on this elephant?

Despite the optical illusion, there is really only one proper leg attached!

Are the squares inside each blue and yellow square all the same color?

Answer: yes, they are the same color!

Question: Is the inner shape a real circle?

Here’s a hint: try blocking out some of the lines, as the extra information can distort your view. Answer: yes, they’re both true circles!

Try this optical illusion: which square (A or B) is darker?

It might seem normal, but look at it the right way up: Lincoln’s eyes are wrong!

Do you see anything at the intersection of the white lines?

There are no gray dots on this grid, but we tend to perceive them at the intersections!

Are both horizontal lines the same length?

They are indeed the same length, even though the bottom one seems longer.

In which direction is the bus traveling?

The funny thing is, if you asked a child in elementary school, they’d likely get it right! Answer: it’s going left, because you can’t see the door.

Which one of these is one continuous line?

One of these spirals is formed by a single piece of rope, tied together at its ends. The other is made with two different pieces of rope, each one joined at the ends. Which is the single rope? Answer: it’s A!

Figure out this visual riddle!

Hint: examine the problem from all angles. Answer: the number would be 87—we’re looking at the picture upside down!

The answer to this puzzle baffles most people…

Answer: Take careful note of every possible way to make a square in this picture. There are actually 40 of them!

Count the number of F’s in the following sentence:

Finished files are the result of years of scientific study combined with the experience of years. How many did you find? Many people forget to count the word “of." There are 6 in total!

What number should go in the empty triangle?

Answer: the pattern for each is as follows: take the top number on the triangle, subtract the bottom left number from that, and multiply the answer by the bottom right number. That number goes inside the triple. In the case of the empty triangle, the answer is 3!

See if you can crack this riddle:

Riddle: What building has the most stories?

You're escaping a labyrinth, and there are three doors in front of you. The door on the left leads to a raging inferno. The door in the center leads to a deadly assassin. The door on the right leads to a lion that hasn't eaten in three months. Which door do you choose? Answer: Lions can’t survive for 3 months without food. That door is definitely the safest bet.

Which direction is the dancer spinning?

This brain teaser may stump you:

A man stands on one side of a river, his dog on the other. The man calls his dog, who immediately crosses the river without getting wet and without using a bridge or a boat. How did the dog do it? Answer: the river was frozen!

Answer: It contains each single-digit number, zero through nine, in alphabetical order.

Riddle: If I am holding a bee, what do I have in my eye?

Answer: Beauty. This is a play on words. Ever heard ‘beauty is in the eye of the beholder?’ In this riddle, you’re the bee-holder, with beauty in your eye.

Riddle: Turn me on my side and I am everything. Cut me in half and I am nothing. What am I?

Answer: the number 8. Why? On its side, 8 looks like the infinity symbol. Cut that in half, and you have two zeroes.

How about this riddle?

You're in a dark room with a candle, a wood stove, and a gas lamp. You only have one match, so what do you light first? Answer: the match!

Can you find all six hidden words in this optical illusion?

There’s ‘slide’ and ‘water’ in the trees, ‘wet’ in the yellow bathing suit, ‘float’ on the rubber ring, and ‘pool’ and ‘swim’ in the water.

If you have me, you want to share me. If you share me, you don't have me. What am I? Answer: a secret! Share this post and tease your friends with these tricky brain-twisters!
20%