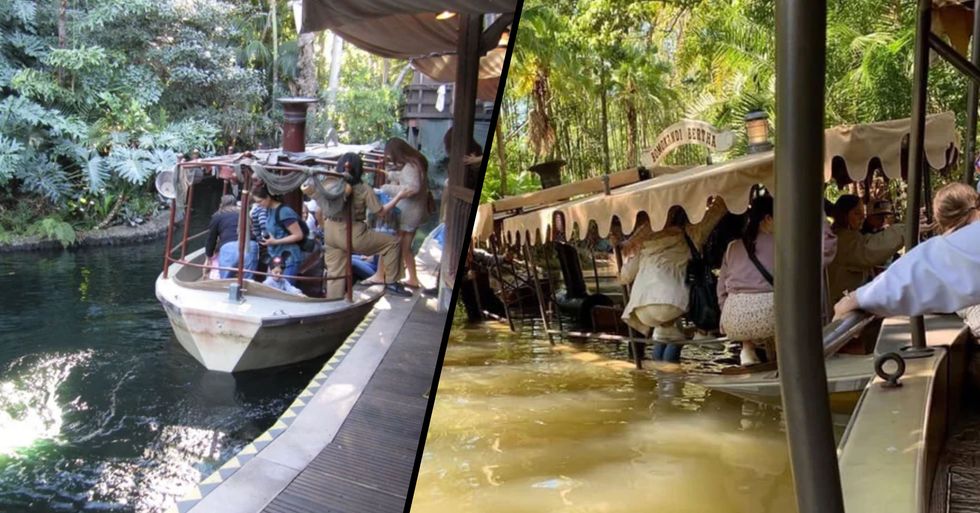 Jungle Cruise Boat at Disney World Sinks With Passengers on Board

A day out at Disney World is usually expected to be nothing but magical.

But visitors recently found this certainly wasn't the case when the Jungle Cruise Boat attraction at the Magic Kingdom park began to sink with all passengers on board.

Keep scrolling to learn more about this story...

The Florida resort was founded in 1971 and it has proven to be one of the most popular Disney resorts in the world.

The resort stretches for over twenty-five acres...

And since the resort opened...

The Florida parks have received over 600 million guests.

That Disney World always lives up to its incredibly high expectations.

Whether you like rollercoasters or eating your body weight in cotton candy...

Disney World has something for everyone.

But it seems that Disney World wasn't as magical as it normally was this week...

And several visitors were left stranded in the most peculiar way.

It happened at the Magic Kingdom theme park...

And it involved the Jungle Cruise boat ride.

The boat ride is a timeless family-friendly experience...

The ride takes passengers on an adventure through the world's exotic rivers with a humorous skipper as the guide... in classic Disney fashion, of course!

But yesterday on February 27th...

The boats slowly started filling up with water with passengers still on board.

Matthew Vince, who was onboard one of the boats, said that more than a foot of water flooded the boat...

Speaking to CNN, he explained how the boat "went from floating to sunk in about a minute."

Nobody was hurt and all passengers were eventually rescued from the half-sunken boats.

As a precaution, the fire service attended the scene...

Firefighters with the Reedy Creek Fire Department responded to the scene, but no one was transported to the hospital, a spokeswoman with the department also told CNN.

This isn't exactly what one would expect from Disney World...

A spokesperson for Disney confirmed to CNN affiliate WFTV that the boat took on some water, but added that everyone was able to get off the boat safely.

Of course, with the boat ride being a popular attraction since it opened in the 70s...

Many felt that the whole thing was a stunt...

Dwayne Johnson is set to star in the upcoming Disney movie, Jungle Cruise, and many felt it was a pretty obvious marketing tactic.

The ride re-opened a couple of hours later...

Showing that no real danger was posed, and Disney made sure the guests affected thoroughly enjoyed the rest of their visit.

Thank goodness for that!

For more on Disney World, keep scrolling to learn about the private resort that is being built in the Bahamas...