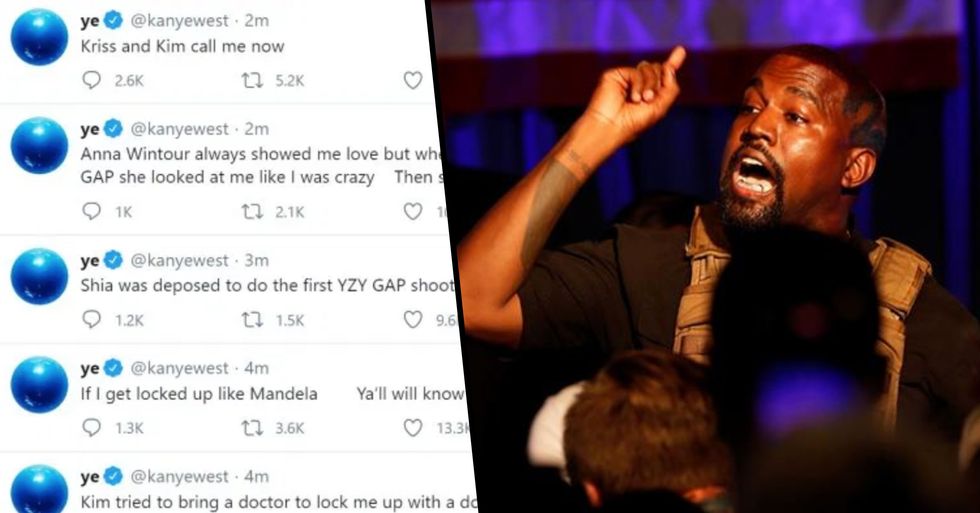 After his erratic campaign performance, it seems as though his marriage and family are on the line, as Kim Kardashian has been left utterly humiliated by her husband. And now, as people are trying to get to him, he has gone on a disgusting Twitter rant in which he has insulted his wife, her family, and his own kids.

Keep scrolling for all the horrible screenshots of the now-deleted tweets.

I mean, who would be after their husband completely humiliated them and not just once. And things have just gotten worse as Kanye has now gone on a disgusting Twitter rant...

We couldn't believe what we were hearing. Read on to find out exactly what he said about her and his own kids in his latest Twitter rant.

It turns out that Kim is absolutely furious with her husband for his antics at the South Carolina rally because her love for her kids is her number one priority.

So furious that she went to go and collect him from Wyoming. An insider even revealed that their marriage was "breaking down" in a matter of days.

But just when you thought things couldn't get any worse, here we are.

Kanye recently went on a horrendous Twitter rant in which he insulted his wife and in turn, his kids. He even tweeted about Drake and Shia... as in Shia Le Boeuf?

And honestly, "shocking" isn't even the word to describe what he's done.

He then went onto post a photograph of his kids and a Playboy shoot?

Kanye wrote this: "West children will never do Playboy... West." I wish someone could have been able to get to him and calm him down, because he seems to really be going through some stuff.

But he continued... And this is where s*** literally hits the fan.

Firstly, he refers to his own wife as "North's mom," which is shocking enough already and then talks about her sex tape, calling it a "sex rape." Now if there's any line to be crossed, he already crossed it earlier, but this is utterly disgusting. I can't even make sense of what I'm gathering from all of this.

He then threatened Kris Jenner (Kim's mom) in another tweet:

And of course, he had to talk about why his wife was so furious with him.

And then strangely referred to Bill Cosby, a convicted sex offender. Now, that's just something else altogether.

So, just to sum things up:

He told us Kim and Kris are trying to "lock him up," his kids aren't going to be on the cover of Playboy, his wife was allegedly "raped" when that wasn't the case, he almost "killed" North West, something about Drake and that they're going to do to him what they did to Bill Cosby?

I just hope that Kanye West gets the help he needs.