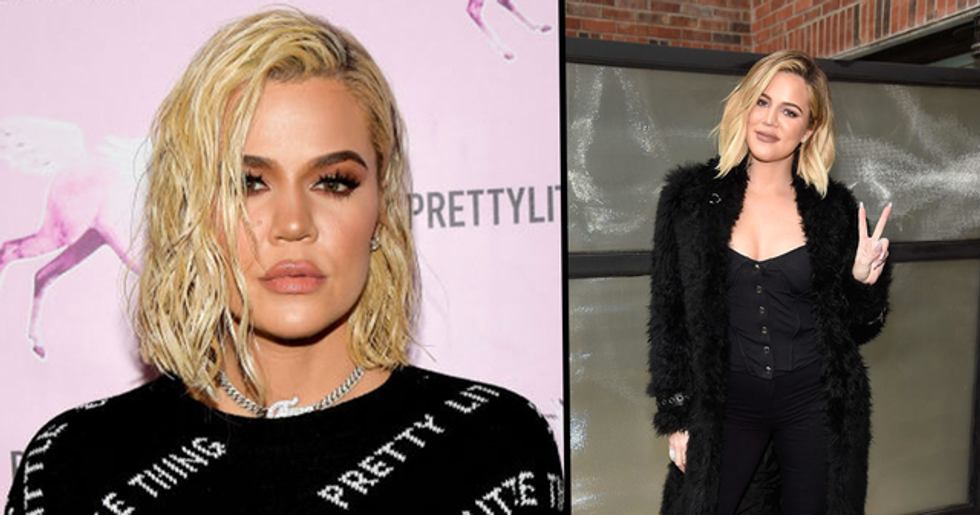 Another day, another Kardashian scandal.

The Kardashians are perhaps the most scrutinized and gossiped-about family in the world, with every aspect of their lives documented and monitored by both the press and the public. And, let's be real, we certainly wouldn't be living in the year 2019 without a daily dose of Kardashian gossip, would we?

But there's one Kardashian who has been making headlines more often than usual this year, and that's Khloe. The middle child of the family, Khloe has been somewhat overshadowed by sisters Kim, Kourtney, Kendall, and Kylie in the past.

Poor Khole's turbulent love life is more often than not the topic of conversation when it comes to this Kardashian sister, but, in recent months, her appearance has been causing a little confusion... Basically, she looks completely different nowadays.

A recent Instagram post has sent the internet into a frenzy, with some people saying that she looks completely unrecognizable. Keep reading to see the post in question... Surely this can't be her...

Khloe hasn't always been the most popular Kardashian.

Sorry to be savage, Khlo. Though, let's face it, being a part of the most famous family in the world was never going to be plain sailing; there was always going to be the favorites and the least-favorites.

We have watched the family grow on Keeping Up with the Kardashians.

The show premiered in 2007 and has since catapulted the family to ridiculous levels of fame. For over a decade, we have watched the ins and the outs of their daily lives.

The Kardashian sisters all have their "thing."

Kim has her sex tape (though I'm not sure how proud I'd be of that...) and her beauty line, KKW Beauty; Kourtney has always been known as the "down-to-earth mom" type; Kylie is popular for being the youngest "self-made" billionaire (again, questionable...); and Kendal has grown to become one of the best-known models in the world. So what about Khloe?

Sadly for Khloe, her thing has become her taste in men.

It's never been a great flavor, to say the least. Though Khloe has dabbled in her own projects, including her own fashion line, Good American, and brief TV talk show, Kocktails with Khloe, the most talked-about thing about the star has usually been her relationship dramas.

She hasn't had the best of luck in love.

We actually feel pretty sorry for poor Khloe. She has had two majorly publicized relationships that both ended messily. Though, let's be real, having a relationship that's so heavily documented is bound to cause a strain, isn't it?

To start, there was Lamar Odom.

Ah, we all remember this fiasco, don't we? Khloe famously married the basketball player in 2009, after only a month of dating.

But there was trouble in paradise...

After only a year of marriage, it didn't take long for the cheating rumors to start circulating. On top of all that, Lamar was also going through several problems with addiction.

There were some scary moments for Khloe.

We all remember the shocking reports coming in of Lamar "threatening to kill" his wife while high on drugs. Lamar had flown into a paranoid rage and was smashing walls with a golf club to "destroy the hidden microphones." When Khloe intervened, he pinned her by her shoulders and threatened to kill her.

And there was the incident with the stripper...

Lamar claimed in his autobiography that, after finding him surrounded by drugs and naked women in a hotel room, Khloe flew into a rage and started "beating up" one of his mistresses. A kind of reasonable reaction, if you ask me...

The pair officially divorced in 2016.

Though they split in 2013, Khloe spent the next couple of years supporting Lamar through rehab, pushing back their divorce until 2016. After all that drama, surely Khloe's luck was about to change?

Shortly after her divorce, Khloe started dating another basketball player. This guy went by the name Tristan Thompson. And, at first, it was nice to see Khloe so happy again.

But history began repeating itself.

It's all sounding a little too familiar, isn't it? Like clockwork, those cheating rumors began circulating... Again.

And to make things more complicated for the star...

She fell pregnant. Khloe had famously struggled with fertility during her marriage to Lamar, so this was fantastic news. It just wasn't great timing with her relationship issues...

Even the birth of their baby didn't help...

You definitely lived under a rock if you didn't hear about the cheating rumors between Tristan and Kylie's BFF, Jordyn Woods. Which, by the way, happened a mere months after the arrival of Kourtney and Tristan's baby, True. Long story short, the pair were rumored to have been getting a little too close at a party, prompting Khloe to give single mom life a go.

It's enough to turn any woman crazy, isn't it? Though Khloe has seemed to hold it together amazingly, her dramatically-changing appearance hasn't gone unnoticed.

Khloe's image has changed drastically over the past few years.

Eagle-eyed Kardashian fans have been noticing a change in Khloe's body and face as she becomes aesthetically more similar to her sisters, Kim and Kylie.

Khloe has always been the Kardashian with the unique look.

Despite the other sisters sharing similar features, Khloe has always looked slightly different from her siblings. However, she has become increasingly more similar to the other girls, especially her youngest sister, Kylie. In typical Kardashian-Jenner style, her face has become slimmer, her hair has become blonder and, of course, her ass has become bigger.

It's undeniable that the girl has been working out. Her figure is better than ever before, though she did face some criticism for her advertisement for a potentially harmful "flat tummy" slimming product.

Though there's one thing that exercise doesn't usually change...

Your nose. Yep, no matter how many squats and burpees you put yourself through, there's no changing the size and the shape of your nose.

And Khloe's nose has been the subject of great scrutiny lately...

It doesn't take a genius to see that her nose has shrunk drastically in the past few years. I mean, just look at it.

Last month, Khloe appeared on Laura Wassar's podcast Divorce Sucks!, and she discussed her relationships with exes, Lamar Odom and Tristan Thompson. However, all people could notice was her nose, which appeared much smaller and more upturned than usual.

But Khloe continuously denies having any cosmetic surgery.

Despite the mysterious shrinkage of Khloe's nose, she remains adamant to this day that she hasn't had a nose job.

She blames her change of appearance on...

Makeup. Yep, her contouring skills are now advanced enough to change the complete shape and size of her nose... apparently. If she could teach me a thing or two, that'd be fab.

She claims that she is too afraid to go under the knife.

Speaking in an interview last year, Khloe admitted her desire for a nose job, but also said that she is too scared of surgery right now, "One day, I think I’ll get one because I think about it every day. But I’m scared, so for now, it’s all about contour."

However, a new selfie has spurred the rumors even more...

Khloe should have saved her breath. Even though people have been speculating Khloe's "au naturel-ness" for some time now, her most recent selfie, which was uploaded last week, has sent everyone into a complete meltdown.

Ladies and Gents, here it is.

Sporting platinum blonde hair, people had to do a double-take to see whether this was actually Khloe or her sister, Kim. It's undeniable - she is literally unrecognizable.

And for a quick comparison...

I thought I'd throw a vintage Khloe in here, for good measure and all that. Though a big part of her new look is thanks to her weight loss (bravo, by the way), it is undeniable that her face has gone through some major changes.

Her followers were quick to notice her extreme new look.

And, because it's the internet, people didn't hold back.

Though some people sympathized with the star.

Many people were quick to jump to Khloe's defense, however, saying that it's sad to see someone so obviously insecure about their image. This Twitter0user went as far as to say that her mom, Kris Jenner, is to blame for Khloe's self-esteem issues.

And even if she has had surgery, good for her. Though there was nothing wrong with Khloe's natural appearance, she should do what makes her happy, not her fans. People have been quick to slate Khloe, but it is easy to forget how difficult it can be to have your life constantly watched and scrutinized. She's had a rough few years, to say the least, and I only hope that this year can bring her some true happiness... Nose job or no nose job.