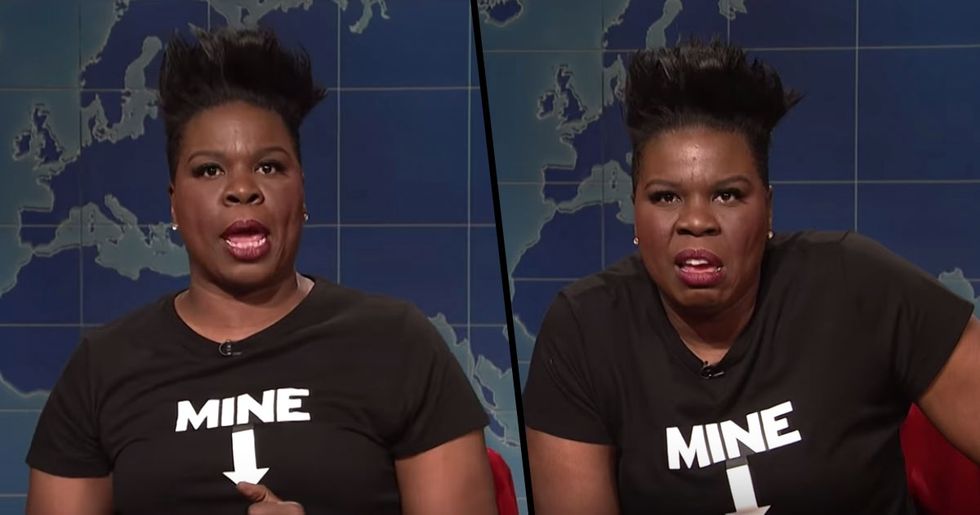 You've probably already heard about the controversial bill that has now been signed into law in Alabama that will ban abortion with very few exceptions.

People all over the US (and all over the world) have already spoken out against the ban. One of the most recent big names to do so is SNL's Leslie Jones. Keep reading to hear all she had to say about the bill.

The states in question are Alabama, Arkansas, Georgia, Kentucky, Mississippi, Missouri, Ohio, and Utah. All have passed laws that are heavily restrictive on abortion.

Many of them have passed so-called "heartbeat" bills.

These bills ban abortion as early as 6 weeks into a pregnancy, which, as many critics have pointed out, is only a 2-week late period; long before most people are aware that they're pregnant.

But Alabama has passed a near-total ban on abortion.

This will make abortion illegal at any stage of pregnancy, with the only exception being cases wherein the mother's life is at risk and abortion is the only option.

It's the most restrictive abortion law in US history.

Up until this point, abortion has been legal to some degree in all fifty states. So these laws, if allowed to go ahead, will mark a huge change.

The lack of exceptions has been greatly criticized.

Under the Alabama abortion ban, abortion won't even be allowed in cases of rape or incest, even though both scenarios would have a significant impact on the resulting child.

But the law was approved by the House, Senate, and Governor.

It was signed by Governor Kay Ivey on Wednesday May 15 and could punish any doctors who perform abortions with life in prison.

But it's a direct challenge of Roe v Wade.

Roe v Wade was a Supreme Court decision made specifically to protect Americans from legislation such as this.

The original decision was made in 1973.

It provides a fundamental right to privacy and choice and rules that all Americans have the right to obtain an abortion. Obviously, the ban is in conflict with this.

But the aim is to have Roe v Wade overturned.

Because of the conflict, the bills will have to be challenged in court and may even make it in front of the Supreme Court, providing the chance to revisit the decision and overturn it.

It's already an issue for the 2020 Presidential campaign.

Vice President Mike Pence has voiced his approval of the abortion laws and this may become a central issue in the presidential race next year.

But banning abortion won't stop it from happening.

It will just increase the number of unsafe abortions taking place meaning that Alabama's abortion law could actually put women's lives at risk.

And abortion is already the lowest it's been in a long time.

The abortion rate in the US decreased by 26% between 2006 and 2015, an all-time low for the country, all while abortion was legal.

So the reason for this drop is not due to restrictions.

In fact, the reason that abortion rates are lower is because access to contraception has improved. Abortion is usually a last resort, so when alternatives are easily available, it's not needed.

Plus, the majority of people who have abortions already have children.

This dispels the myth that anyone who has an abortion must hate kids. In most cases, these people are living below the poverty line and simply can't afford another addition to their family.

Currently, the majority of abortions occur in early pregnancy.

Later abortions (after twenty weeks) are usually only performed due to serious fetal abnormality which would affect the viability of the pregnancy. It's not a decision that people take lightly.

The law could also impact victims of domestic violence.

Some abusers deliberately impregnate their victim, by controlling access to contraception, to lock them into the relationship and prevent them from leaving. Sometimes, the only safe option is to seek out an abortion in secret, so the law could leave victims in danger.

Some women have been sharing their stories.

Many of them are heartbreaking, to say the least. They highlight how important it is that people have access to safe abortions.

The law has not yet taken effect.

Even though Governor Ivey has signed the bill into law, abortion is still legal at this time. And the law is likely to be challenged.

It has been widely criticized all across social media and, offline, people have been protesting the bill in large numbers as well.

It's even been criticized by conservative televangelist, Pat Robertson.

A number of celebrities have also spoken out.

Among them was Busy Philipps, who started the hashtag #YouKnowMe for women to share their stories of abortion without shame or stigma.

And Leslie Jones of Saturday Night Live also had something to say.

She hit out against the abortion ban on SNL's Weekend Update on Saturday in a 4 minute segment.

She began the segment in an outfit inspired by the Handmaid's Tale.

The Handmaid's Tale is, of course, a dystopian story wherein women are subjugated and the fertile are forced to bear children.

But she soon dropped that get-up to reveal her true feelings about the issue.

Underneath the red cloak, she wore a black t-shirt emblazoned with the word "MINE" with a downward pointing arrow. Very clear and to the point.

And she didn't hold back.

Jones highlighted the fact that all twenty-five of the Alabama Senators who voted in favor of the ban were white men.

And that wasn't the end of it.

She questioned why so many men are invested in what women do with their bodies and why they try to police their decisions.

And she had a special message for the Senators.

"You can't control women," she said, to cheers from the audience. "Because I don't know if ya'll heard, but women are the same as humans."

She criticized the female Alabama Governor for going along with the ban.

Governor Ivey has said that the ban shows that Alabama values the sanctity of life, but many people are shocked that a woman would police other women's bodies rather than protect their rights.

Jones made one thing perfectly clear.

"When women have choice, women have freedom." The Alabama law is a restriction on both choice and freedom, with no similar restrictions enforced on men's bodies.

Check out the video for yourself.

Despite the serious and controversial nature of this subject, Jones managed to insert humor in the right places. Her speech is well worth a watch.