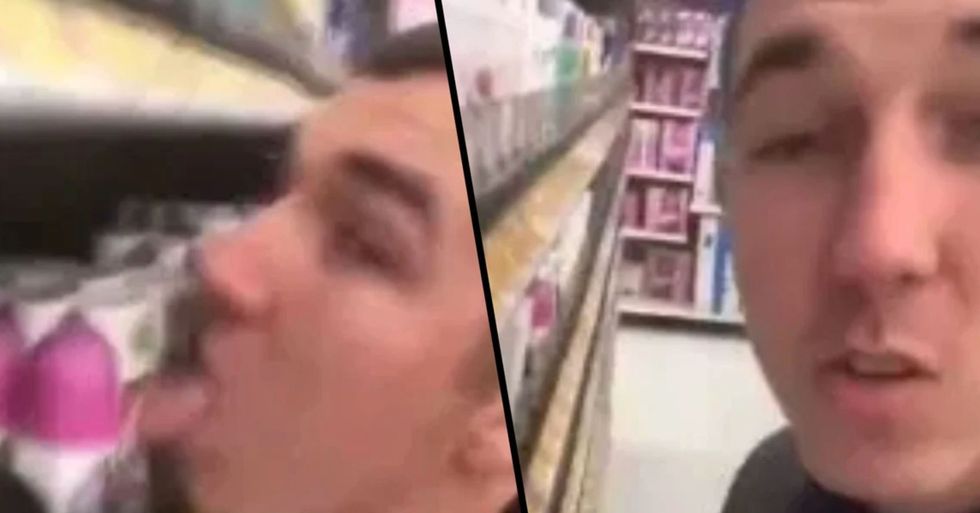 Man Who Licked Products in Store Arrested on Terror Charges

This week, horrifying footage of a man licking products in his local Walmart went viral, repulsing thousands of people all over the world.

But now, after endless calls for the man to be arrested, police have confirmed that they have indeed identified the young man in question, and have taken action.

Keep scrolling to read the full story, and to hear the consequences the culprit is currently facing...

COVID-19 has been spreading around the globe at an unprecedented rate.

It has been confirmed by Worldometer that 18,957 people have now died globally. A further 425,987 people have been found to carry the virus and be infected.

A man, who is believed to be from Missouri, has sparked outrage after he filmed himself doing something pretty disgusting in his local supermarket.

The video has the caption, "I'm a nasty moths f*****" and he is heard saying, "Who's scared of coronavirus" before licking the toiletries on the shelf.

"He should be arrested. Family have young children that are poorly. Adults that's are fighting their own fight with health. Pregnant women. Elderly vulnerable people. He should absolutely be arrested," one social media user wrote.

"The world has too many idiots and it will always be the same situation. It's absolutely nothing we can do about it," another wrote.

Some famous faces have even weighed in on the horrifying act...

British TV presenter and journalist, Piers Morgan, shared the video himself, branding the man as "disgusting" and insisting that, when he's caught, he should be "arrested, imprisoned, and denied any healthcare."

Since the footage went viral, police have been working hard at tracking the young man down.

Montgomery City Police Department released a statement that informed residents that they were aware of the video circulating the internet, and were doing everything in their power to identify the man in the video.

But now, it seems that their hard work has paid off.

Police in Warrenton, Virginia, has reportedly arrested a twenty-six-year-old man and have charged him with making a terrorist threat.

The suspect has been identified as Cody Pfister...

And, in a statement, the police department said: "A local resident who took a video of themselves licking the merchandise after making a 'Corona Virus' statement at Walmart and posting it to social media has been taken into custody."

Terror charges are in talks.

The statement continues: "Charges with Warren Co. DA are pending. The police department confirmed the man was a local resident and said he was 'making a coronavirus statement' and had been taken into custody."

Let's hope that his arrest stands as a poignant reminder...

That this COVID-19 pandemic is real, and not something to be taken lightly. For more on the ongoing crisis, keep scrolling to hear why Kylie Jenner has been strongly criticized for her response...