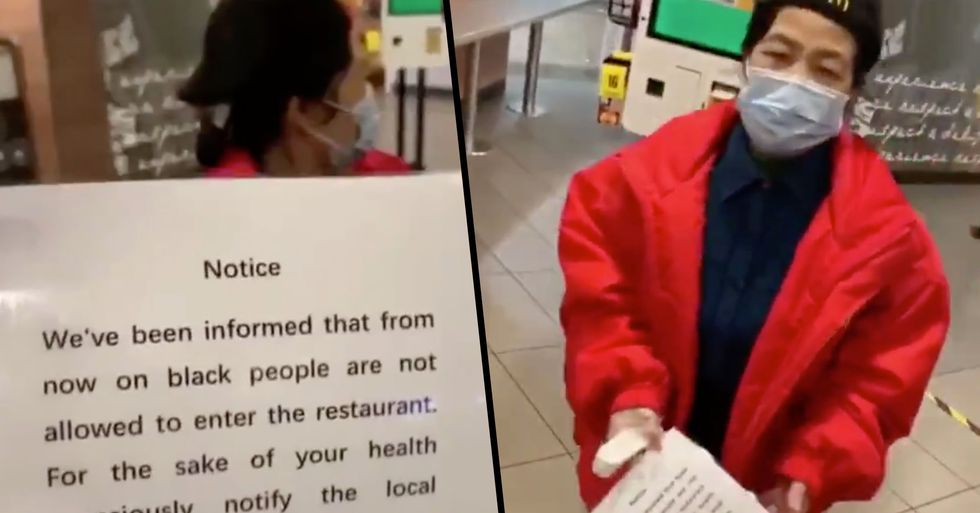 China has experienced a lot of negative media coverage over the past few months, and unfortunately, it looks set to continue.

As China prepares to lift all lockdown precautions, a new viral video has surfaced showing a sign which bans black people from entering a McDonald's.

This footage has left viewers shocked, and now McDonald's has finally responded...

China has recently been sitting in the hot seat for a while now.

And over the past few months, negative press surrounding the country has soared.

China has come under fire previously...

The country's treatment of the Uighur Muslim community has been viewed by some as discriminatory.

And it is not just this minority group that has been treated differently.

It seems now, things have taken a turn for the worse for other minority groups.

A shocking video has been taking over the internet which has led to a burst of outrage.

As lockdown measures are being slowly lifted throughout the country, people are trying to go back to their daily lives. However, it seems a discriminatory myth has emerged, effecting black people living in China.

This news comes after a recent alleged incident.

African officials decided to confront China over racist mistreatment of Africans in the Chinese city of Guangzhou and other regions throughout the country.

As the virus continues to sweep the nation, black people living in China have faced more discrimination than ever.

Africans living in "Little Africa", which can be found in the Yuexiu district said they've been discriminated against and faced a lot of racism.

On Saturday, the US embassy was given some concerning information...

An alert from within stated that "police ordered bars and restaurants not to serve clients who appear to be of African origin," and that local officials have launched mandatory testing and self-quarantine for 'anyone with 'African contacts'."

However, Chen Yongqiu, Deputy Chief Police Officer of Guangzhou, told the press this:

"We appointed the same quarantine hotels and staff members. There is no discrimination or racism." But this new footage from a McDonald's restaurant begs to differ

New rules and regulations have come about as an outcome of China coming out of lockdown.

One McDonald's in the southern Chinese city of Guangzhou, has been temporarily shut down after it banned black people from entering the premises.

It reads: "We've been informed from now on black people are not allowed to enter the restaurant."

And you'll never believe the reason behind it...

It seems there has been a false myth circulating in China surrounding people of African heritage, insinuating that they are spreading the virus.

Obviously, people have been left shocked and outraged by the footage.

This user proposed this idea...

But being one of the major powerhouses of the world, China has an upper hand.

Another user shared this shocking image:

A screenshot taken and translated from Weibo, the main social media platform in the country.

While another shared this disgusting video:

@alexnjia @BBCWorld This is nothing compared of their museum that they have, comparing Africans to animals calling… https://t.co/zwYOG4ehYO
— Ivory 🐻🍓 (@Ivory 🐻🍓)1586863820.0

This section was allegedly named "this is Africa" and is part of a museum that compares black people to animals.

These views are highly dangerous, not to mention inhumane.

Racism has no place in our world.

Some people have gone to extreme lengths...

I know this behavior cannot be condoned, but there's no point fighting hate with more hate. We need understanding and change.

The footage itself is shocking.

Again, for those who still doubt that Black people and particularly #AfricansinChina are being targeted we feel it… https://t.co/mPmZc2BIzs
— Black Livity China (@Black Livity China)1586622584.0

And to take place in a global chain, such as McDonald's, is truly abhorrent.

McDonald's has now spoken out on the issue:

"As a brand, as a company and as more than 2.2 million people serving nearly 120 countries around the world, this is not representative of our inclusive values," the statement read.

"As part of the temporary closure of this restaurant, we will take the opportunity to further educate managers and employees on our values, which includes serving all members of the communities in which we operate."

We hope McDonald's take this issue as seriously as it should be.

For more on China and its controversies, scroll on...