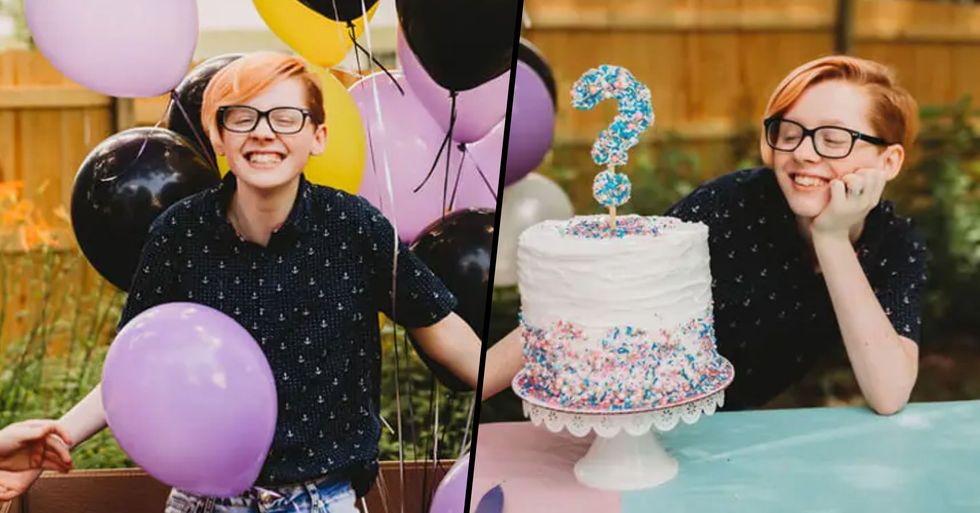 A mom organized a gender reveal party for her seventeen-year-old transgender son and it was truly the most heartwarming thing...

Let's start with the facts...

What exactly is gender dysphoria? Gender dysphoria involves a conflict between a person's sex and the gender with which he or she identifies with. People with gender dysphoria experience high levels of discomfort with their own bodies, and they often report feeling as if it isn't their own.

It is more commonly known as being "transgender."

People who are transgender more than often realize that they are from a very young age - children are able to experience gender dysphoria and this is when the majority of trans people realize this conflict.

It is a heartbreaking reality that many trans children face rejection from their families.

According to the Human Rights Campaign, studies have shown that familial rejection can lead to the LGBTQ+ youth engaging in behaviors and activities that endanger their health, trigger depression, and other mental health issues, and, in some extreme cases, can lead to homelessness and suicide.

Family support is one of the most important things for a child coming out as trans.

Coming out as transgender and beginning the transition will never be easy...

Despite this being what a person desires, the first few steps into transition are never easy, especially for a child. Enduring taunting in the school corridors from their peers who are too uninformed to understand the situation is a sad reality for many trans children.

Thankfully, the LGBTQ+ community is bigger than ever today.

There are countless organizations around the world that work hard together purely to support people, especially children, of the transgender community.

Families around the world are now more accepting than ever...

And one family recently did a very important thing to support their transgender son.

Love and Brandon Gwaltney are from Ohio...

And they share 3 children together... with a baby soon on the way!

Their seventeen-year-old son has recently made headlines, however...

And his story is certainly very unique.

Seventeen years ago, Grey wasn't born as a boy...

And it wasn't until very recently when he could start living as his true authentic self.

"The first thing we wonder about when we get pregnant (after all the holy crap! I'm pregnant) is, is it a boy or girl," she wrote. "We get so excited, picking out clothes and nursery decor based on the sex of our babies. We throw parties and pick out names. We assign attributes (like strength or beauty) based on what our child has growing between their legs. And MOST of the time, that works out perfectly fine."

Whilst Love and Brandon are expecting a new arrival...

They decided to re-do the original gender reveal that was intended for their son. "But sometimes, we force these expected characteristics based on biological sex, and *gasp* we've gotten it wrong. Normally, it's just off, but other times, that child you labeled a girl, doesn't actually feel like a girl. Sometimes that child disassociates who they are with the body they possess, and it can come across as body dysphoria or self-esteem issues and that's as far as it goes (to your knowledge)."

Grey felt like he didn't belong in his body for such a long time.

"Other times, that child grows up feeling like a completely different person, and if you're really lucky, they open up and tell you the truth, no matter how scary or daunting that could be."

Love then made an important announcement.

"We wanted to announce that we got it wrong 17 years ago when we told the world we were having a little girl, and named that child McKenzie," which was followed by some incredible photos from a gender reveal party the family threw especially for their son.

Grey was officially introduced to the world.

"So, we'd like to introduce you to our SON: Grey. He's much like any other seventeen-year-old nerdy boy, stays up way too late gaming, hates showering, and eats too much junk food. We will be referring to Grey with he/him pronouns from here on out, but he told us to tell you that he also doesn't mind if you use they/them."

The happiness on Grey's face is inspiring.

And it's clear that he's waited most of his life for this moment. "The colors of the balloons we chose for Grey match the Non-binary pride flag, and the cake layers are those that represent Transgender bodies, for those that are wondering," Love then explained.

The proud mom went on to clarify a few things...

"Grey approved of this post before I put it up, including the use of his dead name. This was a post meant to share with friends and family his transition mainly. Not expected to go viral," she explained. "Grey is also fully capable of making his decision on his pronouns and how he identifies. We in no way influenced him, we just provided him with a happy, healthy home where he feels like he can be true and honest."

And in regard to Grey's physical transition...

"IF Grey chooses to start testosterone, that is up to Grey and Grey alone. He is almost eighteen. However, Grey is non-binary and may choose not to. That is a journey for Grey and his doctor to decide on. Not for strangers on the internet to comment on. We are well educated on the effects of T. We do not need or want your Google degrees," she hit back at the people who began questioning her family's decision.

The family have received an outpour of love since their photos went viral but sadly, they have also received comments of negativity.

"While the major majority of comments have been so loving and sweet, the hateful ones (specifically the ones telling our entire family we will be going to hell) have no place on a thread meant to celebrate our son's transition. These bigoted, transphobic trolls are attacking a seventeen-year-old. And shame on you for that. Luckily our children are more woke and less hateful than those leaving negative, hurtful comments."

All that matters is Grey's happiness...

And it's clear that the teenager is now living his life in a much more free and comfortable spirit since coming out to the world as his authentic self.

He is very lucky to have such a supportive family...

And we wish the family the best of luck in their next happy chapter. Keep on reading to see how Dwayne Wade's son celebrated his transgender sister...