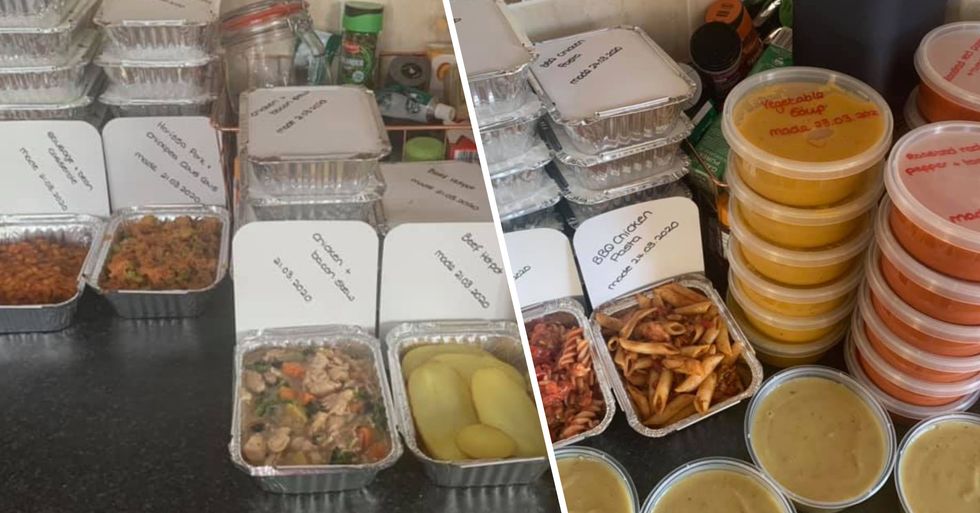 Everyone's priority is keeping their family safe and fed during this crisis, but for those who don't have people to care for them, or who are most at risk, things are looking pretty scary.

One woman has gone above and beyond for her local community, she spends day after day doing the most heartwarming thing for those that are too vulnerable to leave the house.

Self-isolation is something we're all coming to terms with.

Countries all over the world have gone into full lockdown, to prevent any further spread of the disease.

It's been spreading faster than anyone could imagine.

The disease can't spread if people are in isolation, effectively causing it to die out.

While medical researchers work tirelessly to find a vaccine, people who can stay isolated, and limit their time outside have been urged to do so.

It's been spreading notoriously easily...

Some people are lucky enough to take their work home with them.

But others have been forced to temporarily leave their jobs amid the health crisis, and have no option but to sit in their homes and think of ways to stay entertained.

Many are finding self-isolation rather boring...

We're all struggling with being cooped up in the house for so long...

Others are coming together to ride out this pandemic as a community, but some are going even further to help those in need.

One mom has gone above and beyond for her community.

The generous mom has opened up a soup kitchen from her own home, cooking up to eighty meals a day for vulnerable people in her community.

She has spent 10 hours a day cooking free food.

Sophie Mears, from Dorset, UK, has been cooking food parcels for people who are unable to leave their homes during this crisis.

Council officials told her she had to stop!

The good samaritan's act of kindness was almost shut down when council officials told her she needed a food hygiene certificate, and they couldn't give an inspection due to the health crisis.

Sophie could have easily stopped helping, and shut it down.

But she begged and pleaded with the authorities, to which they agreed to carry out a virtual inspection.

And obviously she passed with flying colors!

She earned herself a 5-star food rating, meaning that the elderly and vulnerable in her community could be fed once again.

The mom of 4 would usually be working at a local school.

But after being told to work from home, she joined her local Facebook community support group, which started off her new venture to feed those in need.

She has a whole support team behind her.

Someone is dedicated to going through social media messages, making sure everyone gets fed, while her partner Gary bags up the food and delivers. She has up to 8 volunteers making sure everything goes smoothly.

"It started a few weeks ago, somebody said there was a family in need of a meal so I provided a few bits for them and it just grew from there. Now I’m cooking a roast dinner for 80! My kitchen is not massive, it’s just a normal family kitchen. I’ve got several slow cookers so I have those going through the night and then in the mornings I do the bits I can’t do in the slow cookers. My garage has turned into a storage area with a couple of fridges and a chest freezer; people have just been amazing with donating all sorts."

Locals have donated food and money.

She says her children have all been great at getting on with schoolwork or playing quietly to allow her to spend the majority of the day cooking.

She clearly has a passion for what she's doing.

Sophie continued: "I have worked in catering in pubs and restaurants before and I’ve always enjoyed cooking. I’ve quite enjoyed finding new things to cook and I’ve learnt to do vegan and vegetarian too. The support has just been unbelievable and it just fills my heart with joy to know when I sit down at night for a meal with my family, I’ve been able to help somebody else have that too."

She has had endless support from her family and the local community.

Sophie is now churning out sixty to eighty meals a day, with over thirty deliveries being made to those who otherwise couldn't eat. She said: "I don’t feel like I’m doing anything special, just cooking." What a hero. Keep scrolling to take a look at what's launching to keep you occupied just that little bit longer...