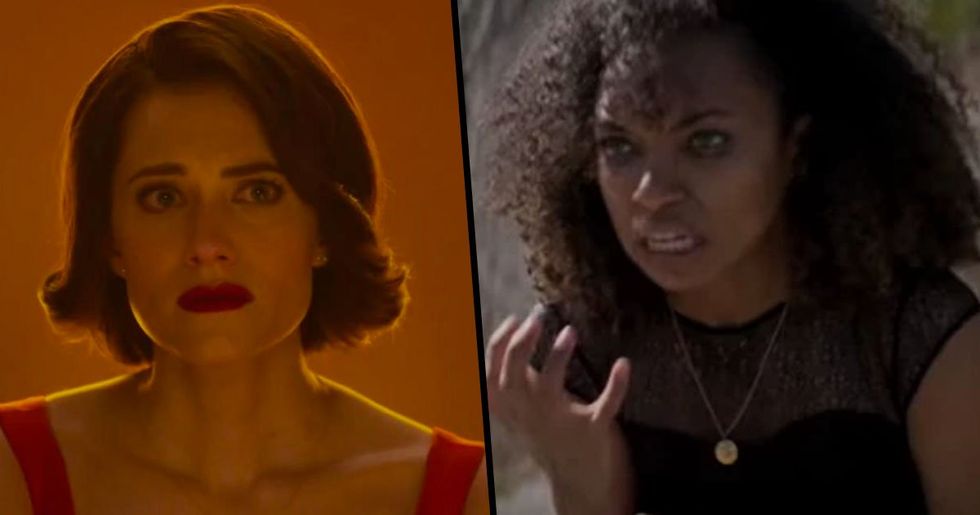 Annie Walton Doyle
Many horror fans had been largely dissatisfied with much of the modern entries into the genre, but this film has been extremely well received, both for its concept and performances.

You can always depend on Netflix to turn out new content that supersedes even their latest releases. But, in terms of horror, they particularly know how to push the envelope. Their latest release is being called their scariest yet - and the internet has had some pretty strong reactions.

According to the many who have boldly chosen to watch the horror movie, it has left them more than just terrified; they've been physically sick, too. Many report bouts of nausea upon seeing some of the most graphic scenes, which include one character throwing up maggots, bugs crawling underneath peoples' skin, and a particularly nasty encounter with a meat cleaver. Still tempted? We've got the trailer ready for you to watch through your fingers - if you think you can stomach it.

For some strange reason, there's something within us that enjoys feeling scared.

Perhaps it's the adrenaline rush, the suspension of disbelief, or the brief break from the stresses of reality. Whatever it is, it means that whenever a truly terrifying horror movie is released, the internet gets pretty excited.

And the latest movie that's got everyone talking?

It's directed by Richard Sheperd, stars Allison Williams and Logan Browing, people are calling the thriller the most disgusting movie ever.

Many went into viewing the film not knowing exactly what to expect.

Many thought that it may be a mystery thriller about cellists, potentially with some titillating lesbian content. But what they got was something quite different.

In fact, the content of this film has even got horror buffs cringing.

What starts fairly innocuously quickly descends into true body-horror chaos. Many are sharing the scenes that absolutely turned their stomachs.

In spite of these scenes, though, the internet is truly impressed.

Many horror fans had been largely dissatisfied with much of the modern entries into the genre, but this film has been extremely well received, both for its concept and performances.

Many fans report a visceral reaction upon viewing.

#ThePerfection was a wholly fucked up movie, and I mean that in a good way. I screamed, my skin crawled, and I didn… https://t.co/YewJj6fokk
— Calamity Caitlin (@Calamity Caitlin)1558759858.0

The body-horror in the film includes blood, gore, puke, and even diarrhoea - so let's just say that it's best suited for those with a strong stomach.

Many claim that it's best to avoid watching while eating.

Which makes sense, given what we know about the subject matter.

Others give the movie a more humorous summary.

The Perfection was literally Black Swan meets Get Out meets The Human Centipede on crack
— Gaby (@Gaby)1558754513.0

And based on this description, we've got a pretty good idea what you'd be getting yourself into. Although, if that sounds up your street, get this climbing straight to the top of your "to-watch" list.

there is a straight-to-netflix horror movie out right now that is queer and stars allison williams but you should N… https://t.co/q5T9wcV5y7
— queer girl (@queer girl)1559082427.0

Some - who presumably went into the movie not knowing what to expect - have told others not to make this same mistake, thanks to how incredibly gross they found it.

In fact, whether they loved it or hated it, the internet is pretty shaken up.

Just watched The Perfection on Netflix and felt sick pretty much the whole way through. Gory and disgusting 😂
— Linzi Saurus (@Linzi Saurus)1558911717.0

The majority of those who've watched the movie claim some sort of physical reaction to the film's most disgusting plot points - so perhaps if you feel nauseous easily, this is one to avoid.

Because nausea seems to be a common reaction.

But others have listed other physical symptoms after watching the movie, including headaches, migraines, dizziness, and even feeling faint. Pretty impressive results, we have to say!

If you're still curious, but worried about spoilers, Netflix has a solution.

The Perfection is impossible to explain without spoilers. We asked Allison Williams and Logan Browning to do it any… https://t.co/VtrQ61QeIO
— NetflixFilm (@NetflixFilm)1558906199.0

They shared this video of the film's two stars talking through the major plot points, but bleeped out any words that gave too much of the plot away. Even so, we can see that the movie is pretty disgusting.

Looking for a little more info?

Star of the movie, Logan Browning, shared this shorter video on Twitter, which gives you an idea of the film's more horrifying moments, without actually giving the whole game away. But if you're feeling particularly curious, we've got the trailer for you, too.

But just to warn you, even the trailer isn't for the faint of heart.

It contains some of the most graphic moments from the movie, condensed into just a minute and a half of absolutely terrifying content.

The Perfection is currently free to stream on Netflix - but don't say we (and the entire internet) didn't warn you! If this doesn't entice you, then consider some of the other great offerings available on everyone's favorite streaming platform! We've even ranked our faves for you, you lucky things. Here we go!
From Your Site Articles