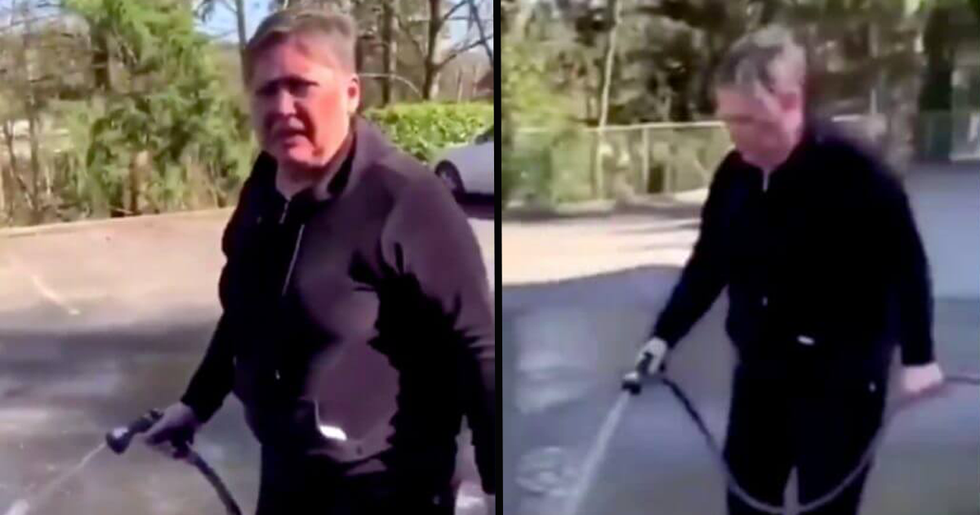 Being a mom isn't easy. You have to be calm, cool, and collected. But what would you do if someone decided to make your child cry by ruining hours of hard work and dedication just because she felt like it?

Well, this one mother jumped to action to defend her daughter after "Sidewalk Susan" used a pressure hose to wreck all of her artwork.

Keep scrolling to see the full video. It's utterly heartbreaking.

There's nothing quite as rewarding as motherhood...

There are many things that make parenthood irritating...

But there's one thing pretty much every mom out there can relate to and that is constantly fighting for your kids, no matter what.

There's no such thing as a perfect child...

And at some point during our kids' lives, they will make sure to make our lives as difficult as possible but you still love them regardless.

So, what would you do if someone made your child cry?

There is a certain type of anger that only a parent can relate to and that's when someone hurts your child.

And what makes it worse is when it is intentional.

Well, this one mother jumped into action when her child's chalk artwork was hosed down by a random lady now known as "Sidewalk Susan."

During the pandemic, it can be hard to keep children entertained...

But giving them a little bit of freedom (while still maintaining social distancing measures, of course) manages to keep them preoccupied for a few hours.

And that's exactly what this mother did when she let her child use chalk to draw on the ground.

The mother and daughter duo are in what seems to be an empty parking lot outside of their home.

And after spending a lot of time and dedication on her work...

Another woman who also lives nearby decided to come out with a pressure hose and spray down all the cute, chalk pictures.

Even when the child starts to cry, "Susan" continues to wreck havoc.

And it was all because she didn't "want to look at this mess."

Even when the mother told her to look away, she didn't stop.

As her child continues to cry, she tries to defend her but it doesn't work.

I mean, this absolute grinch of a woman has to be even worse than "Can I Speak To The Manager Karen" and "BBQ Becky."

The Twitter user that posted the video onto the platform was less than impressed...

She put in the caption: "White women dead ass love bothering ppl out of boredom like how the hell does a child drawing chalk on the driveway gets you upset lmfaooooo."

What could have upset her so much that she had to do something as disgusting as this?

Rightfully, other Twitter users jumped into the comment section to express their utter shame at her behavior.

One user wrote this:

That is no excuse to do what you did, "Susan."

This user was more than just confused...

We commend the mother for being able to stay clam.

Because I really wouldn't be able to. It's beef on sight if I ever come across this lady.

Others have gone to the trouble of coming up with more names for these women.

"Downtown Abby" is really good, to be honest.

It's heartbreaking to watch, isn't it? We hope "Susan" gets what she deserves. Keep scrolling to read a happier story about how this other mom is making the most of her time now that she's out of work...