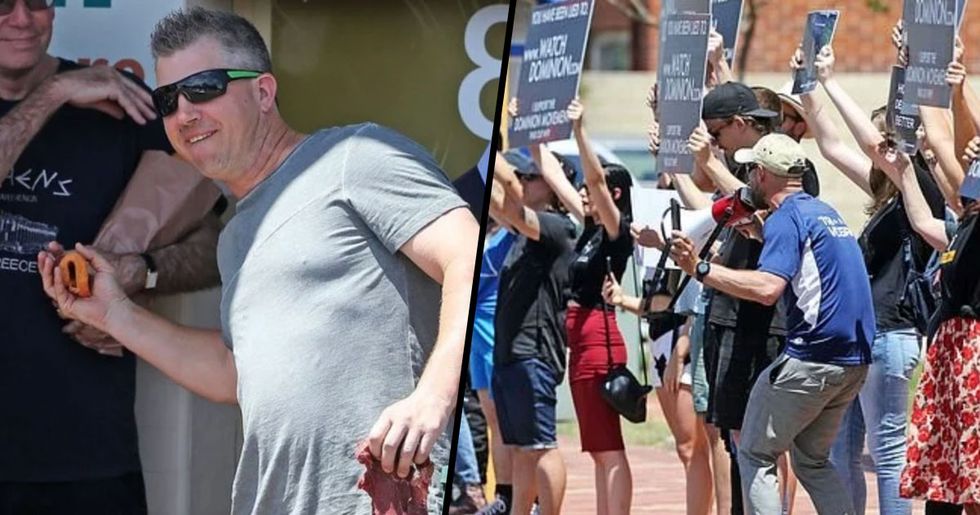 Today in 2019, we are certainly no strangers to vegan protesters and animal rights activists.

More and more people are choosing to adopt a vegan and cruelty-free lifestyle, and many of these people feel the need to protest their beliefs strongly in the face of those who continue to eat meat and dairy... and not everybody appreciates these protests.

A militant vegan protest took place in Perth, Australia on Saturday and local meat-eaters weren't happy about this at all, leading them to throw raw meat at the stubborn protesters.

It is a lifestyle choice.

A lot of people openly follow a vegan lifestyle...

According to The Vegan Society...

If the world went vegan, it could save 8 million human lives by 2050, reduce greenhouse gas emissions by two thirds and lead to healthcare-related savings and avoided climate damages of $1.5 trillion.

So being vegan isn't just about not eating animals...

Many believe killing animals and consuming animal products is completely unnecessary towards maintaining a healthy and nutritional diet.

But not everybody agrees with this...

Whilst it is hard to ignore the fact that a lot of farming methods are now considered inhumane and cruel, the consumption of animals has been going on for hundreds of thousands of years and it is a part of our natural food chain.

If we were to completely stop farming animals...

Not only would we put millions of people out of business and work, but over-population would very quickly occur and it would be extremely difficult to keep on top of this.

A lot of people feel this way...

And when groups of vegans protest their beliefs, it is guaranteed to cause a stir.

A vegan protest was held in Australia over the weekend...

The protest in Inglewood, Perth was held outside of celebrity chef Vince Garreffa's Mondo Butchers on Saturday morning.

Since Garreffa obtained his butcher license in 2010, he has continuously sold horse meat at Mondo Butchers - a practice that is usually illegal in Australia apart from exemplary licenses such as the one Garreffa holds.

Around twenty members of the Direct Action Everywhere animal rights group gathered outside Mondo Butchers in the forty-degree heat and held up signs protesting the selling and consumption of meat.

"It's not food, it's murder," the protesters chanted outside of the butchers...

"Stop the killing! Stop the violence! Fight with us!" one of the protesters also shouted through a megaphone.

The activists weren't left alone to their protests for long, however...

Supporters of Mondo Butchers assembled to protest against the activists, and many came armed with meat to taunt the vegans.

Some of the onlookers even began to throw meat at the protesters.

Some of these onlookers highlighted the hypocrisy of some protesters, who were noticed to be wearing leather bags and shoes.

Owners and staff of Mondo Butchers were unphased by the protests...

The butcher's owner and well-known chef Vince Garreffa told Daily Mail Australia that he was overwhelmed with the amount of support him and his shop has received.

Garreffa felt that the vegans were wasting their time...

"I couldn't believe they would waste so much time attacking individual farmers and butcher shops," he said.

The police eventually had to intervene and move the protesters...

"I couldn't believe the number of farmers, butchers, and members of the local council who came to support us. It was so humbling that I got emotional a few times," Garreffa went on to say.

Garreffa spoke of how he is usually prepared for such protests...

He even admitted to buying 3 speakers and hiring a DJ to drown them out. "Every time they tried to do their horrible speeches we drowned them out for an hour, it was the most successful fight," he said.

He even offered the protesters water due to the scorching heat, but they refused...

"They're an arrogant bunch. They don't represent all vegans. These people have no respect they called us some vile names... They're very rude and very spoilt," Garreffa said about the activists.

But in similarity to many, Garreffa doesn't think this will be happening any time soon. "All the protesters worry about saving lots of animals but don't think for one minute you are on the higher ground, because there are animals that we grow for food and that's the way the world works," he said.

Watch the footage of the protesters in action here...

Keep scrolling to learn more about the vegan who took her neighbors to court to stop them from cooking meat on their BBQ...