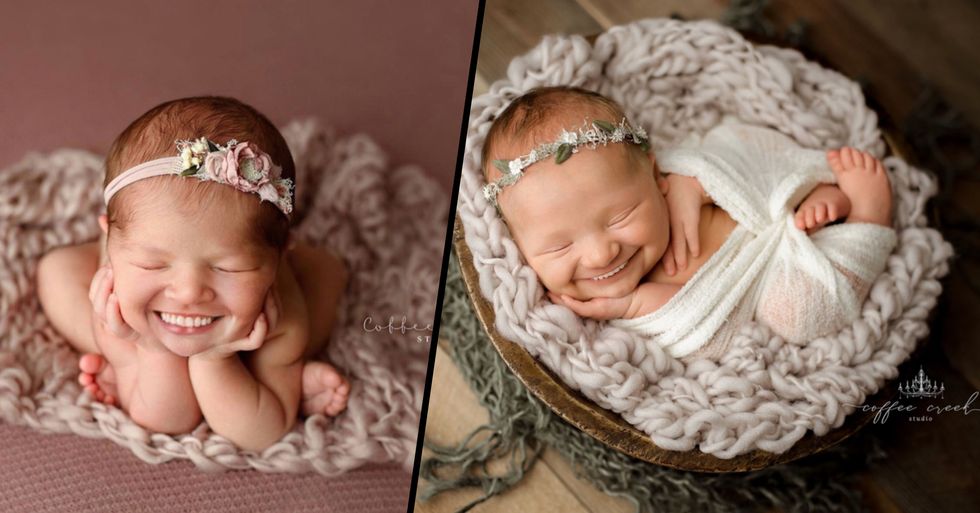 A photographer has made our nightmares a reality by photoshopping full sets of adult teeth into the photos of newborn babies... And they're the spooky, yet hilarious addition to our lives that we never thought we needed.

Keep scrolling to see a selection of her finest work - though be warned, they will plague your mind for the rest of the week... Or the month.

What is it that's just so cute about newborn babies?

Everyone thinks babies are cute... And if you don't agree, you're either lying to yourself or you're simply a monster.

There's something so pure about them.

It could be their tiny little feet, or their small, hairless heads...

Or is it their adorable, toothless smiles?

One of the main characteristics of newborn babies is their big, gummy smiles.

So the idea of babies with teeth is a little bizarre, to say the least.

Because babies are born toothless, picturing a baby with a full set of pearly whites can be a little unnerving.

But one photographer decided to make this idea a reality...

By photoshopping full sets of teeth into the smiling mouths of toothless, newborn babies. It sounds eerie, I know.

And her business, which is based in Shelbyville, Indiana, specializes in wedding photography and, primarily, newborn baby photography.

A large chunk of Amy's work revolves around newborns...

So, as you can imagine, she's seen a lot of them.

So her mind began to drift...

And she started to wonder what a cute little newborn would look like with a hefty set of chompers. Just another day in the life of a baby photographer...

So, Amy decided to get creative...

And have a little bit of fun with her sleepy models.

She took her toothy idea...

And made it a reality by photoshopping sets of pearly whites into the mouths of her models.

And the results are nothing short of fantastic.

Newborn babies, smiling proudly with their sparkly whites. What's not to love? Or be completely terrified by?

The inspiration behind her idea was simple.

"I just thought it was so funny," she told Cafe Mom, "And would be a great way to put a smile on people's faces - literally."

And, with a little help from the face-altering app, FaceApp, she managed to give the babies devilishly hilarious grins, complete with full rows of adult teeth.

The photos were quick to go viral, and have since been shared on Facebook over 50,000 times with over 70,000 reactions and comments.

The babies were catapulted to viral stardom because of their sparkling smiles...

The photographer said that neither she nor the parents of the babies, "anticipated them going viral, but they have all been very understanding and I've kept communication lines open with them to keep them informed throughout this whole thing."

Amy thinks the success of her photos is down to one thing...

"I think these photos were popular with people because it is so different from the normal way babies look and they're quite hilarious," she explained.

And she believes that they stand as a reminder that we're lucky babies aren't born with teeth.

"I think we all realize why babies aren't born with a full set of teeth!" she said on the creepiness of the edited snaps.

But I'm sure this little girl is adorable without those pearly whites...

Amy is pleased with the variety of photos...

As some look scarily realistic...

And others look just plain goofy.

"I loved having a variety of images in the album ... some that were obviously awkward but then some that looked so natural you almost wouldn't notice what is off about the photo!" she explained.

And Amy is just glad that she could spread the laughter.

"I love making people laugh and try to encourage that in any way I can."

And she wishes she could have edited all of her photographs...

But that would have simply taken too long. "I could have gone back and done this to every single baby that has ever come in my studio. Can't. Stop. Laughing."

Okay, these photos will be haunting us for a while...

To distract yourself from the horrors of these toothy infants, keep scrolling to see a rather toothy Eminem... After someone had photoshopped his permanent frown into a smile. Enjoy.