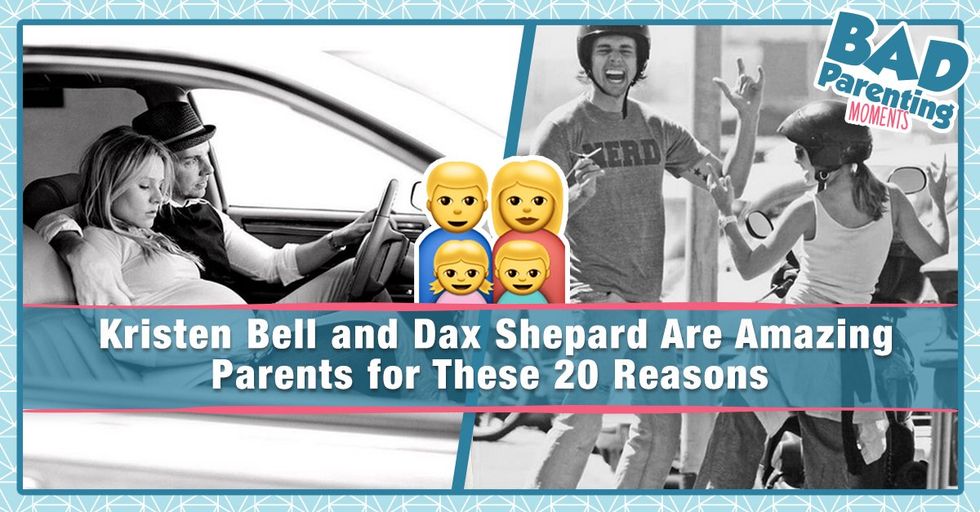 If you ever need convincing that love is the real deal, look no further than Kristen Bell and Dax Shepard. This precious couple has been stealing our hearts for some time, and they’re not stopping now!

With two daughters and lots of joy, they are absolutely parenting goals. In large part, it’s because they put in the work to do this, and make an amazing team.

So, to see what makes this family so special, take a look at this list of things the Bell-Shepard clan does well!

They want the best for their kids, regardless of their own celebrity status.

The Shepard-Bell family posts photos from home, but they’re always careful not to post photos of their children’ faces.

They can indulge their kids’ sense of fun!

In this scenario I'm "Little Sister," and my 3-year-old daughter was "Big Brother." My 5-year-old was "Mommy," and damn was she strict :) -daxshepard

Dax Shepard rightly claims to be a #dadbeast.

Although I don’t know how much longer he resisted that sickness!

They know how to take time and appreciate each other.

She appreciates even the parts of pregnancy that most disparage because the whole process of having a baby is pretty amazing. (Lincoln is her eldest daughter, btw.) Next up, some quality parenting advice straight from the source!

Kristen doesn’t let rough days get her down.

Bell told Babble: “If my child is acting a fool in the grocery store, the embarrassment is on her. In truth, that shouldn’t make me feel a certain way. She’s going to act the way a child acts, and I’m not going to let that reflect on me or bring me down."

Dax Shepard has a sense of humor about his Costco runs.

Everyone knows Costco is where the party is at!

They know how to keep their cool—by tag-team parenting!

Kristen Bell told People: “We switch kids all the time. [If] I’m talking to the [two-year-old] and I’m done, I’ll just be like, 'We’ve got to switch. I don’t want to talk to this kid anymore.’"

They both get their hands dirty.

Changing diapers is never fun, and ideally, both parents are prepared to do it!

And Kristen Bell makes an effort to teach her daughters important life lessons.

Leading positively by example and showing her kids that they can, too. Now that’s motherhood! Dax Shepard has some pretty poignant advice too, on the next page!

They’re firm when it comes to the health of their children.

The couple is pro-vaccine, and they enforce that when it comes to their daughters. Bell told The Hollywood Reporter: “When Lincoln was born [in March 2013], the whooping cough epidemic was growing, and before she was 2 months old, we simply said [to friends], 'You have to get a whooping cough vaccination if you are going to hold our baby.’"

Dax Shepard shows his appreciation to the women in his life!

This was in honor of International Women’s Day, but it’s obvious he loves his family all day, every day!

The pair knows how to have a date night!

No joke, that looks like a ton of fun. Next up, take a look at the adorable birth announcements made by both Dax and Kristen, plus a hilarious video you don't want to miss!

And how about this tweet of Kristen’s announcing the birth of her daughter?

It’s cute, and it’s a burn! The best kind of announcement.

She made another funny post for the birth of her second daughter.

He actually had some witty remarks of his own after the birth!

And their daughter was born just before Christmas!

Both parents make an effort to be attentive and honest with their kids.

And last, but not least, they picked the best (and goofiest) way to usher in the era of parenthood!

Kristen and Dax took one last trip before having kids, vacationed in Africa, and cut together a film of the highlights set to "Africa" by Toto—because obviously, that’s what you do! They’re as sweet as they are silly. Share this story with other parents to trade around some parenting inspiration, or just share it with fans of Kristen Bell and Dax Shepard. Which, let's face it, is pretty much everyone!