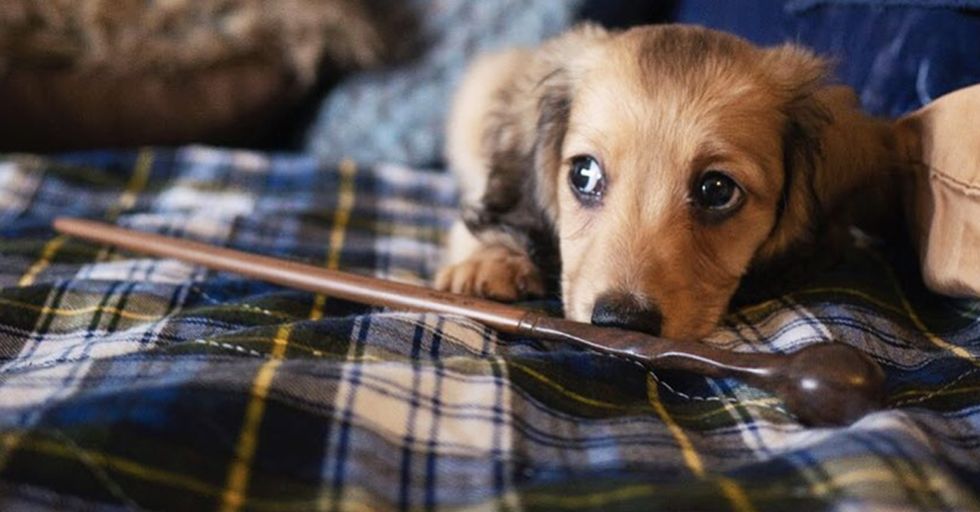 We may not agree on everything, but if there’s one thing we can all stand behind, it’s videos of animals doing amazing things. Add in another crowd favorite, like Harry Potter, and you'll get the new wonder of the Internet. Remus the Doxie is just that – he performs various tasks by way of spells from the wizarding world.

Actress and Youtuber, Anna Brisbin shared a video of her puppy on Twitter and we cannot get enough. Also, how clever of her to teach her dog these tricks using Harry Potter spells? I am legit impressed and jealous that I didn’t think of this first.

Wearing a Hogwarts vest and tie, Remus has enchanted the Internet and impressed Harry Potter fans around the world. Let’s get to know him a little better because my Potter senses tell me this won’t be the last we hear of Remus.

Remus the Doxie, as he's known on Instagram, has been trained to respond to commands as 'Harry Potter' spells since he was 2 months old.

His wand just made him extra adorable.

He was named after one of the characters in JK Rowling’s book, Professor Remus Lupin who taught The Defence of the Dark Arts at Hogwarts School of Witchcraft and Wizardry.

I don't know about you, but I am charmed by this doggo.

Here he is still in character on Halloween dressed as a wolf.

If you're a self-proclaimed Potterhead, then you'll know that Professor Remus could transform into a werewolf. Naturally, this was a perfect costume for Remus as he should always stay in character. That's show biz, baby.

In the now viral video, Remus is seen wearing a tiny vest and tie while performing tricks, just like a Hogwarts student.

Remus' owner, Anna Brisbin shared her Youtube video of him performing his tricks to Twitter. The video has been viewed more than 5 million times. Also, he's obviously been sorted into Gryffindor.

“Oh, you trained your dog in German? Coolcoolcool, I trained my dog in 'Harry Potter' spells."

Brisbin waves a wand around as Remus perform his tricks to make their "magic" more legit.

Remus is the magic we all need.

I've seen the video a dozen times and I can't get enough of it. It's pretty high on the list of my favorite Internet finds, and here are some of my favorite spells.

Here he plays dead after the killing curse command.

Remus adorably lays down after this spell.

This is the levitation charm and in the video you can see Remus balance on his hind legs.

Here Remus fetches his ball. I think he deserves all the good boy awards.

I don't need any commands to eat food but i may start saying "engorgio" before every meal for fun.

Aguamenti is the spell used to produce water with a wand and it's also the command for Remus to take a tinkle in a patch of grass. Anna Brisbin, you are too clever!

This is the freezing charm. Remus sits and stays. You guys, a tear of joy is rolling down my cheek. This is too cute!

Remus is the worlds most magical dog and we are all here for it.

The enchantment has spread all over social media because who doesn't love dogs. And finding a dog as cute and as smart as this dapper little guy is pretty rare.

Is there a limit to the amount of House points one can give, cause I'm giving them all to Remus. Sorry, Harry.

Everyone wants to give him all the points!

And after, he's going to get all the petting. Best good boy!

Anna asked her Twitter followers to share pics of their pets that are also named after a Harry Potter character.

Guess what? Now we get to see other cute animals. This is what social media is for.

The adorable misfits Luna and Neville.

I like to think Neville and Luna ended up together and this is probably as close as I'll get to that reality.

Coincidentally, there is another dachshund named Remus that lives in Detroit.

Somehow, Remus and Remus from Detroit should meet.

Well yes, I do consider a Quidditch broom a character.

I bet he can move as fast as Nimbus if he sees a squirrel he wants to catch.

Something about this dog does remind me of this character.

Good Dobby. Dobby will get all of the petting.

At least she's not a giant spider.

Spiders are not my jam but this is cool.

This cutey is named after the young wizard.

I can actually see a resemblance.

Harry's snowy owl is cool, but check out this Chinchilla named Hedwig.

Be right back, I'm going to go talk my husband into getting a pet Chinchilla.

Of course, here we have a pet that's team Slytherin.

This spotted python should fit right in with House Slytherin.

Remus and Anna have made a lot of friends on social media.

Their video is even trending at gas stations. If this doesn't get some people to be nicer on the road, I don't know what will.

Remus has a very close cat friend that's named Torrie which is short for Dementor.

Here's Torrie ready to do what cats do best to dogs, consume all of their joy.

After a long day of magic, Anna and Remus hang out and cuddle.

Can someone teach me the Harry Potter spell to get my kids to sleep? That would be great.

I have a suspicion that this won't be the last we see of Remus.

Pretty sure they're working on more magic tricks. For now, let's keep enjoying the most adorable video on the Internet so far.