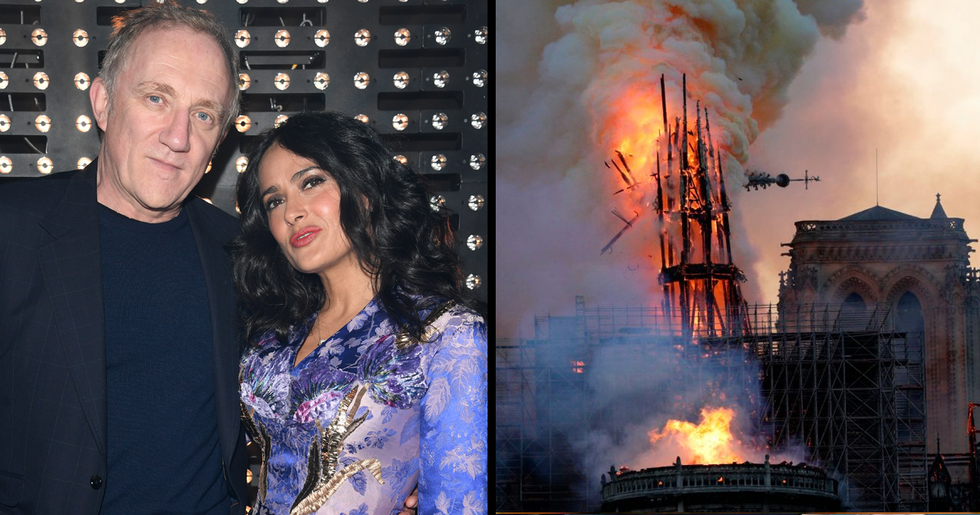 The world has been left in shock after a cultural and historical landmark almost burned to the ground yesterday.

The infamous Notre Dame cathedral based in Paris, France is an iconic piece of the countries history.

Recognised as a tourist attraction and a piece of architectural beauty, the building was even an inspiration for Victor Hugo’s The Hunchback of Notre Dame.

However, the 850-year-old French landmark unexpectedly caught fire last night, destroying the interior of the building and leaving a charred skeleton.

The primary structure of the church has been left intact but it could take months until it is restored back to its original form.

And, a lot of money.

Fortunately, people are prepared to make sure this happens including a few famous faces.

Read on to find out who has offered to help.

Notre Dame is often recognised as the most beautiful landmark in France.

An artistic inspiration, the church has survived centuries of war, rebellion and plague.

But it seems that 2019 almost marked the cathedral’s end.

However, it survived the blaze.

Although there has been a lot of damage, the cathedral’s primary structure still stands, meaning it could be salvaged and rebuilt.

But it won’t be cheap.

According to Valerie Pecresse, president of the Il-de-France region, rebuilding the church will not be a cheap endeavour.

Pecresse also stated that the cost of rebuilding Notre Dame could lead to problems for the entirety of France.

Pecresse said: "This reconstruction, which will obviously be very expensive, will mobilise a whole country."

But they're still going to try.

Mayor of Paris, Anne Hidalgo, has announced she wants to enact an international conference for anyone who wants to donate to the cathedral’s reconstruction.

And the cathedral will need specific materials.

Due to the age of the building, it is expected that it will need rare and specific materials to help its construction. Various French lumber companies have already offered to provide the lumber needed.

But what about the rests of the cost?

It turns out that some famous faces are keen to see the landmark restored. Such as Francois-Henri Pinault, husband of Hollywood actress Salma Hayek, who pledged 100 million euros to the building’s rebuild.

And he’s not the only one.

Although Pinault’s donation is admirable, it seems some people are ready to outbid his offer.

Who can argue with the richest man in France?

Another key donator comes is Bernard Arnault, the owner of LVMH - Louis Vuitton Moët Hennessy. Recognised as the richest man in France, Arnault has pledged 200 million euros to the cause, doubling Pinault’s offer.

The Arnault family are also ready to take charge of the operation.

In a statement from the Arnault family, they said: "The Arnault family and the LVMH group, in solidarity with this national tragedy, are associated with the reconstruction of this extraordinary cathedral, symbol of France, its heritage and its unity."

They will make sure that Notre Dame is restored.

They also announced that the project will receive all that they have to offer. "In the meantime, the LVMH Group puts at the disposal of the state and the concerned authorities all its teams, creative, architectural, financial, to help the long work of reconstruction on the one hand, and of fundraising on the other hand."

But more people are also trying to help.

Beyond the rich and famous, various historical societies and foundations are trying to earn money for the restoration of the landmark.

Even the French President has spoken out.

Emmanuel Macron has also spoken out about the tragedy, announcing he has started enlisting the world’s ‘greatest talents’ to help restore the church.

With all the love and charity being shown in the face of this national tragedy, let’s hope that the cathedral will be returned to its former glory soon.