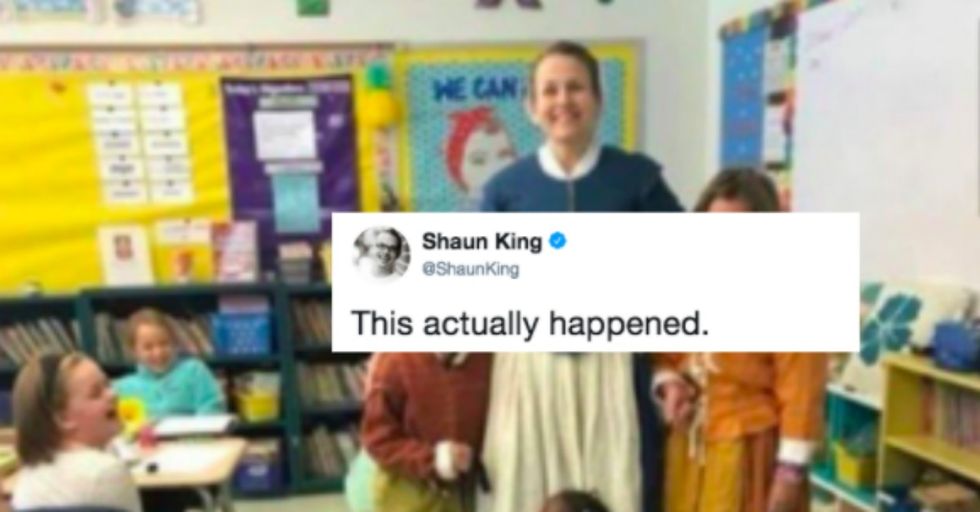 The Bridgewater-Raynham Regional School District apologized on Thursday, October 19 after an offensive photo went viral, according to The Enterprise. Though the photo meant to depict a "pilgrim family," the photo showed a "white woman, dressed as a pilgrim, with her arms around two white children, also dressed as pilgrims. The two children appeared to be holding 'leashes,' which were attached to a young African-American girl kneeling on the floor in front of them."

It was not great, to say the least.

Employees from Plimouth Plantation, a "living history" museum, was presenting a lesson on 17th-century attire to a third-grade class when this photo was taken and shared with parents.

Obviously, the photo struck a chord because it appears to depict the young black girl as a slave. According to Rob Kluin, the director of marketing and communications at Plimouth Plantation, said the garment that the girl is wearing in the photo was a common piece of clothing for toddlers to wear in the 17th century. It has "leading strings" which were used to keep the toddler safe and to guide young kids who were just learning to walk. That's not evident when you glance at the photo without context, however. The photo was shared on Facebook and immediately went viral, garnering over 8,000 shares in just a few hours.

The school district issued an apology, providing context for the photo and apologizing for the "unfortunate incident."

The mother of the girl kneeling in the photo also provided clarification in a Facebook post: "I spoke with my daughter who said the teacher brought in Pilgrims to teach them about Pilgrim life. The lady in the picture is one of the Pilgrim [sic]. My daughter said they asked for someone to volunteer as a baby and she did. And it was the Pilgrim lady's idea for her to kneel on the floor and the others to hold the leash." While the situation may be clarified now, let's all think about how we move through the world. It's important.